Large Cents are universally loved by coin collectors in America. An important issue is the 1793 Large Cent. It was one of the first coins struck by the U.S. Mint and comes in three types: the "Chain" Cent, the "Wreath" Cent and the "Liberty Cap" design. Large Cents were minted between 1793 and 1857.

APMEX carries a wide selection of rare pennies, including several variations of Small Cents. Which include Flying Eagles, minted between 1856 and 1858. The demise of the Flying Eagle gave rise to the Indian Head, minted from 1859 and 1909. Rare Wheat Pennies are an iconic 20th-century one-cent piece minted between 1909 and 1958, the longest-running coin series in the U.S. Wheat pennies are also commonly known as Lincoln pennies due to the bust of Abraham Lincoln on the obverse. Wheat Pennies are great coins for novice numismatists to start growing their collection or for experienced collectors to diversify their portfolio.

APMEX offers a superb selection of Flying Eagle pennies. Released in 1857, Flying Eagle pennies were created to replace the unpopular large-sized Copper pennies. Called “nicks” because they now contained nickel instead of just Copper, Flying Eagle pennies have proved extremely popular over the decades, especially since it is such a short series. The 1856 Flying Eagle cent is technically a pattern coin, but due to its popularity and large mintage (for a pattern), it has been widely collected. It has also been widely counterfeited. The original mintage of this date was estimated to be 1,000 coins but has been updated to approximately 1,500 to 2,500 coins. The 1858 has both large and small letter designs.

The second of the U.S. “small cents,” the Indian Head is one of the most popular U.S. coins ever struck. The obverse features Liberty wearing a feathered headdress, while the reverse depicts a wreath encircling the words “one cent.” Minted between 1859 and 1909, these popular pennies came in various metals. In 1859, a copper-nickel cent with a laurel wreath reverse was first minted. It was followed by a copper-nickel oak wreath cent that was minted between 1860 and 1864. During 1864, both copper-nickel and bronze pennies were minted. Finally, bronze pennies were minted between 1864 and the end of this series in 1909.

A major event in the life of Wheat Pennies is the alteration of its metal content made in 1942 and 1943. While all Americans generally think of Copper pennies and believe that pennies are made of pure Copper, that is not accurate now and has varied many times throughout history. During the conflicts of World War II, facing enemies on both the Eastern and the Western fronts, the government determined that it needed all the copper and tin in the country to put towards munitions for the war effort. In 1942, the United States Mint removed all but a trace of tin from the alloy used for the Wheat Cent, which technically speaking changed the metal from bronze to brass. Further, because the Mint had a supply of existing bronze coining strip already prepared, the Lincoln Cents of 1942 are made from both alloys. 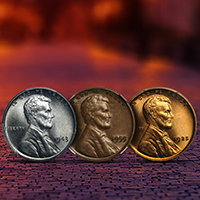 What is a Wheat Penny? 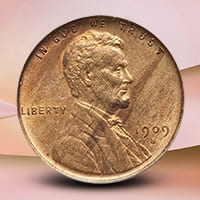 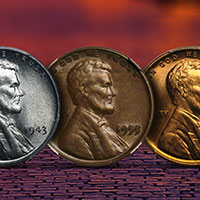 What are Pennies Made of?