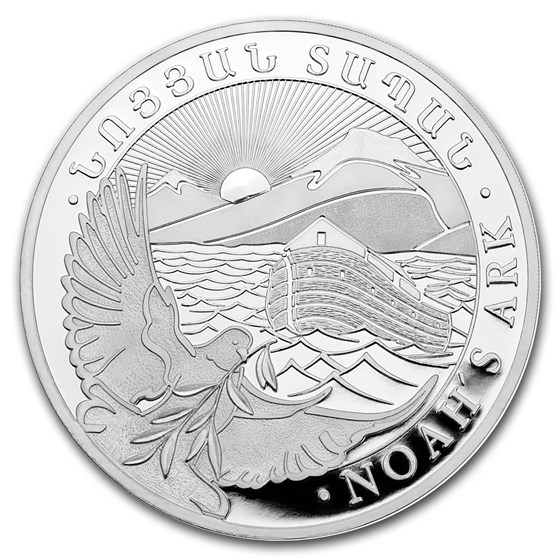 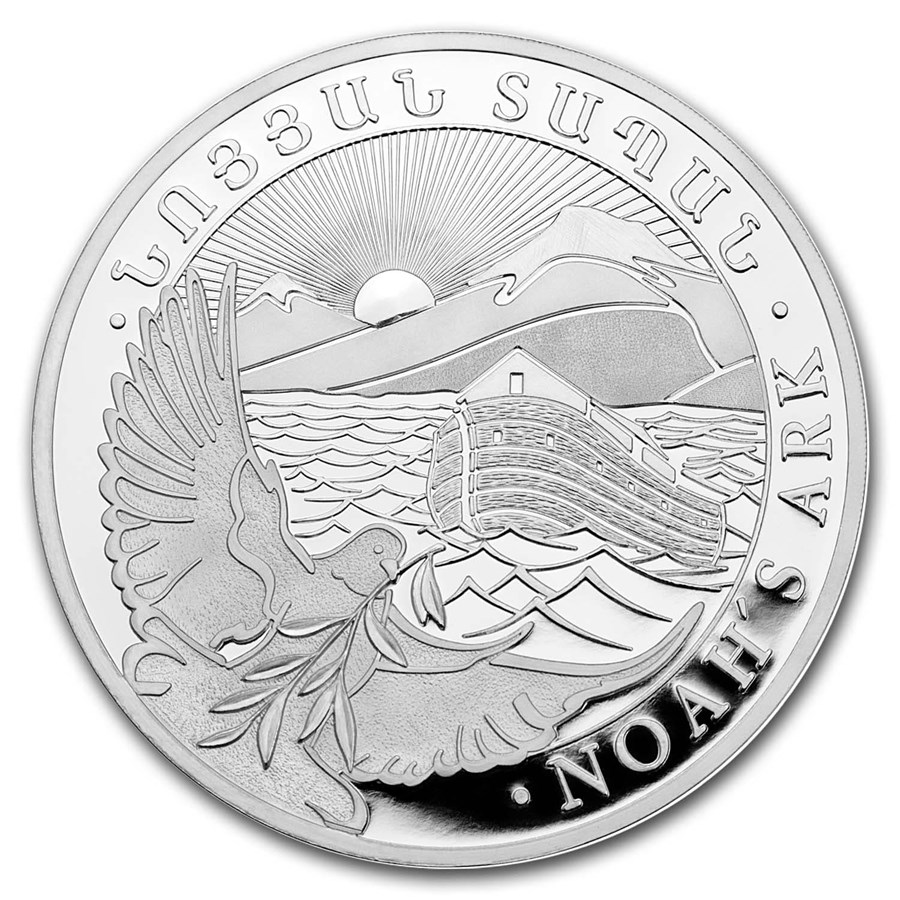 Your purchase will match the quality of the product shown.
Product Details
Product Details
The Noah's Ark coin features supreme minting quality and purity produced by one of the most modern private mints of Germany. Each coin is legal tender at its face value and is issued by the Central Bank of Armenia.

Coin Highlights:
Add the perfect presentation box to your order.

The Armenian Noah's Ark Silver coin series honors one of the most iconic stores of the Bible. Add this 2019 Armenia 1 oz Silver 500 Drams Noah's Ark coin to your cart today!

Officially authorized by the Central Bank of Armenia, well-respected private mints in Germany produce these impeccable Noah's Ark coins. The Noah's Ark Silver bullion coins are made from .999 fine Silver, available in a variety of sizes, with the 1 oz version being the most popular. The obverse exhibits the coat of arms of the Republic of Armenia, together with the face value of "500 DRAM" and the year of minting. The coin’s reverse depicts Noah’s Ark, a white dove with an olive branch at the beak and Mount Ararat. The morning sun coming over the horizon is shown in the background.

Noah´s Ark is an artistic representation of Armenian history, deeply rooted in the European civilization and culture. As told in the Christian Old Testament, the Ark was built by Noah as directed by God, to save his family and the creatures of the world in the great flood that would become legendary throughout the world. This classic tale is enjoyed by both children and adults, which is why it was chosen as the theme for Armenia’s own Silver bullion coinage.

The Story of Noah’s Ark Coins from the Armenian Mint

As the story goes, after Noah’s family and the animals are safe on board, a flood comes, rising higher than all of the surrounding mountains eventually covering the entire Earth. As the flood waters recede, the Ark rests on the very top of Mount Ararat. Noah, his loved ones and the creatures leave the Ark to repopulate the Earth. This epic tale is a perfect fit for striking on a Silver coin for many reasons. Silver has been used as currency for thousands of years, so representing a story that has been around for a similar period gives the Noah’s Ark coins a spirit of historical significance.

The artwork used was designed by Eduard Kurghinyan and includes a dove in flight with an olive branch and Noah’s Ark floating safely on the waters surrounding Mount Ararat. These Armenian Silver coins offer something truly unique to collectors, as they are one of the only series in the world created with widely known religious imagery.

The 2019 Silver Noah’s Ark Coin series pays tribute to one of the most iconic stores of the Bible, loved by children and adults.

Noah’s Ark Silver Coins and the History of Armenia

The Republic of Armenia gained its independence in 1991 during the dissolution of the Soviet Union. The Republic of Armenia recognizes the Armenian Apostolic Church, the world's oldest national church, serving as the nation's official faith. Armenia is now a part of the Eurasian Economic Union and the Council of Europe. The famed biblical narration of Noah's Ark was chosen as a theme for its bullion coin as a reflection of the country’s history. At the end of the tale, as told in the Christian Old Testament, God puts a symbolic rainbow across the sky and makes a promise with Noah and all living things that he would never again send a flood to destroy the Earth. The Armenian Republic uses this legendary promise to add a seal of guarantee to the Noah’s Ark bullion coins, with an assurance of high quality and beautiful finish.

Silver bullion coins depicting the epic story of Noah’s Ark serve as a worthwhile investment and also a symbol of our world’s history. The legend is included as part of the oral tradition of all major religions, teaching a valuable lesson about protecting your resources. That wisdom certainly applies to investing in Precious Metals, giving you the chance to talk about the subject with your younger heirs and loved ones. Owning Silver coinage is a great way to begin a portfolio of safe, low-risk holdings.

I add two or more to the collection each year.

These are the nicest eye-catching bullion I've ever owned. The detail of the waves, and the dove is just amazing. Might even be nicer than say, Mexican Libertads.