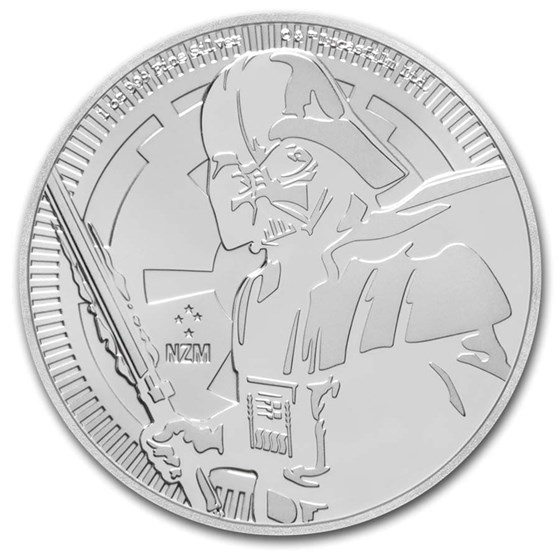 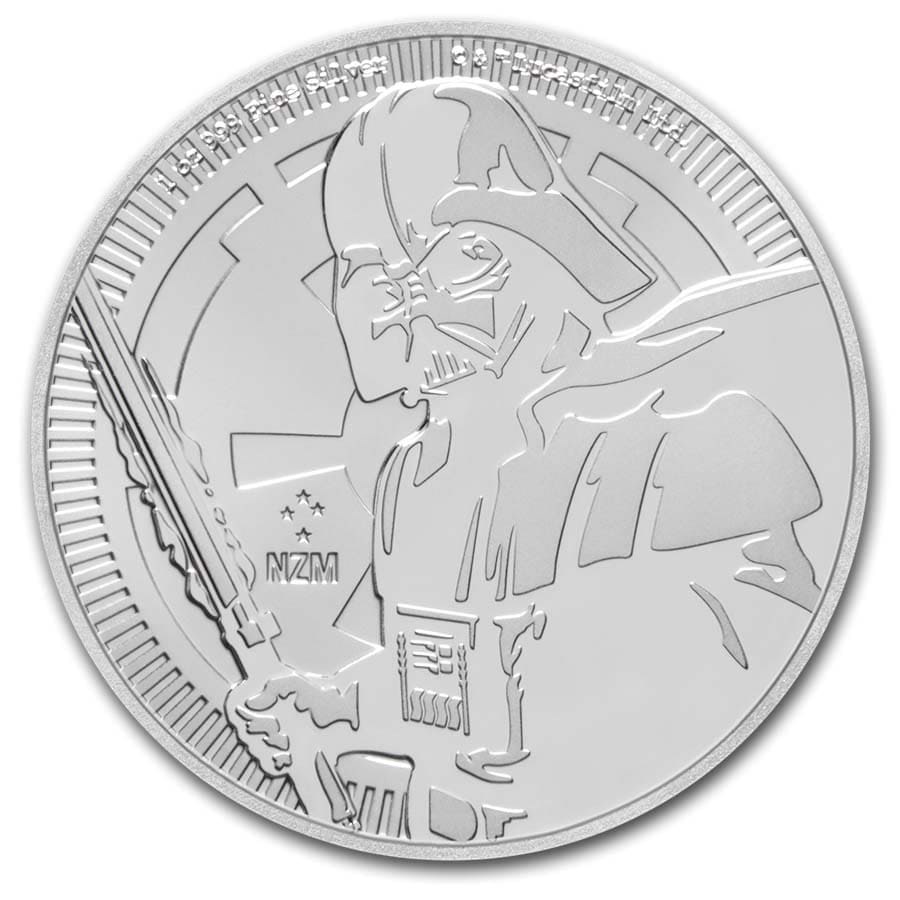 Your purchase is guaranteed to match the quality of the product shown. It will not be this exact item.
Product Details
Product Details
The fifth release in the STAR WARS bullion series by the New Zealand Mint features Darth Vader, wielding his lightsaber. The 1 oz coin is commemorated in .999 fine Silver.

The obverse displays the likeness of Her Majesty Queen Elizabeth II, along with the year and face value. The reverse features an officially licensed, close-up image of the iconic Darth Vader with his lightsaber, which has a raised and polished finish. This is set against a matte background featuring the Imperial logo. The reverse also features the metal content, quality, stamp of the Lucasfilm copyright, and New Zealand Mint logo for further authentication.

Darth Vader is one of the most well known fictional characters from the series, Star Wars, and one of the most iconic villains of all time. Initially a Jedi, Anakin Skywalker is lured to the dark side of the Force and eventually becomes the leader of the Galactic Empire alongside Emperor Palpatine. His fall is brought on during a battle with his son Luke, and former master. Darth Vader’s lightsaber was built after he lost his previous saber during a battle. His new lightsaber was used against the Jedi, along with other opponents. It was also used to destroy Obi-Wan Kenobi and cut off the hand of Luke Skywalker. The lightsaber was destroyed after the final battle, falling into the reactor shaft well.

Beloved by millions of fans around the world, Star Wars is a popular culture staple created by George Lucas. Beginning with the 1977 film, Episode IV: A New Hope, the franchise quickly became a worldwide pop-culture phenomenon. The franchise has produced multiple fan-favorite films, adored characters, and popular Disney+ spin-offs.

The New Zealand Mint is a privately owned company in Auckland, New Zealand. It is the only privately owned mint in New Zealand. They have established their reputation over the past four decades for their high-quality design, as exhibited by their innovative commemorative Gold and Silver bullion products. The only precious metal mint in New Zealand, the mint uses the tag-line “Minters of the South Pacific.” It produces collector and bullion coins for several pacific nations, including Fiji, the Cook Islands, Niue and Tuvalu.

Good deal, I will be buying these again.

Just started collecting. Just buy what catches my eye. Thanks

A very nice coin with a beautiful design and I can't believe this is the lowest priced coin out of the bunch!