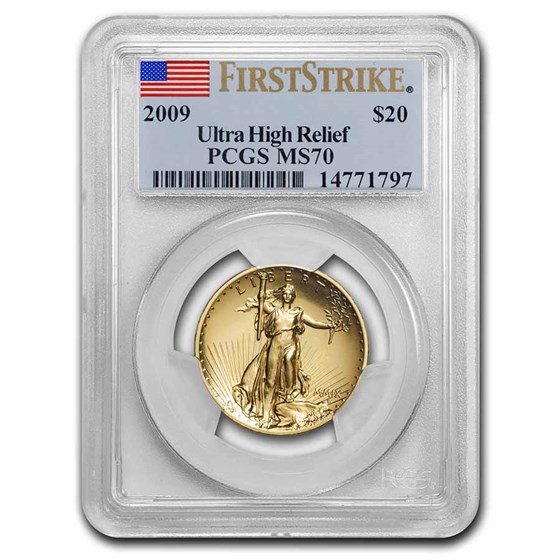 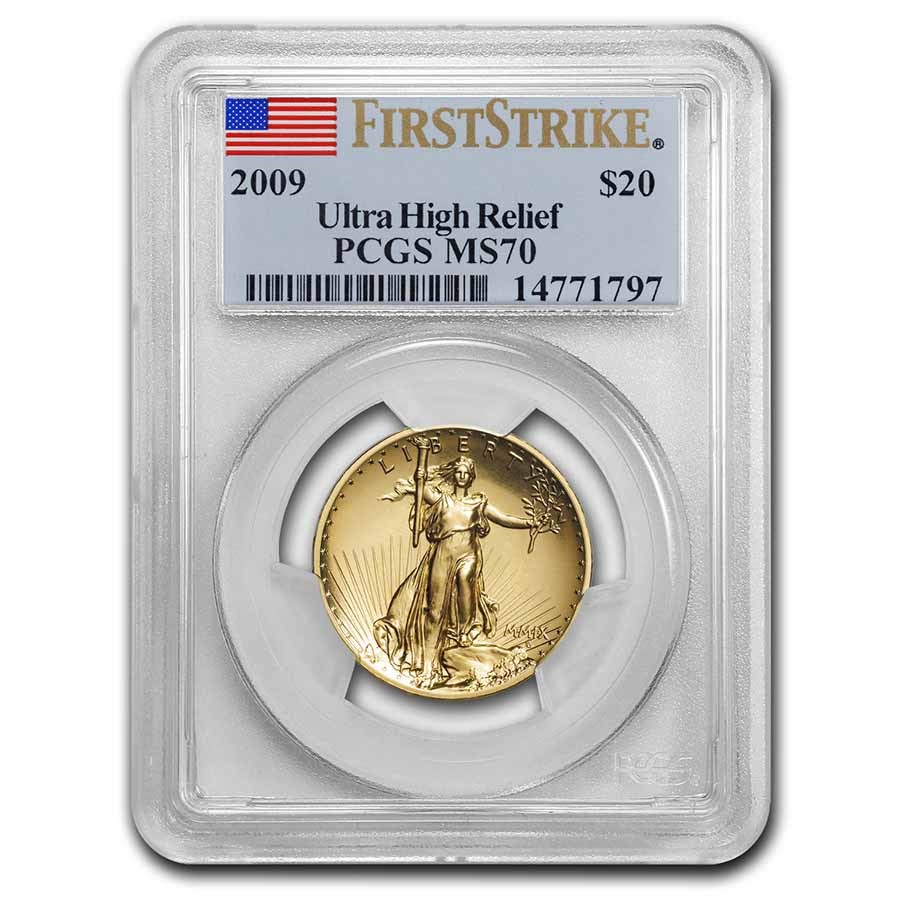 Product Details
Product Details
This coin is a masterful recreation of designer Augustus Saint-Gaudens original rendition of his $20 Gold Double Eagle (same diameter and double thickness of a $10 coin). The thick planchet allowed the design to be struck in much higher relief.

PCGS, one of the top two coin grading services, has guaranteed the Perfect Mint State-70 condition of this coin, adding collectability to the beloved design. Enhance your collection by adding this 2009 Ultra High Relief Double Eagle to your cart today!

History
The original design itself was first shown to President Theodore Roosevelt in December 1906. At the time, Roosevelt ordered the mint to produce experimental examples exactly following the artist’s models. Mint engraver Charles Barber took his job seriously, and although he and Saint-Gaudens despised one another personally, Barber had considerable respect for the sculptor’s artistic talent and reputation. To a remarkable extent, this was accomplished by Barber during the first week of January 1907, with considerable assistance from Henri Weil. The two not only prepared hubs for a normal 32-millimeter diameter Double Eagle, but another set for the 27-millimeter specimen, the size of the current $10 Gold Eagle.

Experimental pieces in both diameters were intended to determine how many blows it took to fully express Saint-Gaudens’ high relief design. Everyone, including Saint-Gaudens, knew that a coin with such high relief could not be struck with one blow from a normal press, but no one knew how many it would take. Barber hoped that the small-diameter pieces would allow more of the force from the press to concentrate and result in fully struck coins with fewer blows. During the second week of February, small-diameter pieces were struck, although we do not know how many blows it took. Each coin was 27 millimeters in diameter but contained the same Gold as a $20 coin. The result was a small, very thick coin with a decided “lump-like” feel. As was common, mint Director George Roberts took a couple of specimens of normal and small diameter experimental pieces back to Washington. He gave one pair to mint Auditor (and former Director) Robert Preston, and kept one pair for himself after showing the pieces to the president.

About a year later, new mint Director Frank Leach learned about the EHR experimental small-diameter pieces from mint collection curator T. Louis Comparette. The curator, who had no expertise in experimental coinage or law, convinced Leach that the small-diameter $20 pieces were illegal. This information led Leach to demand the return and destruction of all fifteen pieces. The last one to be returned was reluctantly surrendered by Charles Barber! (Barber had eight EHR Double Eagles in his personal collection when he died). With all 15 accounted for, Leach permitted two examples to be kept for the mint collection; the rest were melted.
Related Searches

This coin is breathtaking, appealingly unusual and collectible. I had 2 of these coins, but had to sell them. It was thrilling to be able to find a new one, especially one that was MS-70 rated! Trust me. There are no bad qualities regarding this coin. It is unique, beautiful and definitely a keeper! If I had the means, I would own a second one. Do yourself a favor and treat yourself to this beauty! You will not be disappointed.

The most beautiful coin I have ever seen

I wanted this coin because of its beauty. It is graded mint state 70. When I look at it I see the depiction of beauty , strength , and elegance . I just love this coin.