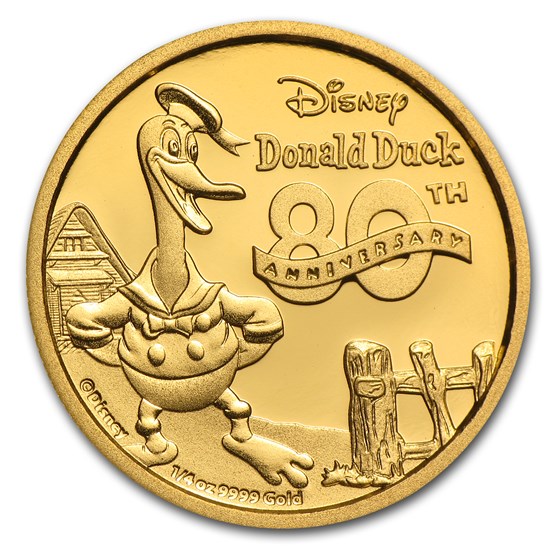 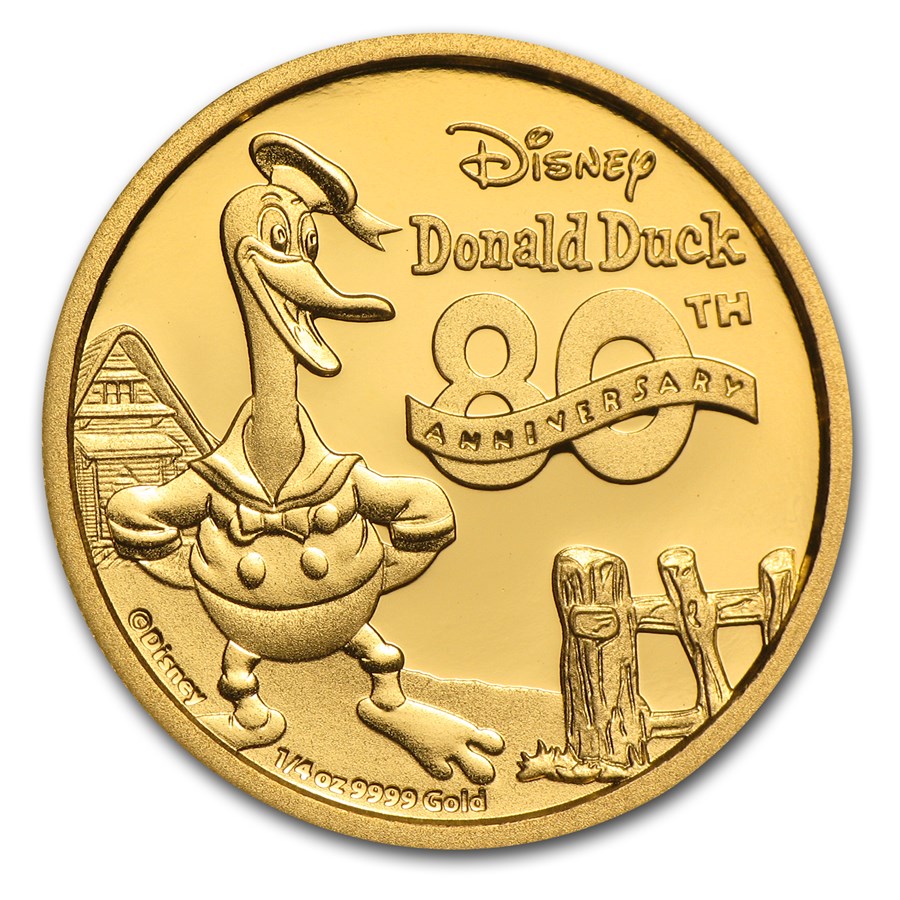 Product Details
Product Details
This .9999 Fine Gold coin features an original image of Donald Duck from his first film, "The Wise Little Hen" from 1934. No longer available from the mint, this coin is a must-have for the avid Disney collector!

Coin Highlights: This ideal gift for Donald Duck and Disney buffs has a limited mintage of only 1,000 coins. This highly anticipated Gold coin is a must have for any Disney enthusiast. Add this 2014 Niue Proof Gold 1/4 oz Donald Duck coin to your cart today!

The Story:
Disney has become one of the most collectible brands in the world as it has redefined the entertainment industry since its beginnings as a leader in American animation. From feature films to children’s toys and theme parks, the Disney logo stands as an iconic symbol of an entire era in entertainment.
The first installment of the two year series of Disney coins from the New Zealand Mint was the wildly popular Steamboat Willie Coin featuring the legendary Mickey Mouse character as he appeared in his first film. For the 2nd installment in the series that will feature the most iconic Disney personalities, this officially licensed Disney product commemorates one of Disney’s most internationally recognized and loved characters, Donald Fauntleroy Duck.

This coin marks the celebration of the 80th anniversary of Donald’s first appearance on television in a 1934 short film called "The Wise Little Hen". Famous for his semi-intelligible speech and his mischievous and irritable personality, he is the final member of the “Fab Five” of Disney, which also includes Mickey Mouse, Minnie Mouse, Goofy, and Pluto. Donald has appeared in a total of 178 films, more than any other Disney character, and was included in TV Guide’s list “50 greatest cartoon characters of all time”.

The Coin:
The reverse shows the original image of Donald Duck in his trademark sailor suit which he wore throughout his storied career. His image is set against a proof quality background with the house from the film engraved along the left side. Also included on the reverse is the Disney logo, “Donald Duck”, and “80th anniversary”.


New Zealand Mint:
The New Zealand Mint is a privately owned company in Auckland, New Zealand. It is the only privately owned mint in New Zealand, purchasing refined Gold from international sources to produce coins. They have established their reputation over the past four decades for their high quality design as exhibited by their innovative commemorative Gold and Silver bullion products. The only precious metal mint in New Zealand, the mint uses the tag-line “Minters of the South Pacific” and produces collector and bullion coins for a number of pacific nations, including Fiji, the Cook Islands, Niue and Tuvalu.