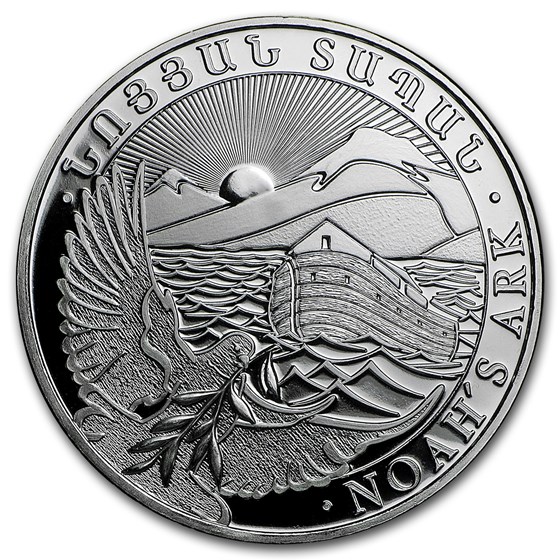 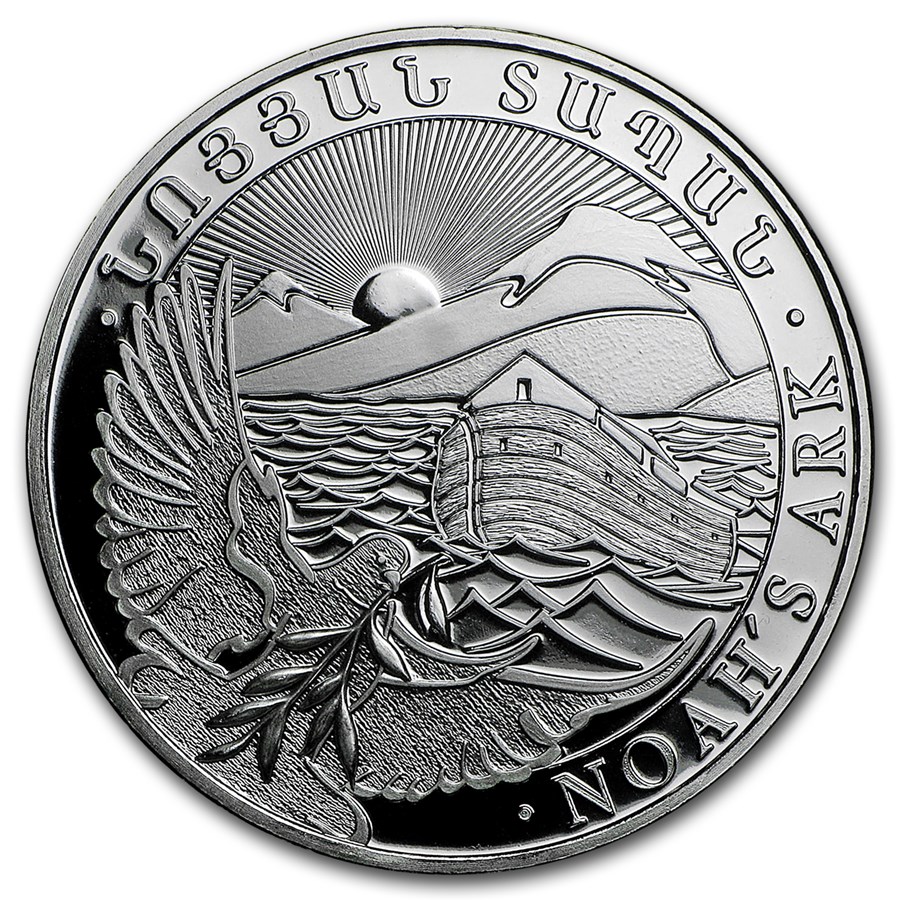 Coin Highlights:
Add the perfect presentation box to your order.

The Armenian Noah's Ark Silver coin series honors one of the most iconic stores of the Bible. Add this 2018 Armenia 1 oz Silver 500 Drams Noah's Ark coin to your cart today!

Armenia is a unitary, multi-party, democratic nation-state with a rich and ancient cultural heritage. Urartu was established in 860 BC, but by the 6th century BC it was replaced by the Satrapy of Armenia. The Kingdom of Armenia reached its height during the 1st century BC, under the leadership of Tigranes the Great. Armenia became the first state in the world to adopt Christianity as its official religion, sometime in the late 3rd and early 4th centuries AD.

The Ottoman, Iranian and Russian Empires squabbled over Armenia for centuries. This has serious practical negatives for Armenian people, but it did create a cultural tapestry of food, customs and traditions that give Armenian people great pride.

The contemporary Republic of Armenia gained its independence in 1991during the dissolution of the Soviet Union. The Republic of Armenia recognizes the Armenian Apostolic Church, the world's oldest national church, as the country's primary religion. The Armenian alphabet is a unique creation of Mesrop Mashtots in 405 AD. Armenia is a member of the Eurasian Economic Union and the Council of Europe.

Buy 2018 Armenia 1 oz Silver 500 Drams Noah’s Ark the moment they become available by taking advantage of APMEX’s handy AlertMe! button. If you wish to buy something APMEX doesn’t have on hand at the moment, simply click the blue AlertMe! button next to any out of stock item. Once you provide contact information, we can let you know as soon as your desired item is back in our vaults and waiting for you. When collecting Armenian Noah’s Ark coins and other Precious Metal items, it helps to know how to use the AlertMe! Using the APMEX Alert Me! Feature keeps you efficient and informed.
See More +

A Biblical Narrative on a Coin

The Armenian Noah's Ark Silver coin series celebrates one of the most important stories from the Christian Bible, the Great Flood. Narrated in Genesis 6:1-9:17, the story of Noah's ark is one of faith, perseverance and promise. God was disappointed in all of mankind, for he saw wickedness and evil in everyone’s hearts. That is, except for Noah. Noah had earned God’s great favor due to his righteous life and great faith. God prepared to bring the Great Flood to the earth, and destroy everyone but Noah and his family. God compelled Noah to build an ark, a special kind of giant boat, and load it with a breeding pair of every kind of animal. Noah’s righteous family and the animals would begin again and populate the world afresh, eliminating the scourge of wickedness.

When it started raining, Noah brought his wife and family onto the ark to endure a 40-day deluge of rain. The arc then drifted on the high flooding for another 150 days, before coming to rest on a Mt. Ararat. Noah sent out a dove to survey their surroundings, but it returned. Seven days later he sent out another dove and it returned with an olive leaf, showing that it had found dry land. Then, God sent the rainbow as a symbol of his promise to never destroy earth by flood again.

Historically, a large portion of Mt. Ararat belonged to Armenia, as the border between Armenia and Turkey ran over the top of the mountain. Following World War I, Armenia was divided between the Soviet Union and Turkey and Mt. Ararat became part of Turkey. However, Mt. Ararat remains an integral part of the national identity of Armenia. The symbol for “mountain” is still featured in the Coat of arms of Armenia in honor of Mt. Ararat’s role in Armenia’s history.

The 2018 Armenia 1 oz Silver 500 Drams Noah’s Ark is a rare work of religious art that is accessible to anyone at a modest price point. This lovely Biblical-themed coin would make a beautiful addition to anyone’s collection of coins, or anyone’s collection of Bible collectibles. Armenian Noah’s Ark coins would also make a poignant gift to any devout person, as a reminder of God’s promise and goodness. Shop our beautiful 2018 Armenia 1 oz Silver 500 Drams Noah’s Ark coins today.

The pictures on the website do not do this justice. Simply put, one of the most gorgeous coins I've ever seen.

Enjoy adding the Noah's Ark to the stack.

Bought 500, which was a bit lucky cause I have seen that stocks don’t sit around long and the monster box of the Noah’s ark coins is also a rare opportunity. Best part was the 500 came in a box that was sealed direct from the mint, which really made my day. Great design

just got this coin and it perfect in every way

These are highly-detailed and semi-proof quality. Possibly the best-looking coin you can get at this price.