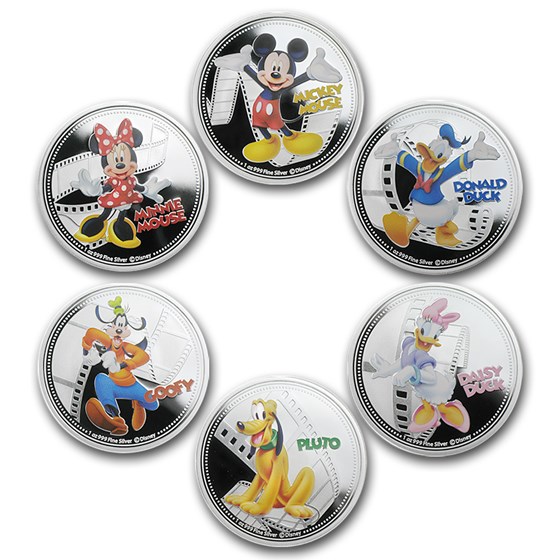 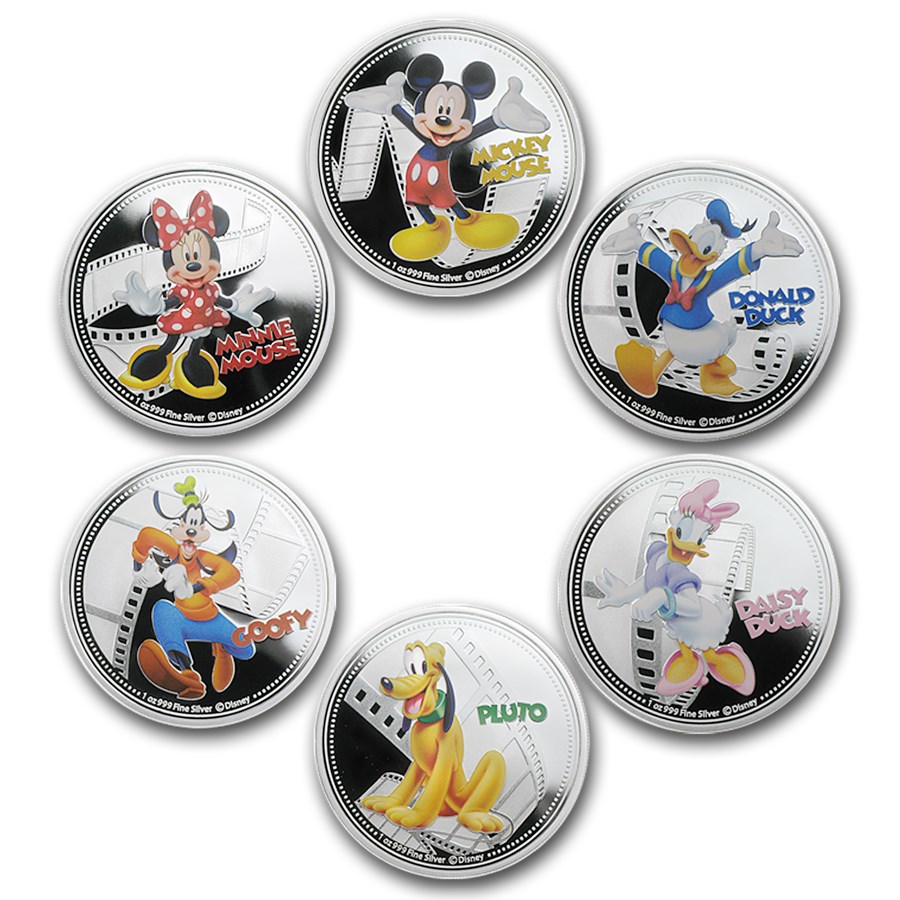 Your purchase will match the quality of the product shown.
Product Details
Product Details
Sold out at the mint! As a part of the New Zealand Mint's Disney Coins series, this is a must-have for any Disney enthusiast!

The set of six .999 Fine Silver Colorized coins features a modern image of iconic Disney characters, including each member of the "Fantastic Five." The set includes a colorized Silver coin of Mickey Mouse, Minnie Mouse, Donald Duck, Daisy Duck, Goofy, and Pluto. Each Disney coin has a Limited Mintage of 10,000 globally. This is part of the third release of coins in a two year Disney series that the New Zealand Mint is producing featuring the most popular Disney personalities. Previous in the series was the Donald Duck 80th anniversary Coin.

The Stories:
Mickey Mouse is one of the most famous cartoon characters in the world. Going on to appear in over 120 cartoons, Mickey became the first animated character to have a star on the Hollywood Walk of Fame. His endearing personality has captured the imagination of cultures and generations around the world.

Minnie Mouse is the stylish, lifelong sweetheart of Mickey Mouse. Wearing her iconic red polka dot dress, Minnie’s personality has delighted generations of fans across all cultures. With a history spanning over 85 years, Minnie shines as a star in her own right.

Donald Fauntleroy Duck is the most prolific of all the Disney characters in terms of his number of appearances, total screen time, and comic book career. An anthropomorphic white duck, Donald wears a sailor suit with a bow tie, and is known for his short temper. In 2004, Donald was recognized with a star on the Hollywood Walk of Fame.

Daisy Duck, like Donald Duck, Daisy is an anthropomorphic white duck; however, she is more feminine with long eyelashes and ruffled tail feathers. She is often seen wearing a blouse with puffed short sleeves, a matching hair bow, and heeled shoes. She also shows a strong affinity towards Donald Duck and is very devoted to him.

Goofy is a tall, anthropomorphic dog and typically wears a turtle neck, waistcoat, white gloves, and a tall hat originally designed as a rumpled fedora. A close friend of Mickey Mouse, Goofy is one of Disney’s most popular characters. Characterized as being extremely clumsy, he at times shows surprising intuition and knowledge, albeit in his own unique and eccentric way. Having featured in television shows and comic books, Goofy was given his own series of shorts during the 1940’s, two of which were nominated for ACADEMY AWARDS ®.

Pluto is an iconic cartoon character whose nature and personality as a tracker dog in this early film was quite different to the friendly pup we know today. His cheerful and adventurous temperament has endeared him to many. As he does not speak, Pluto’s performance relies on physical humor. This has made him a pioneering figure in character animation, by expressing personality through movement, facial expressions and vocalization. Cast in his own television series in 1937, Pluto went on to appear in 48 cartoons over the following decades.

These Disney coins are absolutely gorgeous and make a great display. The fairly low mintage will raise their value over time, because Disney characters are timeless and each generation we have millions more.

These are very nice Disney coins and hard to find. APMEX had them and no delays in shipping once I ordered.

After extensive shopping around, bought this set because of price and even though not guaranteed, they all came with like limited edition numbers. Fantastic. I am very impressed with the company and the fact that they work with the small investor.

product was bought to retain a history of the past and without a doubt, the value of such a set will always increase. I have seen other sets, but they did not have the visual quality that this set has.

I am very pleased with the product. Excellent packaging and presentation. See video: https://www.youtube.com/watch?v=a2PyhCqO43k