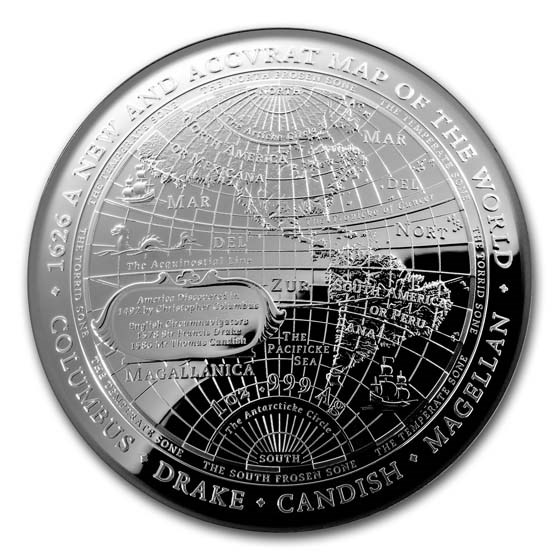 Product Details
Product Details
The second and final release of the two-coin Proof Silver Terrestrial Dome series by the Royal Australian Mint is concluded with a 1626 map of the Western Hemisphere, illustrating a work of art from the Age of Discovery.

The 15th and 16th century explorations by famous explorers during this era paved the way for the world as it is today. The new found lands during this Age of Discovery are commemorated in beautiful detail on this Proof Silver domed coin, based on historic and rare maps of the period.

Coin Highlights:
This coin is the second in the two-coin Terrestrial Dome Silver coin series and features the Western Hemisphere. This limited mintage Silver domed coin with its unparalleled intricate detailing is uniquely suited for history buffs, gift-givers and investment enthusiasts alike. Add the 2019 1 oz Silver $5 Map of the World Western Hemisphere Domed coin to your cart today!

Shop all Royal Australian Mint Silver Domed coins, including the first coin in the series, a graded PR-70 Map of the World coin.

The earliest known maps date back to the 6th and 5th century B.C., assuming the flat Earth concept. World maps assuming a spherical Earth later appeared during the Hellenistic period. During the Age of Exploration, maps became increasingly accurate as explorers began to explore and discover new lands. Maps have been, and continue to be necessary tools to navigate the world and stir imagination for further exploration.

I like the detail and curvature... I would have preferred it as a 10oz coin

I love the map coins and having a proof and sovereign coin backed by a stable gov't. is a great value. This coin was also a great Mother's Day gift, which I gave to my mother because I got her interested in collecting bullion coins. It came packaged very well and inside a bag, which held the coin inside a display box. My mother was very pleased with the gift. I also ordered this coin for myself. I want to thank APMEX for including a nice note to my mother from my family.