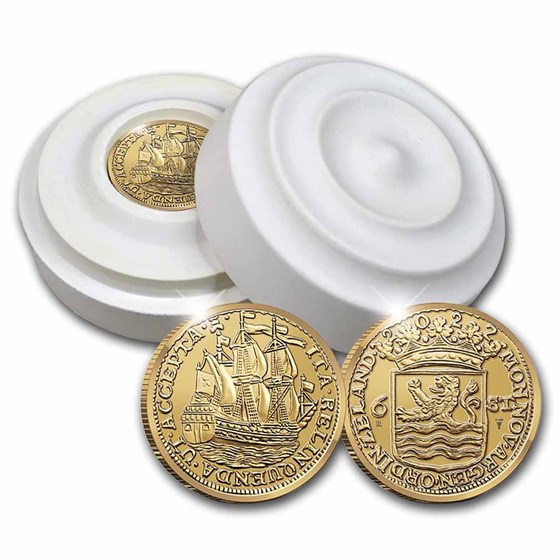 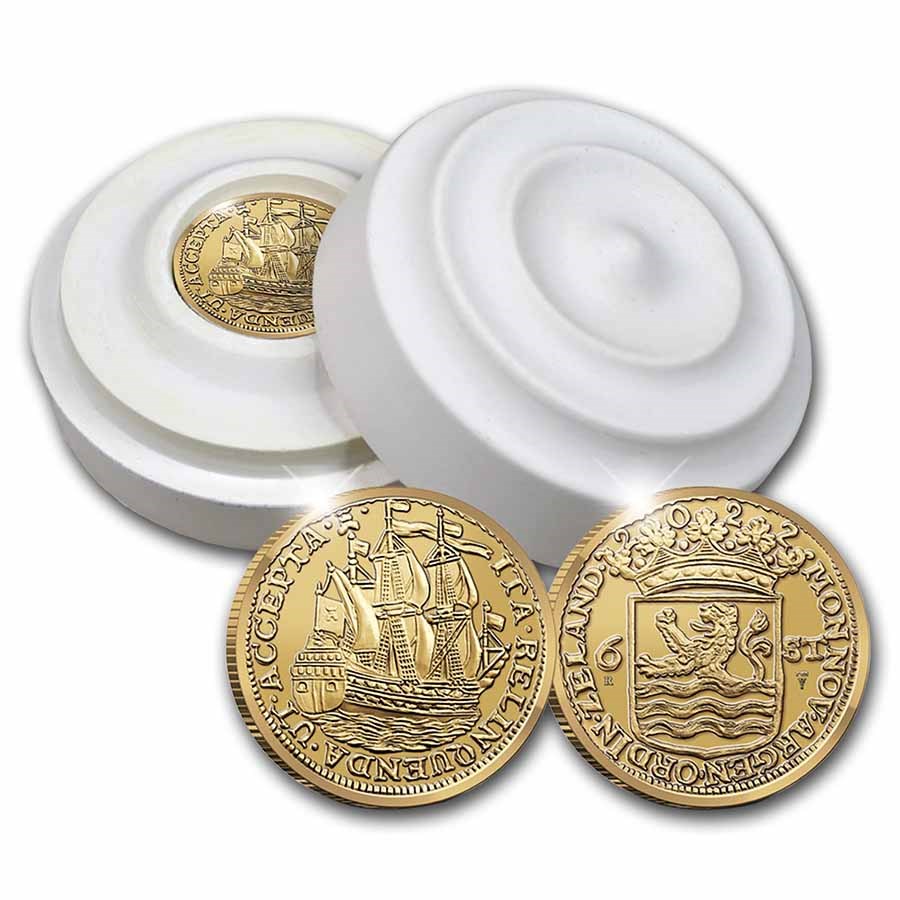 Your purchase will match the quality of the product shown.
Product Details
Product Details
The Royal Dutch Mint is proud to present the official restrike of the original Utrecht “Scheepjes- Schelling,” or “Ship Shilling,” from 1761 in a low mintage of 10 coins. With such an extremely low mintage, this Gold Proof is perfect for any collection.

Protect your 2022 Gold Piedfort Proof Ship Shilling, and other collections, by adding a home safe to your order.

Bring a unique and limited mintage coin to your collection today by adding this 2022 Netherlands Gold Piedfort Proof Ship Shilling with Ceramic Case to your cart today!

2022 Gold Piedfort Proof Ship Shilling from The Royal Dutch Mint
The “Schelling” is a Dutch coin type which has been around in many varieties since 1670. The Ship Shilling was brought into circulation because many lesser pieces were in circulation featuring previous varieties of the coin. The name of the Scheepjes-Schelling is derived from its use in trades, mostly internationally. The coin had a nominal value of six stuivers, or 5 cent coins, and was minted by the Royal Dutch Mint. The Royal Dutch Mint is a company owned entirely by the Dutch State, and since 1807, the only Dutch entity that is allowed to strike and issue coins.

In 1806, when The Netherlands was under the reign of King Louis Napoleon, he decided that coins should be issued by a single national body. This contrasted with traditional Middle Ages practices, where large trading cities had their own mint and circulated several different types within a country, resulting in multiple levels regulating the trade's production and distribution systems.

Originally it was King Napoleon’s intention to found the mint in the country’s capital city of Amsterdam, but since there was not enough money available there, it was later decided to locate the national mint seat in Utrecht.

After Napoleon was defeated in 1813, William I, as king, founded the Kingdom of The Netherlands and the mint was renamed to Rijks Munt. What is now known as Belgium was a part of the new kingdom, and a second mint was in Brussels until Belgium achieved independence in 1839. Once Belgium achieved their independence, the Rijks Munt once again became the only mint in the Kingdom of The Netherlands. The local coins that had been minted before the integration of the mint were still in circulation. Due to their comparatively high inherent value, the "new" coins would only gain popularity over time. In 1849, the coins were officially taken out of circulation.

In 1901, the company was placed under the guidance of the Ministry of Finance, until the mint officially became a company owned by the state in 1912. In 1944, at the end of the German occupation during the Second World War, coins were produced in the United States for a short period of time. This assistance was necessary to make certain there would be enough currency available for the public after their liberation. In 1994, the Rijks Munt was renamed as De Nederlandse Munt NV. Once it officially became a company, 100% of the shares became owned by the Dutch State. The queen awarded the company the prefix Koninklijk (Royal) five years later, and the company was now allowed to call itself De Koninklijke Nederlandse Munt (The Royal Dutch Mint).