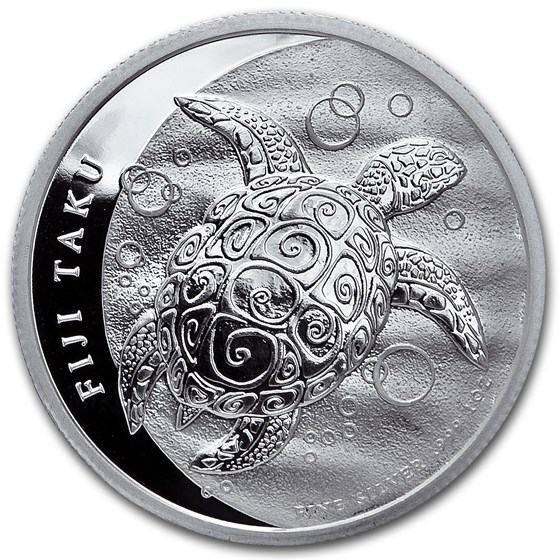 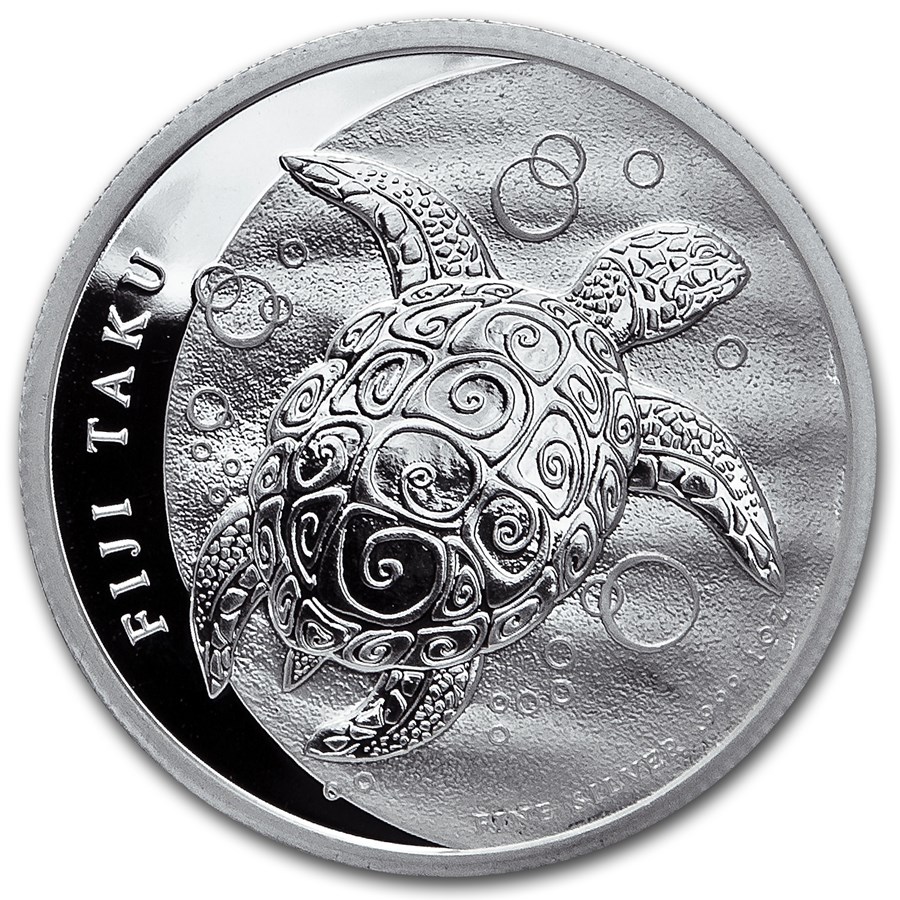 Your purchase is guaranteed to match the quality of the product shown. It will not be this exact item.
Product Details
Product Details
Nearly 3,000 critically endangered Hawksbill turtles, or takus, call Fiji their home, and they have been honored on this beautiful series. Each of these .999 fine Silver coins celebrates the beloved taku and would make a great addition to any collection.

The Fiji Taku is a coin that is admired around the world. Add this Brilliant Uncirculated 2013 Fiji 1 oz Silver $2 Taku to your cart today!

It was so difficult to find a turtle without the face of the colonizer named Elizabeth on one of the sides of the coin. THIS IS A WINNER. Electrifying design yo.

I love the Niue Taku, I wanted to have the 2013, the last year Fiji was on the coins. Small scratch when it arrived, near the turtle... I don't usually have issues with APMEX coins, but this scratch makes it less attractive.

Merchant response: Thank you for your feedback. We apologize for the condition in which this item was received. Our Returns team will be in contact with you in 1-2 business days.

Neither fish nor fowl, but got what I ordered

+ + Attractive design - Nice mirror finish. And I like the background very mat finish. But the very shiny turtle I am less impressed with. However, I was expecting a deeper cut design. Mexican Libertads look more serious. I do however like turtles, which is why I bought this coin, nothing to do with value. Coat of arms looks more attractive and detailed than in photo. I am glad I ordered just one, as a novelty and a test really, because in person it doesn't impress me. + Enclosure - I like having the APMEX brand on the folder. - The obverse exterior edge circle I find a wee bit larger than it needs to be. ++ Ag content marked, albeit very small letters ++++ Availability - This coin is hard to find. Competitors did not have it or charged more. None of my local Fijian grocery stores in Vancouver had it. - Mintage - unpublished. I have enquired from 'New Zealand Mint' what it is and whether it is an open mintage (such as some art bars, the molds for which were sold and production continued long after the dates) ++ 'Nation' - Fiji (Melanesians and Indians) appeals to me more than Vanuatu (offshore banking haven) - - Round - Is this a real coin or a round? It is produced by a private mint in New Zealand yet it is marked 'two dollars'. When I contacted the mint asking for clarification, "Does New Zealand Mint have any affiliation with the government/money supply/Central Bank?", they replied straighforwardly, 'No'. More honest than Federal Reserve!

I bought this coin because of its design and workmanship. I especially like the contrasting finishes between the dull/matte and the highly mirrored. Quite an attractive coin.

This round is very well designed. Great artwork and clean, crisp lines leave absolutely nothing to dislike about the 2013 Taku. Buy yours and see for yourself.

The best of the Fiji taku coins

I love these coins. They are absolutely beautiful...mine came in mint condition...I also purchased the 1/2 oz. which was also mint condition. Thanks APMEX.

I am a novice collector who purchases random pieces that I enjoy looking at and having in my collection. You really can't go wrong with this Fiji Taku. It's such a great design with the detailed sea turtle and is just stunning to look at and hold in your hand. Also..I'm sure it will increase in value over time.

Amazing design, it's just beautiful and everyone should get at least one of these.

Good Addition to Your Collection

Besides buying generic or high mintage bullion, I enjoy collecting unusual or pretty coins from around the world. This and the New Zealand silver ferns are unique coins.