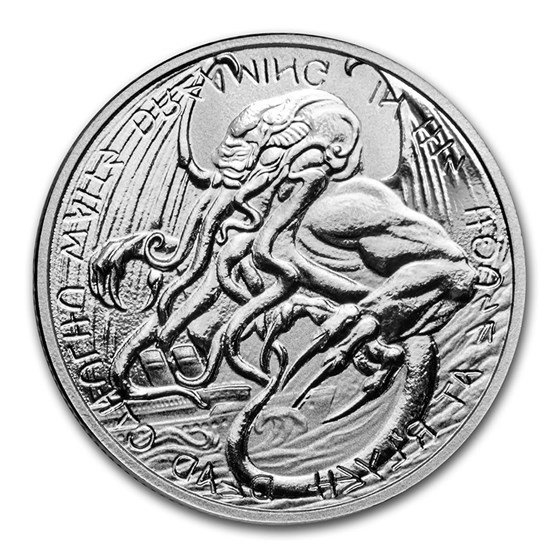 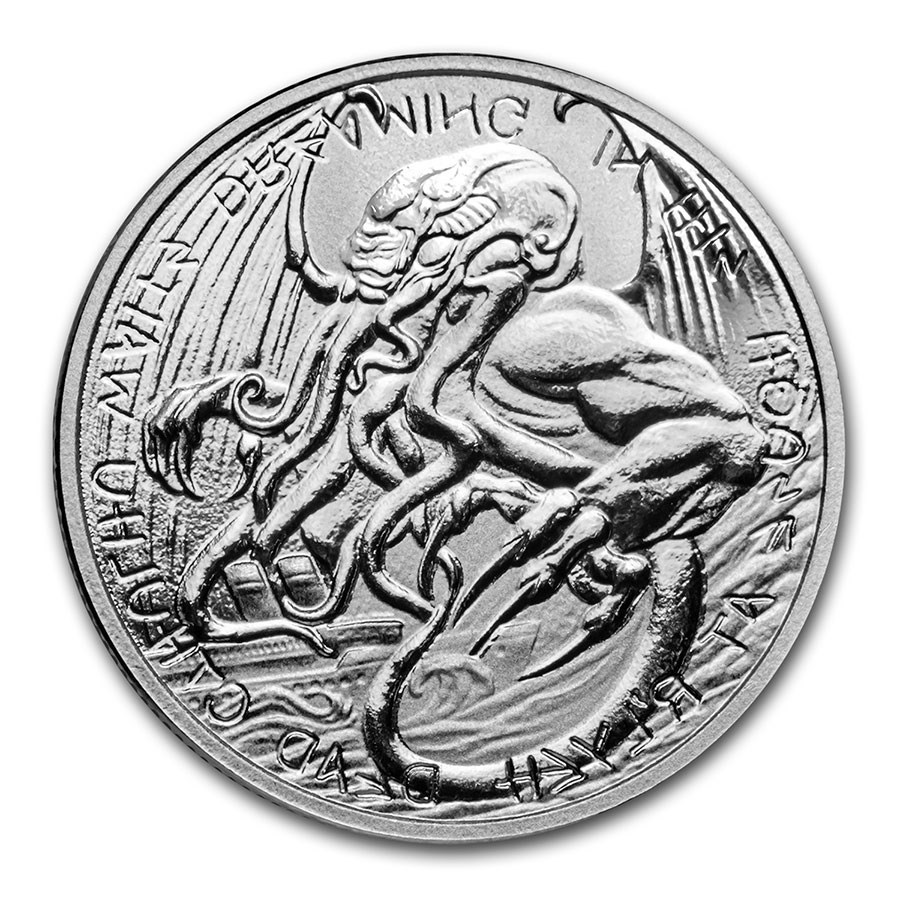 Product Details
Product Details
Celebrate cosmic horror with this APMEXclusive Silver coin commemorating HP Lovecraft's Cthulhu. In addition to depicting the famous monster this coin indicates the location of the sunken city of R'lyeh in relation to the issuing island nation of Tokelau.

Coin collectors and HP Lovecraft fans alike will enjoy this unique coin for its devotion to Cthulhu lore. Add this 2021 1 oz Silver Cthulhu coin to your cart today!


Cthulhu and H.P. Lovecraft
The master of cosmic horror brought forth his most recognizable monster into public consciousness with the following words:
“A monster of vaguely anthropoid outline, but with an octopus-like head whose face was a mass of feelers, a scaly, rubbery-looking body, prodigious claws on hind and fore feet, and long, narrow wings behind”

Cthulhu was the high priest of the Great Old Ones who ruled the Earth before mankind even existed. Laying dormant in the sunken city of R'lyeh, Cthulhu sleeps and his dreams were said to influence early humans to form the cult of Cthulhu, which chants the words "Ph'nglui mglw'nafh Cthulhu R'lyeh wgah'nagl fhtagn" whose translation into English is revealed upon this rare coin when seen through a looking glass.

Very well-designed coin, beautiful strike and interesting subject matter. I read just about everything H.P. Lovecraft ever wrote many years ago and found it all chilling...

Mighty Cthulhu is our one and only god.

From the ocean he rises! this coin is a great gift for a Lovecraft fan or a person who loves the RPG.(Roll Playing Game) Call of Cthulhu. NO sanity roll needed to view this coin. would make an expensive prop for a game. So keep searching investigators. remember He who must not be named, (this predates VOLDOMORT) maybe next.

If you love HP Lovecraft

Love the coin. The design is very detailed and exquisite. Nuie Island has very beautiful coins with a few exceptions

I am quite pleased with this coin. I purchased it for the story. A legitimate currency with an odd literary reference.

Why choose the lesser evil?

This is an impressive coin, and shocking for its design! The elder gods would be slightly amused before they ate you.

Love the design of this coin!

Such beautiful detail. I Would definitely recommend if your a collector of silver/lovecraft pieces

I am a Fan of Howard ,and Lovecraft. I found the stamp deeply detailed, the coin is exquisite, My son had to have one himself as he is a fan of such things. Beautify minted and will be treasured by me this is a keeper piece for my personal collection.

One of the more unique design offerings