The First Platinum Coin from the U.S. Mint
The Platinum American Eagle is made with .9995 fine Platinum and is valued by collectors and investors alike. Released in 1997, these coins are the only investment-grade Platinum coin from the United States Mint. It is the only coin the United States government guarantees for weight, content and .9995 fineness. Since its introduction, the American Eagle Platinum has become one of the world’s most widely traded Platinum Bullion coins.

Designing the American Platinum Eagle Coins
A tribute to the patriotism and spirit of freedom of the United States, the designs of the Platinum Eagles give the coins an elegance that attracts collectors and investors alike. Displaying a portrait of the Statue of Liberty, the obverse celebrates this symbol of freedom and opportunity recognized by people all over the world. While the obverse has remained the same, the reverse of the proof is unique in that it changes each year. In fact, proof American Platinum Eagles are the only U.S. bullion coins that have a reverse with a yearly changing design. 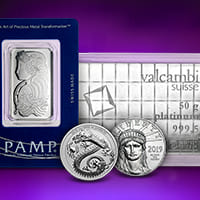