Celebrate the Greatest Icons of Inspiration in Gold & Silver

APMEX is proud to present the Icons of Inspiration series. This low mintage series will include both Gold and Silver coins designed by Renaissance Artist Joel Iskowitz. Each 1 oz release will feature a beautiful design depicting an iconic innovator.

The fifth release in this popular series showcases the famous Wright brothers: Orville and Wilbur Wright. These two are considered pioneers in American aviation because they invented, built, and flew the world's first successful motor-operated airplane in 1903. Additionally, the Wright brothers also invented aircraft controls that made fixed wing powered flight possible.

This release includes 10,000 Silver BU, 100 Proof Silver, 100 Gold BU coins that were designed by renowned artist Joel Iskowitz. To add even more collectible appeal, 10 of the Proof Silver and Gold BU coin certificates of authenticity are signed by Joel Iskowitz. The obverse features the brothers’ portraits in the foreground with the blueprints for their airplane in the background. Orville and Wilbur’s signatures are seen below their respective portraits. The reverse depicts a stunning muse with one hand reaching toward the sun and her other resting on the Niue nation’s seal with the year and denomination also included around the design. Add a Gold or Silver Wright brothers coin to your collection today! 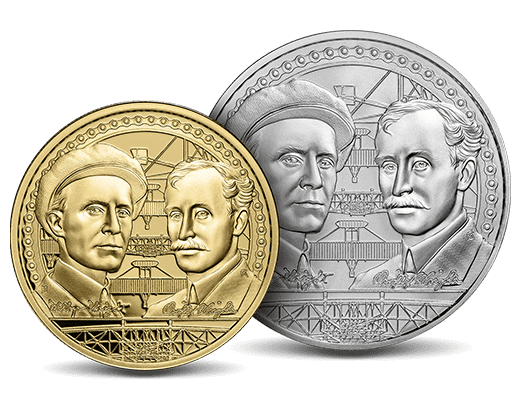 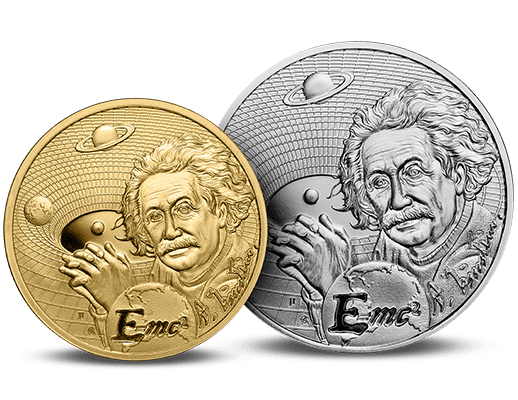 The fourth installment of this Icons of Inspiration of series showcases Albert Einstein, who is revered as one of the most influential physicists of all time. He is most known for developing the theory of relativity, first predicting the existence of black holes, and making essential contributions to the development of the theory of quantum mechanics. Einstein’s work influenced the philosophy of science, and he received the Nobel Prize in Physics in 1921 for his contributions to the field of theoretical physics. The world-renowned scientist can be found on Silver and Gold coins that were designed by Joel Iskowitz. The year and denomination are also included.

The third release in this series features Sir Isaac Newton, an English astronomer, mathematician, physicist, and author known as one of the greatest physicists and influential scientists of all time. Newton remains an important figure in the philosophical revolution known as the Age of Enlightenment. 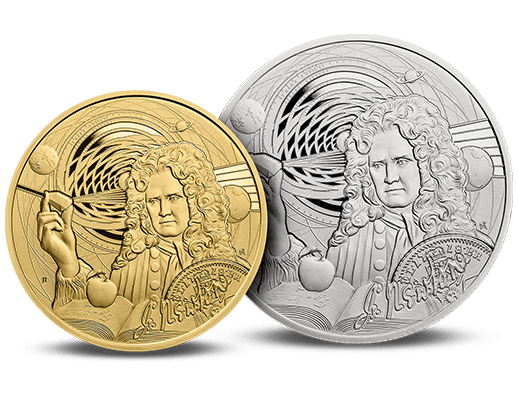 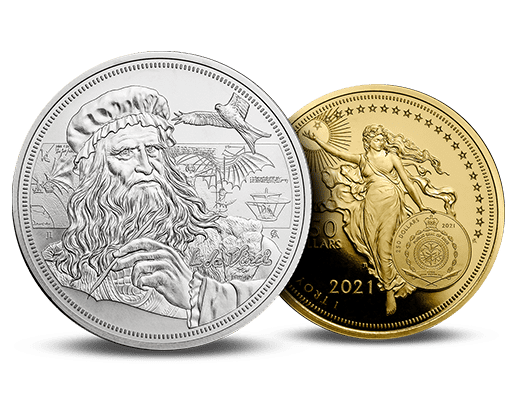 The second release in this series features Leonardo da Vinci, an Italian Renaissance man who was a master of various fields like painting, engineering, sculpting and architecture. While his most famous work is the Mona Lisa, he is also renowned for artwork like The Last Supper painting and the Vitruvian Man.

These da Vinci coins are BU Silver, with a limited mintage of 10,000, as well as Proof Silver and BU Gold with a mintage of 100 each.

The first release in this exciting series features the Italian philosopher, astronomer and mathematician, Galileo, and is already sold out. He made several revolutionary telescopic discoveries, including the four largest moons of Jupiter. These 1 oz coins have limited mintages of 100 Gold, 100 Proof Silver and 10,000 BU Silver.

Designed by Joel Iskowitz, the obverse depicts Galileo holding a refracting telescope, one of his most famous innovations, alongside a globe and the moon. A rendition of his signature is below. 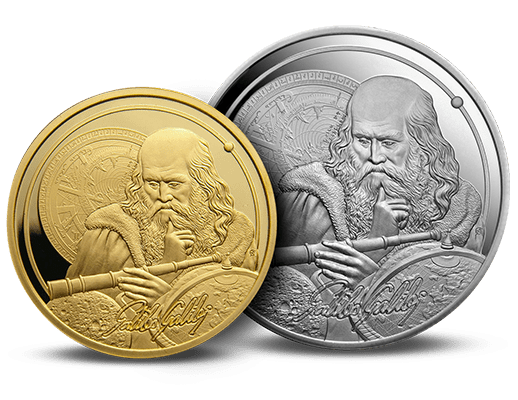 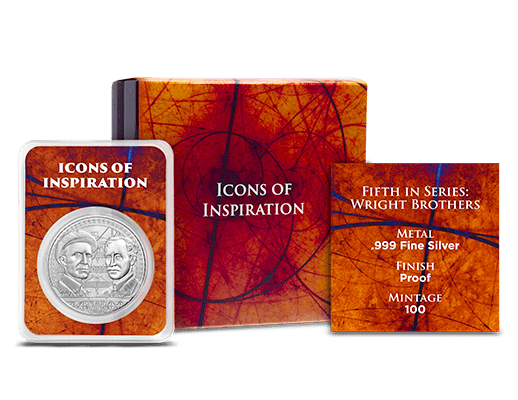 The BU Gold and Proof Silver coins come in an Icons of Inspiration presentation sleeve with a custom box inside. This custom packaging comes with a tamper evident packaging option that adds collectibility and visual appeal to this superb series. Very limited numbers are available with a hand-signed certificate of authenticity by the artist.

About the Designer: Joel Iskowitz

Born in the Bronx, New York, Joel Iskowitz is a prolific United States coin designer. His goal is to bring humanity's story to life through the paintings, coins, stamps and medals that he designs. Joel has said, "What is important is the connection between the story in the artwork and the real human history." Joel is a story-teller, a narrative artist, whose ideas are conveyed through the images he creates. 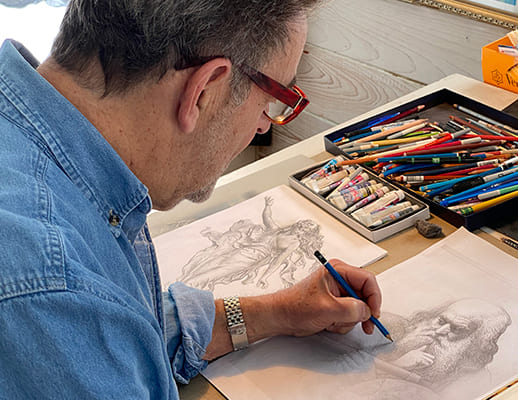