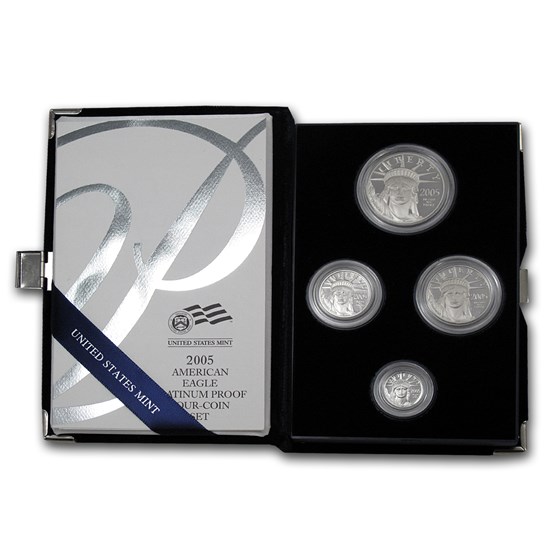 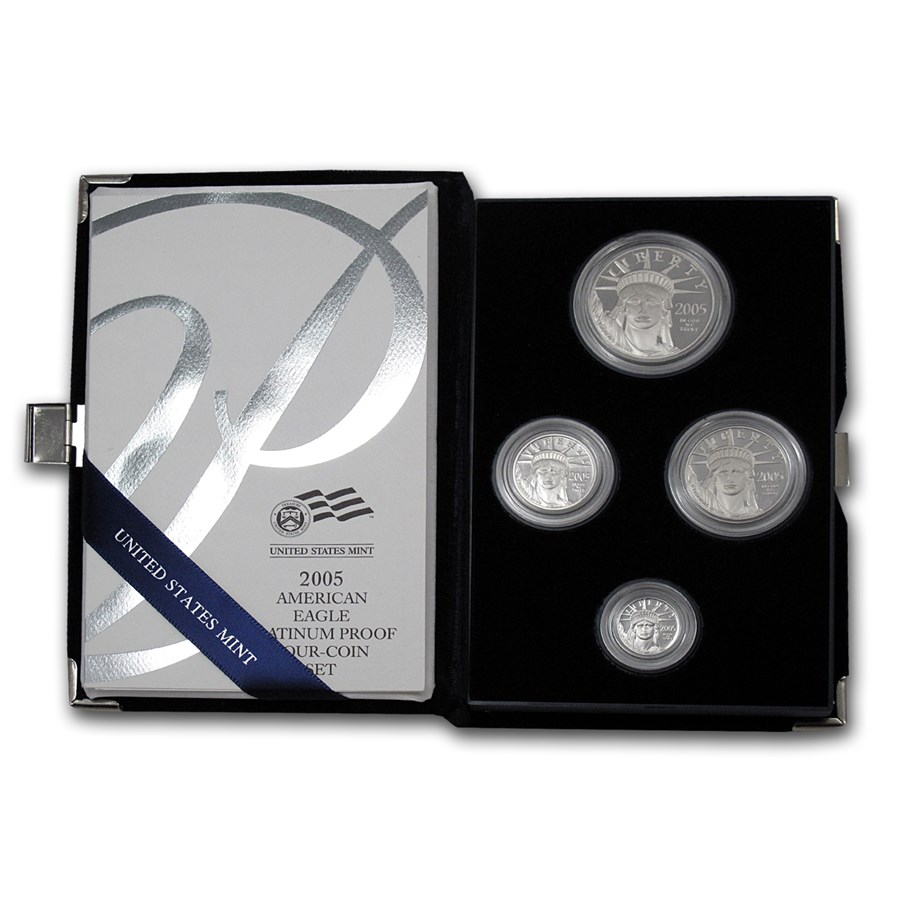 Your purchase is guaranteed to match the quality of the product shown. It will not be this exact item.
Product Details
Product Details
These Proof Platinum Eagles are collector versions of the U.S. Mint's beloved bullion coins. A yearly changing design, coupled with already limited mintages, adds collectible appeal to this Proof Platinum Eagle set.

Handle your investment with care by adding these cotton gloves to your order.

One of the most popular designs in American coinage, the Proof Platinum Eagle changes yearly, adding to its bullion appeal. Add this beautiful 2005-W 4-Coin Proof American Platinum Eagle set to your cart today!

Platinum American Eagles are run through a special die process to heighten their beauty.

Platinum American Eagles are offered as proof coins, which used to mean early samples of coins made for checking the dies and archiving, but now means coins struck specially for collectors. Proof Platinum coins are prepared with specially polished dies that produce sharper lines on the designs and smoother areas of the coin where the design is blank. Designs on proof U.S. coins have a frosted appearance on a mirrorlike background that makes the designs seem to float on the coin. Proof Platinum U.S. Mint coins bear the “W” mintmark, indicating they were produced at the United States Mint at West Point.

Platinum coins are made of an ancient metal that has gained modern appreciation.

Platinum American Eagles are made of a Precious Metal that has been around since at least 1200 B.C. when it was placed in Egyptian tombs. The same metal for Platinum coins, though, would not be recognized in Europe until the 1500s, when Platinum was considered an impurity in Gold. U.S. coins did not start using Platinum until 1997. U.S. Mint coins made of Platinum, an exceedingly rare metal with many industrial uses, can sell for more than Gold coins.

The history of Platinum American Eagles

American Eagles are the official Platinum bullion coins of the U.S. government. These Platinum coins were first released by the U.S. Mint in 1997 and Platinum Eagles were initially offered in 1/10 oz, 1/4 oz, 1/2 oz and 1 oz sizes. These proof U.S. coins are the only U.S. bullion coins that change design each year. These Platinum coins have also offered series such as “Vistas of Liberty” (1998 to 2002), “The Foundations of Democracy” (2006-2008) and a series starting in 2009 on the Preamble to the U.S. Constitution. U.S. Mint coins offer lessons in history in addition to carrying great investment value.

Why invest in American Eagles?

In 2005, Proof Platinum American Eagles came in four sizes with different mintages, but you can have the complete collection of proof coins in one attractive and display-worthy box. These proof Platinum coins created collector interest with their annually changing design, singular among U.S. coins. The smaller Platinum U.S. coins are identical to the Platinum 1 oz American Eagle except for the weight and face value, and the creation of fractional sizes ended in 2008. U.S. Mint coins are an excellent investment for the value of their Precious Metal content, but proof 2005 American Eagle sets have an added collectibility for their beauty and uniqueness.