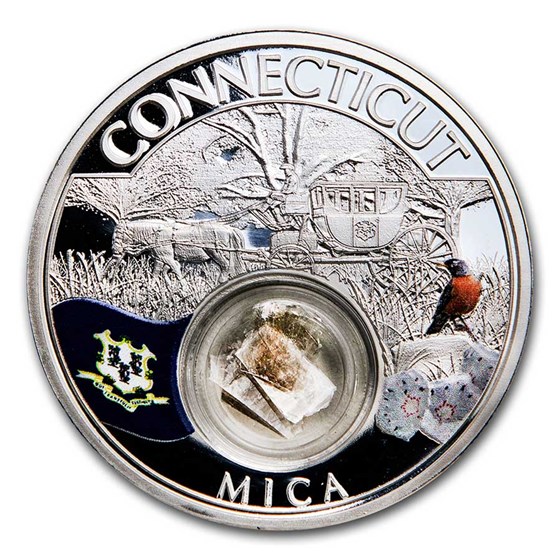 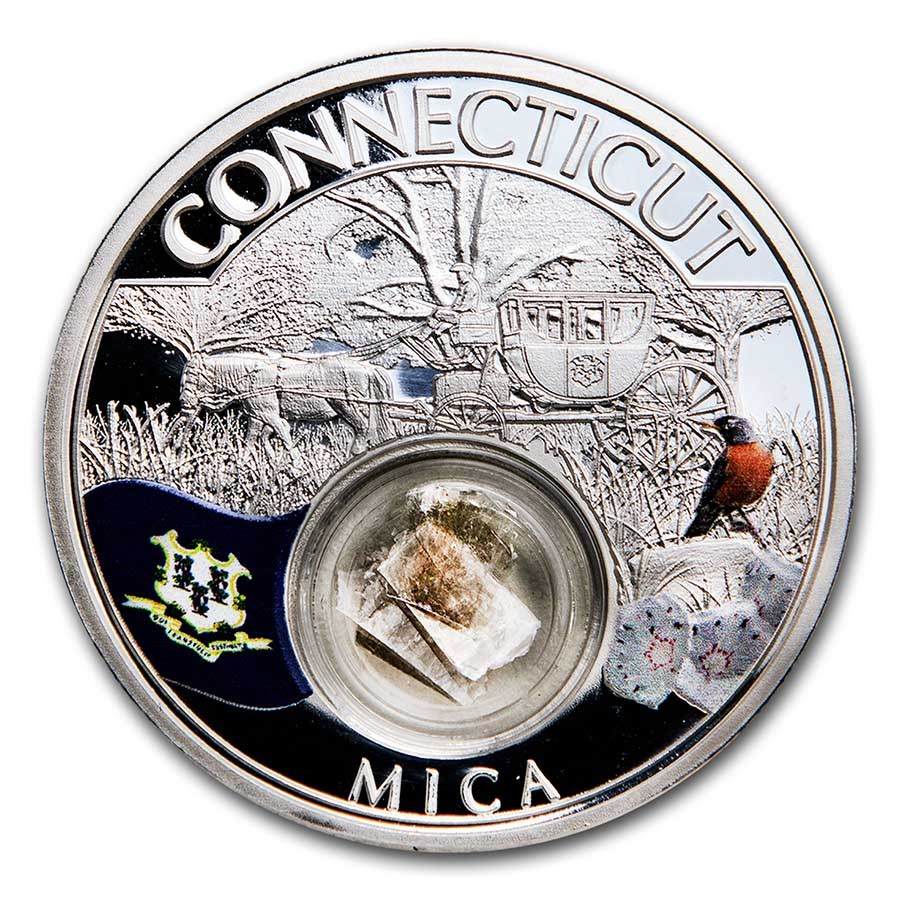 Your purchase will match the quality of the product shown.
Product Details
Product Details
Behold the Treasures of United States, now in vibrant color! This beautiful collection features all 50 states while each coin contains a native piece of state pride and features incredible designs to honor each state.

Collectors can marvel at the unparalleled detail, find hidden illustrations of state culture, and learn many interesting facts about the states and their discoveries. All of the items inside the coins are natural items, varying in value and scarcity but all are important elements for the state they represent. With a mintage of just 500, collectors can be sure about the rarity of this inspiring set as we walk through history around the nation and celebrate the 50 states like never before.

Collect them all! Add this 2021 1 oz Silver Treasures of the United States Connecticut Mica coin to your cart today!

Connecticut was an established name early in the 1600's in particular reference to the Connecticut River. The word itself was translated from the Indian name "Quinnehtukqut" and means "beside the long tidal river."

The Charter Oak became a symbol of the independence of the people of this state, when King James II revoked the Connecticut Charter in 1687. Preventing Royal Governor Sir Edmund Andros from getting his hands on it, Joseph Wadsworth stole the document and is said to have hidden it in the hollow of an oak tree on Samuel Wylly's property. The General Assembly designated Connecticut "The Constitution State" in 1959.

Mica is widely distributed and occurs in igneous, metamorphic and sedimentary regimes. Large crystals of mica used for various applications are typically mined from granitic pegmatite. Great deposits of sheet mica were mined in New England from the 19th century to the 1970s and mines existed predominantly in Connecticut. Thin transparent sheets of mica were used for peepholes in boilers, lanterns, stoves, and kerosene heaters because they were less likely to shatter than glass when exposed to extreme temperature gradients. Such peepholes were also used in "isinglass curtains" in horse-drawn carriages and early 20th-century cars.