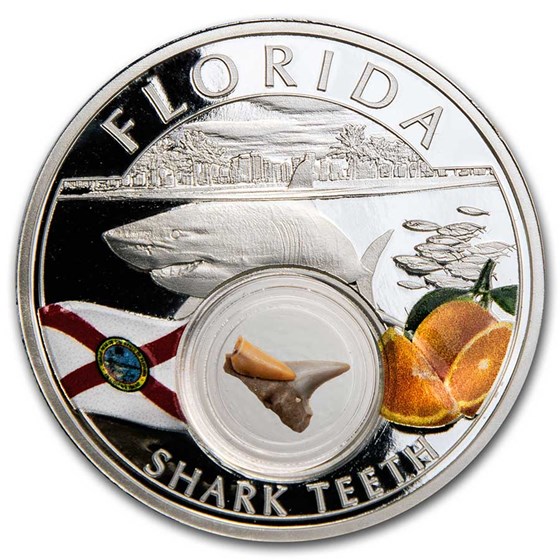 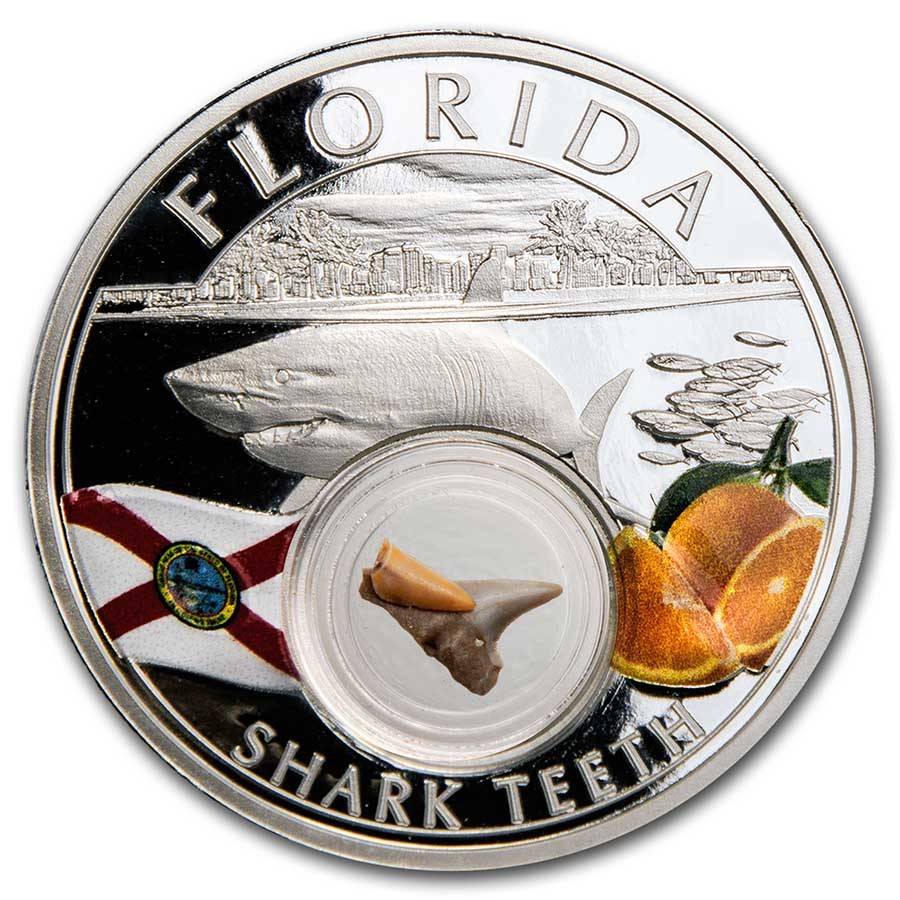 Your purchase will match the quality of the product shown.
Product Details
Product Details
Behold the Treasures of United States, now in vibrant color! This beautiful collection features all 50 states while each coin contains a native piece of state pride and features incredible designs to honor each state.

Collectors can marvel at the unparalleled detail, find hidden illustrations of state culture, and learn many interesting facts about the states and their discoveries. All of the items inside the coins are natural items, varying in value and scarcity but all are important elements for the state they represent. With a mintage of just 500, collectors can be sure about the rarity of this inspiring set as we walk through history around the nation and celebrate the 50 states like never before.

Collect them all! Add this 2021 1 oz Silver Treasures of the United States Florida Shark Teeth coin to your cart today!

Florida was named by Ponce de Leon in 1512. "La Florida," he called this land, Spanish for flowery or abounding in flowers. The Orange Blossom is the official state flower of Florida, while the Sabal Palm tree is the state's official tree.

Florida, over the years has become one of the world’s strongest tourist magnets, with sun soaked beaches and crystal springs. And with a little help from a mouse, Walt Disney World continues to lure more visitors than any other single attraction anywhere in the world.

If you want to go to the moon, you'll probably have to leave from Florida. John Glenn became the first American in orbit when he blasted off from Cape Canaveral in 1962. On July 20, 1969, only seven years later, Neil Armstrong became the first man to walk on the moon.

Venice, Florida is known as the Shark Tooth Capital of the World. Ten million years ago, when Florida was submerged under water, the area was teeming with sharks. Over time, as the water receded giving way to land, the prehistoric sharks died - their skeletons disintegrated, but their fossilized teeth remained. The Venice coastal area, just south of Sarasota, sits on top of a fossil layer that runs 18-35 feet deep. With storms and waves, the fossils are slowly driven into the shallow waters and then up onto the beach.