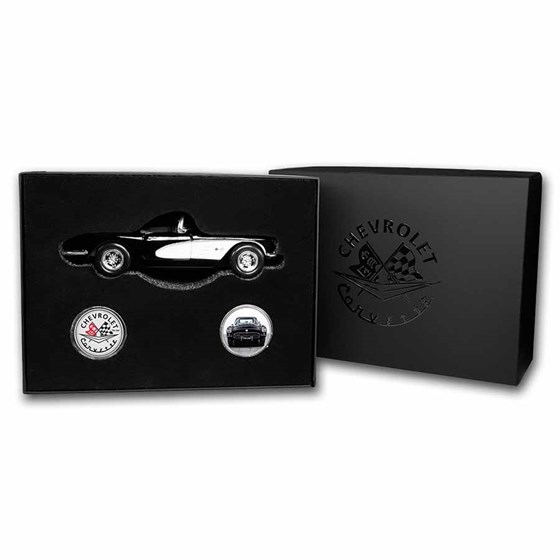 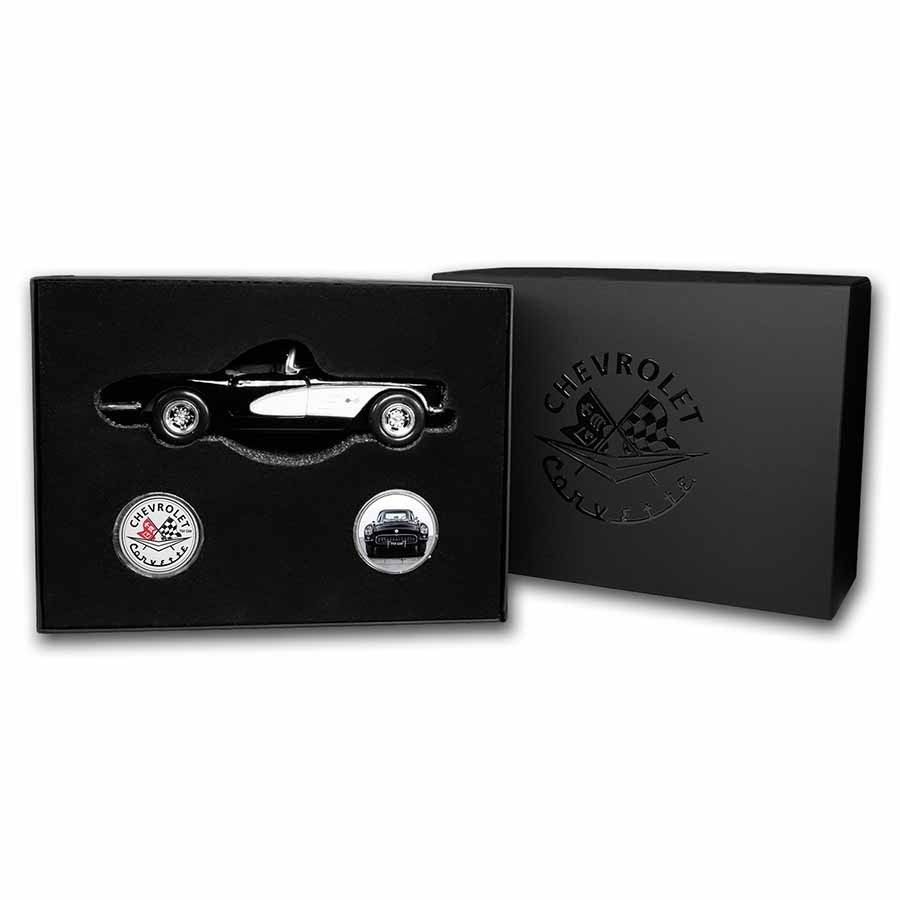 Set Highlights:
Protect your product from fingerprints by adding these cotton gloves to your order.

Shop this black 1959 Corvette Silver round and die-cast car set while supplies last!

1959 C1 Corvette
The first generation of Corvette—also known as C1—was produced from 1953 to 1962. The 1959 Corvette was basically the same as the 1958 model, with a few minor changes. It had a new reverse lockout t-handle on the 4-speed shifter, and an optional black interior. In addition to the fake hood louvers and chrome spears on the trunk, this year's model also has redesigned seats and door panels as well as a shelf under the dash.

A new instrument panel with concave instruments to reduce glare was introduced. The tachometer, seat belts, outside rear-view mirrors, electric clock and dual exhaust were now standard equipment. Optional equipment for the sun visor included seat pleats that ran side to side, rather than up and down as in previous years. This was also the only year that a turquoise soft top was available.

About Corvette
The Corvette is a highly regarded car, and GM has been producing it in Bowling Green, Kentucky for over 30 years. The Corvette, known as America's sports car, is an impressive example of innovation. Consistent production over the past 60 years makes the Corvette the world's longest-running passenger car model. From its inception, the Corvette was destined to be iconic.

The Chevrolet Corvette is a two-door luxury sports car that has been manufactured and marketed by Chevrolet since 1953. It is known for its performance, as well as its distinctive fiberglass or composite panels. Until 2019, the engine was in the front of the vehicle. Since then it has been mid-engine.

The Corvette is Chevrolet's halo vehicle and the only two-seat sports car produced by a major United States auto manufacturer.

Zora Arkus-Duntov was a Belgian-American engineer referred to as the “Father of Corvette” for his work on the Corvette. The first convertible car was publicly revealed in 1953 at the GM Motorama event. Select members of the public were able to purchase it later that year.

In 1963, the second-generation Corvette was introduced as a coupe and convertible. It was originally manufactured in Flint, Michigan and St. Louis, Missouri until its production moved to Bowling Green, Kentucky in 1981.

The Corvette has become an icon of America, known colloquially as "America's sports car." Automotive News reported that, after being featured in the early 1960s TV show Route 66, the Corvette became synonymous with terms like freedom and adventure. It is now widely considered to be both the most successful concept car ever made and the most popular sports car globally.

About Chevrolet
Founded in 1911 in Detroit, Chevrolet is now one of the world's largest car brands, available in 79 countries with more than 3.2 million cars and trucks sold in 2020. Chevrolet models include electric and fuel-efficient vehicles that feature engaging performance, design that makes the heart beat, passive and active safety features and easy-to-use technology, all at a value. More information on Chevrolet models can be found at www.chevrolet.com.

The quality of this Corvette isn't so good due to the condition it came in. The box was scratched up and very hard to open. The car has areas were the paint was missing and worn off. The design is pretty good but would be a lot better if the paint quality was better.