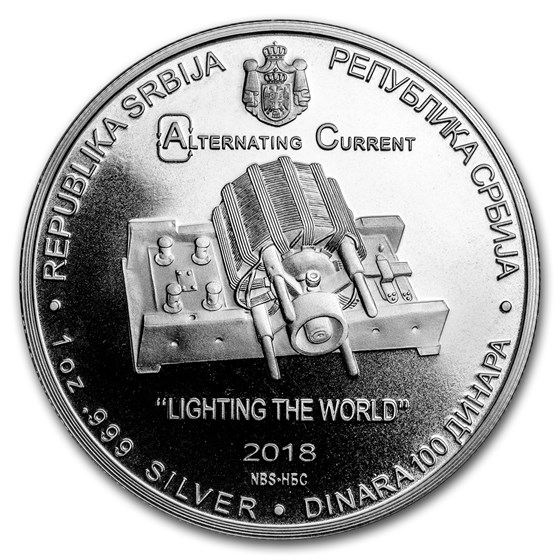 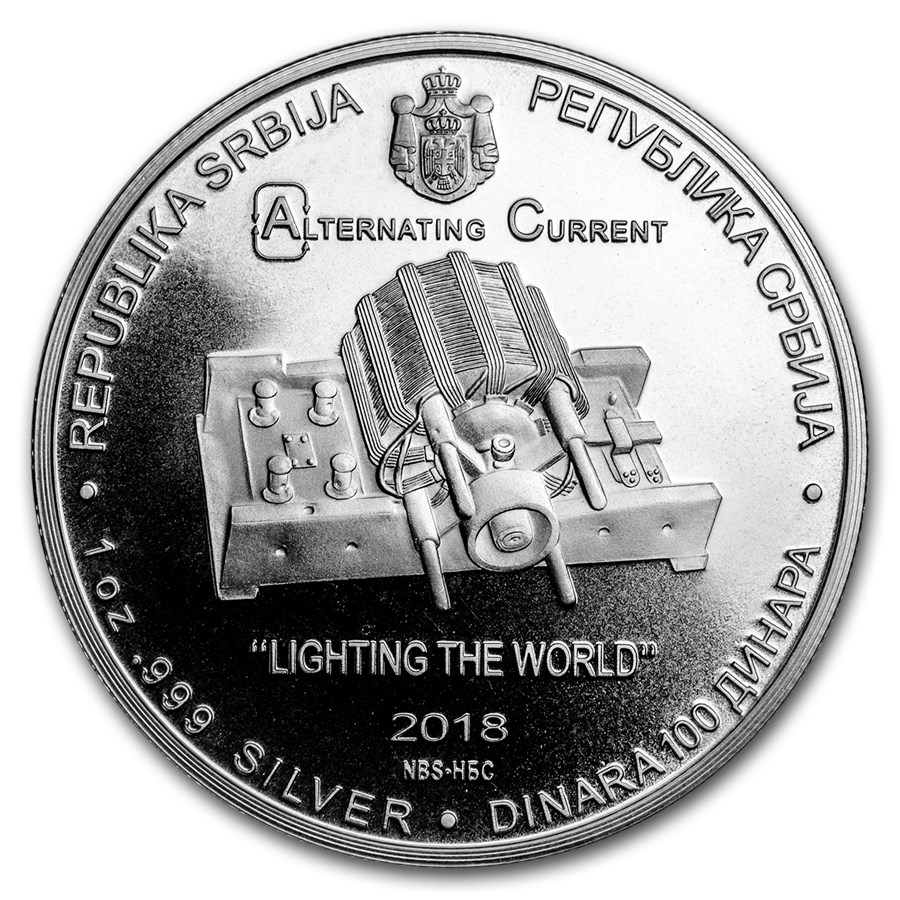 Your purchase is guaranteed to match the quality of the product shown. It will not be this exact item.
Product Details
Product Details
Sold out at the mint! This 1 oz .999 fine Silver coin from the Republic of Serbia commemorating Nikola Tesla is the first coin in the new series. Each coin in the series will feature a prominent invention that helped shape the world we live in today.

This series will run for several years with each coin commemorating some of Nikola Tesla's greatest inventions. Nikola Tesla is one of the most brilliant minds in history and his inventions helped propel our future. In fact, we still use many of his inventions today which is a testament of his creativity and forward thinking.

Nikola Tesla was a Serbian American inventor, electrical engineer, mechanical engineer, physicist, and futurist who is best known for his contributions to the design of the modern alternating current (AC) electricity supply system, which is commemorated on this beautiful coin.

Tesla was truly a remarkable person that devoted his life to discovery while additionally relishing the role of showmanship. Tesla became well known as an inventor and would even demonstrate his achievements to celebrities and wealthy patrons at his lab, and was noted for his showmanship at public lectures.

Born and raised in the Austrian Empire, Tesla received an advanced education in engineering and physics in the 1870s and gained practical experience in the early 1880s working in telephony and at Continental Edison in the new electric power industry. He emigrated to the United States in 1884, where he would become a naturalized citizen. He worked for the Edison Machine Works in New York City a short time before he struck out on his own.

With the World’s Columbian Exposition of 1893 looming in Chicago, Westinghouse asked Tesla to help supply power; they’d have a huge platform for demonstrating the merits of AC. Tesla helped the fair illuminate more light bulbs than could be found in the entire city of Chicago, and wowed audiences with a variety of wonders, including an electric light that required no wires. Later Tesla also helped Westinghouse win a contract to generate electrical power at Niagara Falls, helping to build the first large-scale AC power plant in the world.

One of Tesla's final gifts to the world was a tower near New York City that would have provided free wireless energy to the entire world. The man who financed the construction of the tower shut it down when he learned that there would be no way to regulate the energy which would mean no return of profit on his investment.

Today, because of Nikola Tesla, we enjoy some many wonderful inventions that have changed the world. And, his inventions continue push us toward the future while challenging and changing the world around us.

glad I picked some up when it was in stock