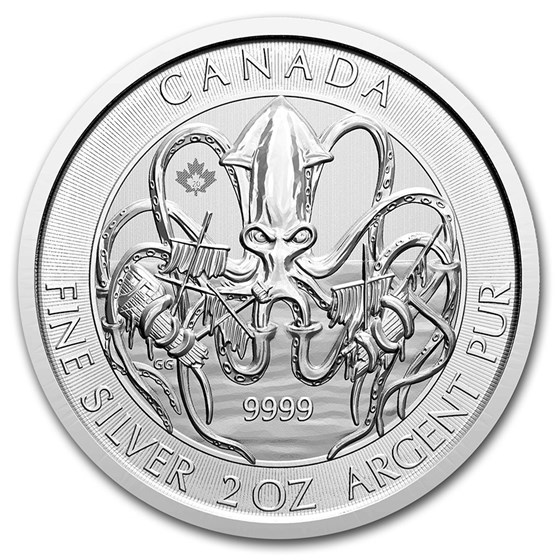 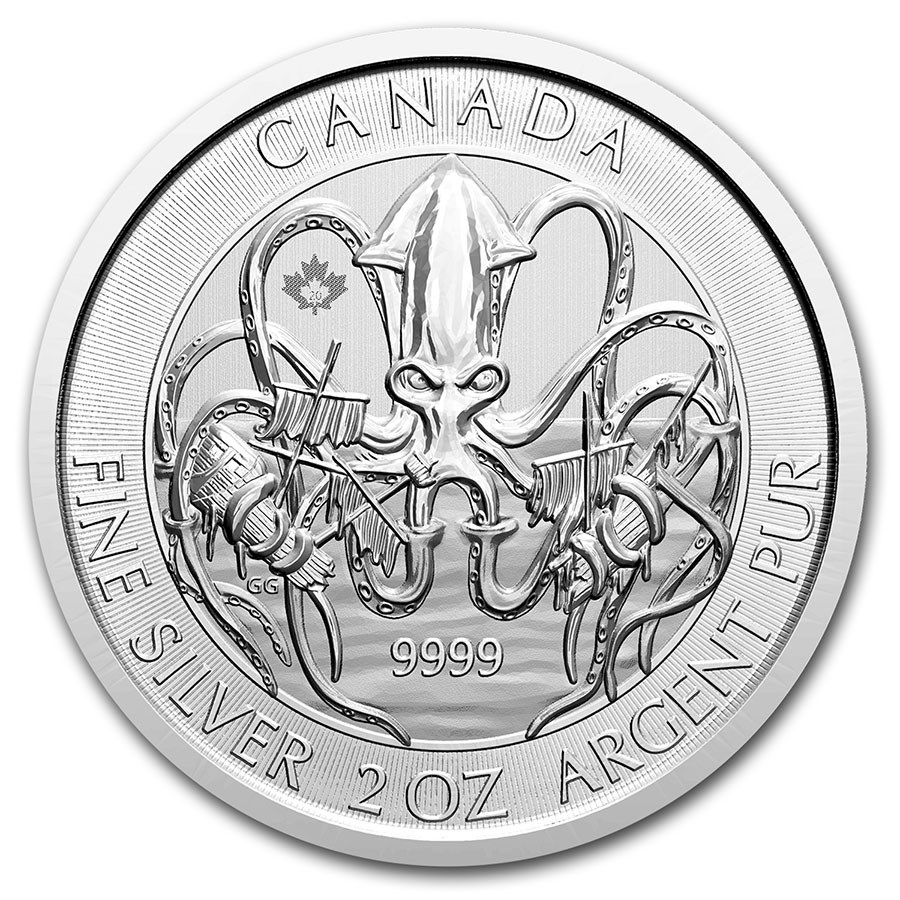 Product Details
Product Details
As low as $4.49 per oz over spot
Masterly crafted from the Royal Canadian Mint comes a terrifying series bringing to life the mysterious mythical creatures that lurk the Nordic seas. The exceptional relief of this stunning 2 oz Silver coin portrays the Kraken attacking a ship.

For as long as ships have sailed the seas, monsters have risen from the depths to strike terror in people’s hearts. One of the most frightening is the Kraken, a massive sea monster with tentacles so large, it can easily destroy an entire vessel, and drag it beneath the waves. From the Nordic countries to Greenland, South Africa and New Zealand, the Kraken appears on sea charts and in European lore as early as 1555.

Add this 2 oz Silver Kraken coin to your cart today!

The Creatures of the North Silver Coin Series
The Royal Canadian Mint has plumbed the depths of the oceans to develop a theme for this Silver bullion coin series. The Creatures of the North 2 oz Silver coins will celebrate the fantastic and mysterious creatures of Canada’s seas, lands and skies. The series follows a bi-annual release schedule, so keep a watchful eye out to see which creature will emerge from its lair next.

Awesome coin. A few of these reviews mention the dings around the edge, the Krakens I received had this issue as well. I think it is from the tubes they are shipped in from the mint. Other than that this is a really cool coin and I will certainly be purchasing more from this series!

Hands down, this is my favorite silver coin! The design and detail are great. One minor con is that most of the Krakens I have received have very small dings in the rim...probably from the mint? Overall, still my favorite and I look forward to the next minting in the series of Creatures of the North.

Originally I picked this up as a present, the coin had such good eye appeal that I had to buy more, I'm definitely looking forward towards the rest of the series.

This coin is awesome.

This coin is awesome. I can't wait till the next coins in the series comes out.

Aside some dents around the edge, I love the design, mystical theme, and hefty feel of this 2oz coin. It'll make a great gift to my kids. The brand also makes it a good investment

Could have been really cool...

Cool design, relatively low premium, but has several noticeable dents around the edge. Not a big deal if you're like me and just trying to stack silver but still a little disappointing.

Great For Your Collection

These are exceptional coins. I bought mine when they were in preorder and I received them right after their release. They come in a standard plastic APMEX flap, and sealed in a bag (individually). I then bought 2 oz. holders from Amazon and placed them in. The coins look great and are amazing!!!!