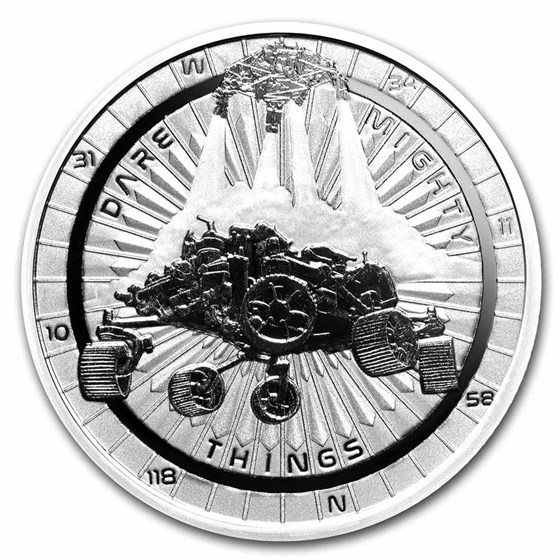 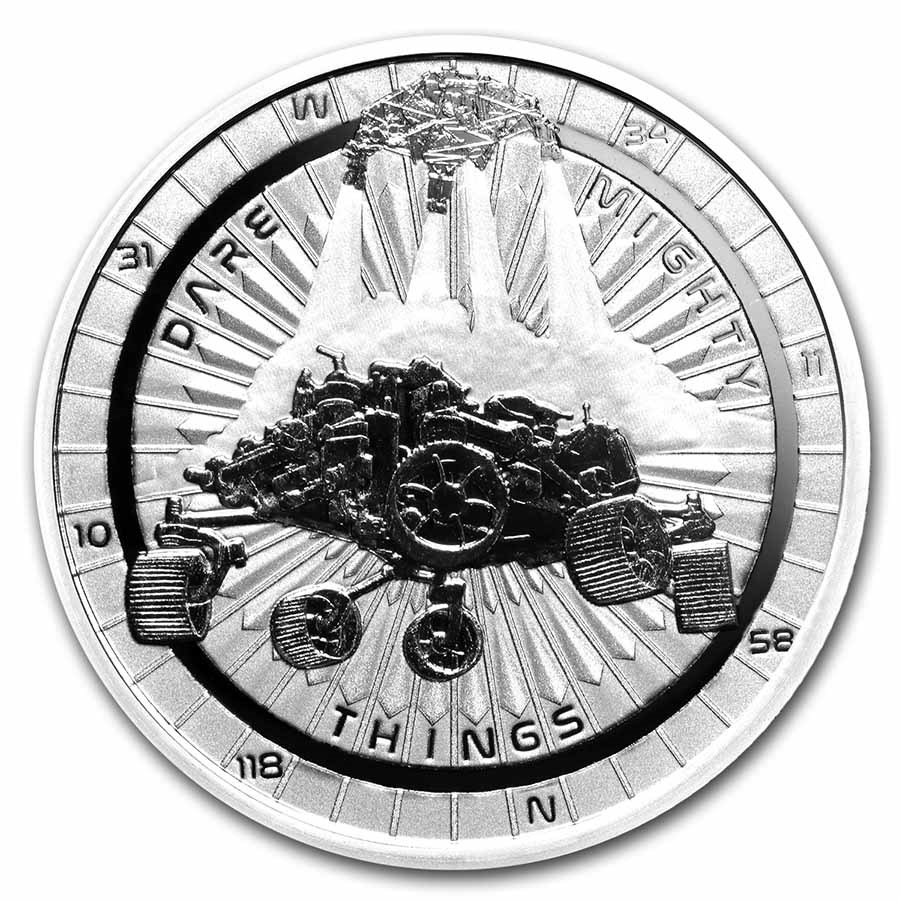 Protect your 2021 Niue 1 oz Silver $2 Perseverance Mars Rover in storage from the adverse effects of moisture in the air by adding these silica gel packets to your order.

Perseverance Mars Rover
Mars has fascinated scientists for centuries, and has long been thought capable of supporting life. The Perseverance Rover, part of NASA's Mars 2020 Mission, was sent to explore the Red Planet on July 30, 2020. Its goals, as stated by NASA, are to identify past environments capable of supporting microbial life, seek signs of possible past microbial life in those habitable environments, collect and store core samples, and test oxygen production in the atmosphere. In order to have the best chance of achieving these mission goals, NASA sought to land the rover in Jezero Crater, a crater thought most likely to show these signs as it included inflow and outflow channels as well as an evident delta deposit, all indications that it was at one time a massive lake. On February 18, 2021, confirmation that the rover had successfully landed at this location was received at 20:55 UTC.

The design of the coin seeks to incorporate as many details of the landing as possible for a true symbolic piece to commemorate this feat. The obverse is an image of the rover landing on the surface with the assistance of the rocket-powered descendant stage. This stage was designed to counter the gravitational pull of the landing by creating upward force using jet propulsion. Surrounding the rover is a stylized image of the parachute, which also assisted in the landing. The parachute is unique in that it contained code which was later deciphered by internet users. The words "Dare Mighty Things" as well as the coordinates for the laboratory where the rover was designed are seen on the parachute and coin. The reverse features a clock set to the time confirmation of the landing was received. It also features symbols of the development of life on earth, which, like the parachute, were secretly included on the mission. These are included around the edge of the camera on the rover itself.

This release marks the first exclusive developed in collaboration with The Pressburg Mint. The Pressburg Mint, also named Bratislavska Mincovna, is based in Bratislava, Slovakia and revives the centuries-old minting tradition of the country. The mint strives to produce bullion and Prooflike product of the highest quality and is known for its ever-evolving yearly releases, namely the Terra, Vivat, Chronos and ICON programs.

This would make a great peace for any NASA fan

Has an attractive design.

Best round for the money

incredible visual design. both sides are equally nice, it's like getting two rounds for the price of one

Glad I got this one.

I love everything space, so I had to get this when I first saw it. it’s shipped in a plastic capsule and is well protected.

Great coin for any collection. Stacking silver is cool, but how can anyone resist this one?

This space exploration commemorative piece is a wonderful addition to my collection. the design is appealing to the eye on both sides, and every element is carefully thought out and positioned to make the most of the 1oz space. I watched the landing as it happened, having followed the mission closely from it's inception. Percy is truly a worthy successor to our dear Oppy, and I love being able to keep such an great looking momento of the journey in mankind's space exploration in a neat and shiny package on my desk. The sealed capsual it comes in is a great feature for such a finely designed coin, as it guarantees that the many different struck surfaces, details, and mirror finishes remain flawless. This really is a coin to admire through the plastic to ensure it stays bright and clean for as long as the Rover remains on the surface of the Red Planet.

Great one to add.

I really like the design and detail of this coin. With lower premium hard one to pass up. Another great pick up through APMEX.

Own a part of human and mechanical history.

For anyone remotely interested in space exploration this coin is a MUST! This coin has far exceeded my expectations. The engraving is remarkable, Background of the rover is nicely laid out and good detail. and the date the The Clock concept is simple yet effective. the date and place of the landing is a bit hard to read even with the aid of magnification. That said it is understandable with the Ltd. space on the coin for that issue. So own a bit of modern history. and who knows one day one of these coins will be on Mars.