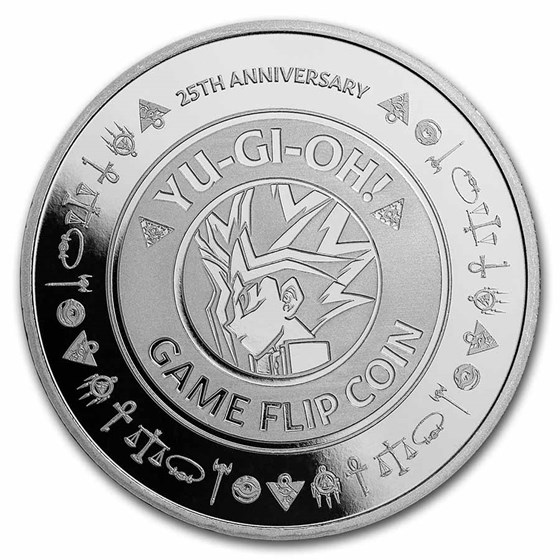 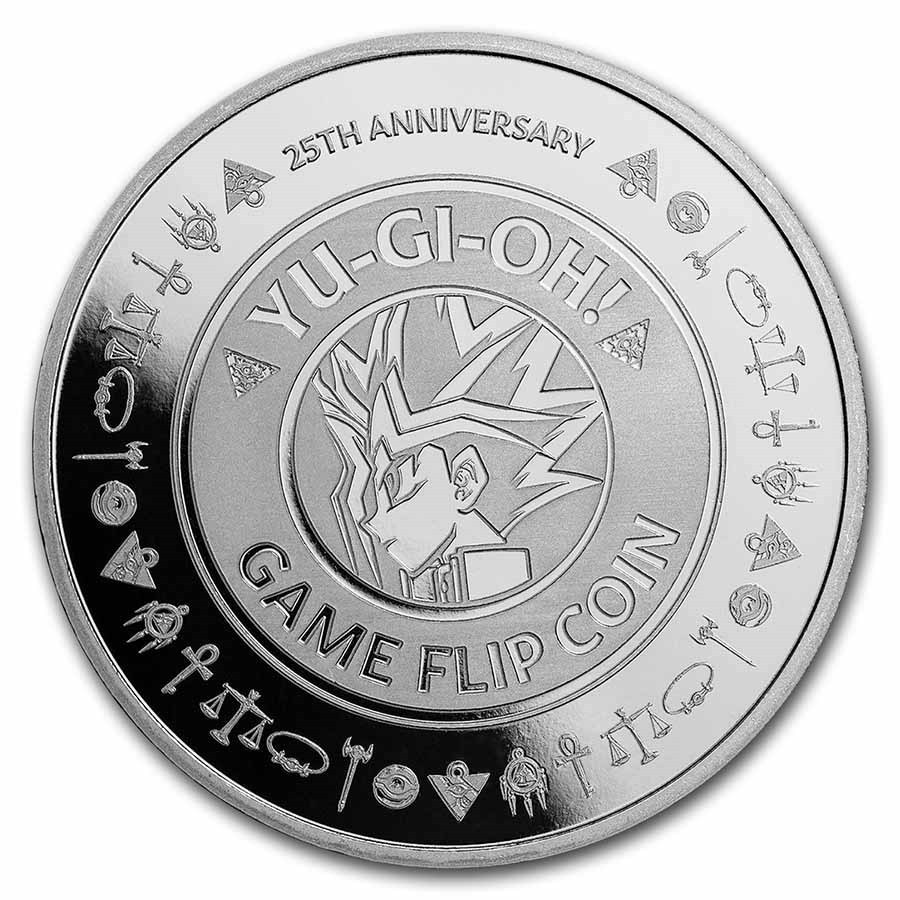 Product Details
Product Details
As low as $5.49 per coin over spot
APMEX and KONAMI are proud to bring one of the most popular manga series and trading card games in the world to the investment marketplace to commemorate and celebrate the 25th anniversary of Yu-Gi-Oh!


Protect and display your limited edition coin in style by adding one of these Magic Frame Display Boxes to your order.

Start every game of Yu-Gi-Oh! with this game flip coin to decide who plays first by adding this 2022 Niue 1 oz Silver $2 Yu-Gi-Oh! Game Flip Coin to your cart today!

KONAMI
Originally founded in 1969, Kagemasa Kozuki started the company as a jukebox rental and repair business in Japan. In the 70s, KONAMI began making coin-operated arcades games. It wasn't until the early-80s when the corporation started achieving mainstream success with their hit arcade games such as Frogger, Scramble, Super Cobra and Yie Ar Kung-Fu, which was inspired by the legend, Bruce Lee. Today, KONAMI is one of the largest gaming companies in the world. It boasts an impressive portfolio of franchises like Metal Gear, Silent Hill, Castlevania and Dance Dance Revolution.

Yu-Gi-Oh!
Yu-Gi-Oh! debuted as a manga in 1996, written and illustrated by Kazuki Takahashi. Published in the Weekly Shonen Jump magazine, it didn't take long for the manga to gain steam and eventually spawn into an anime series and later an actual trading card game. Since being first introduced in the mid-90s, Yu-Gi-Oh! has become one of the world's largest grossing media franchises of all time.

Premise
The story follows a bullied teenager in high school, Yugi Mutou, who one day solves the ancient Millennium Puzzle. By solving the ancient Millennium Puzzle, Yugi awakens an alter-ego or spirit that likes to gamble and solve conflicts through games such as cards, dice, or role-playing board games. Yugi uses this newfound power to awaken his alter-ego known as Yami Yugi by challenging those with darkness in their hearts, but only if threatened. Yami Yugi would awaken and challenge them to a game known as Shadow Games. The game reveals the true nature of someone's heart while the loser of the contests would often be subjected to a dark punishment called a Penalty Game. Later on in the series, Yugi and his friends eventually learn that the alter-ego inside of the puzzle known as Yami Yugi is actually a nameless ancient Egyptian pharaoh who lost his memories. Yugi and his friends vow to help the ancient Egyptian pharaoh regain his lost memories. Along the journey they find themselves going through dangerous trials, wagering their lives while facing off against gamers that wield the other Millennium Items and the dark power of the Shadow Games.

Gameplay
The Yu-Gi-Oh card game itself is a turn-based game where you duel against an opponent and their deck of cards. The goal is to summon Monster Cards to attack and reduce your opponent's Life Points. In the card game, there are three main types of cards that make up the 60-card deck: Monster Cards, Spell Cards and Trap Cards.

Will make a nice gift

Bought this with a friend in mind. They're a big Yu-Gi-Oh fan.

This is must have if you or know someone that was a huge Yu-Gi-Oh fan in its time. The “Public Seal of Niue” may be small, but it’s by far an amazing coin to add to the collection

Nicely minted simple and clean. good depiction of Yugi, sharp and clean. this is a must for the movie and card game lovers.

Nicely minted simple and clean. good depiction of Yugi, sharp and clean. this is a must for the movie and card game lovers.

The coin is very nice. You do not see many Yu-Gi-Oh! coins out there, especially for the 25th anniversary celebration. I like the design they chose for it. Definitely recommend to other Yu-Gi-Oh! fans out there.

I love the show when I was younger play the game on occasion so this was a no brainer! the coin looks fantastic, the only thing is the capsule it seals right but it I think it's a 40mm not 39mm because it moves a bit unlike the Sonic coin that's the same dimensions in actual 39mm capsule and doesn't move. Overall great con

see this it brought back so many memories of my childhood I had to have it looks amazing in person great detail arrived in a air tight capsule very happy with my purchase!!!