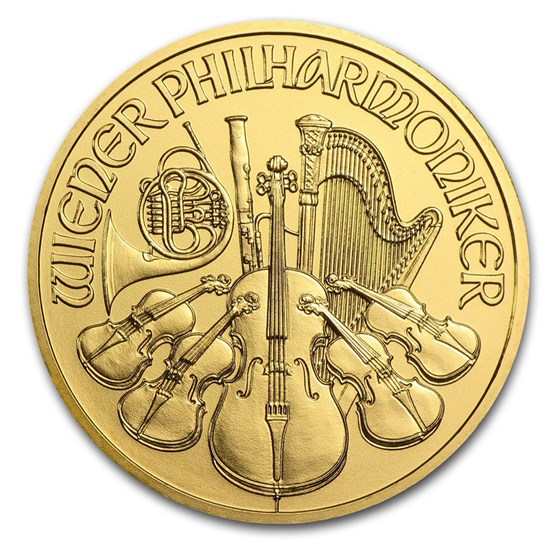 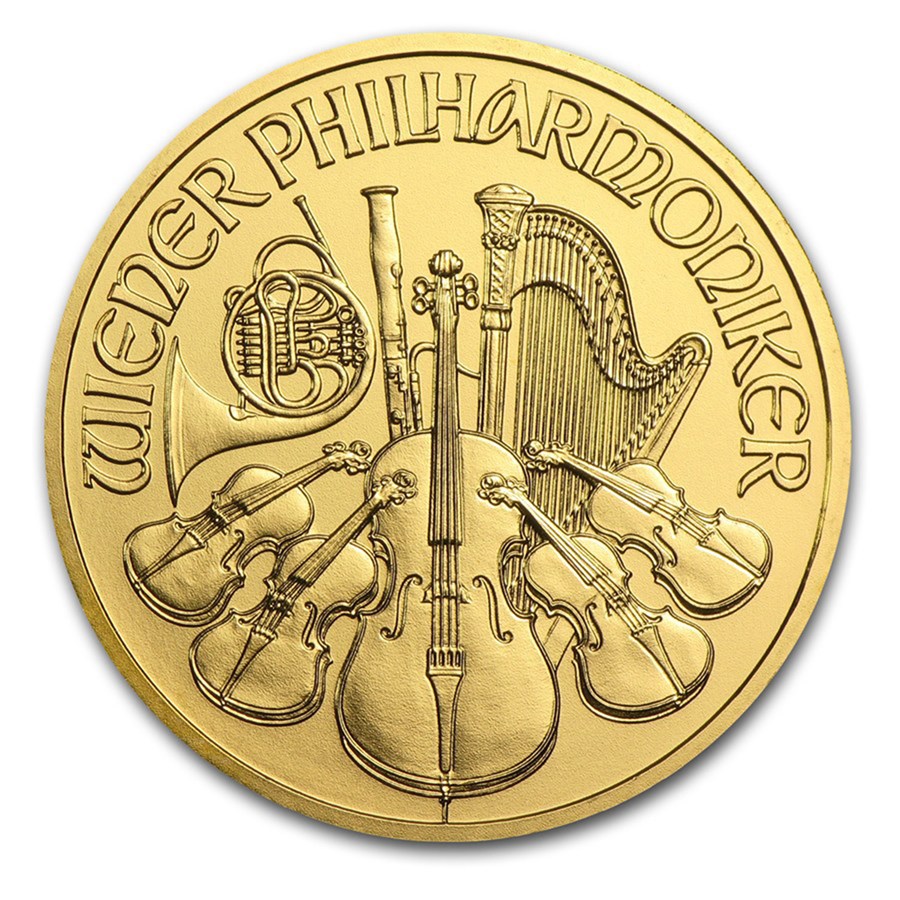 Product Details
Product Details
Each of these beautiful .9999 fine Gold Austrian Philharmonic coins comes to you in Brilliant Uncirculated condition, allowing the well-known design to shine through. Each coin contains 1 oz of Gold, making these an ideal investment piece.

This stunning Gold bullion coin is loved around the world for its 1 oz metal content and classic, recognizable design. Add the 2015 Gold Austrian Philharmonic to your cart today.

Invest in 1 oz Austrian Gold Philharmonic, one of the world’s bestselling coins.

Austrian Gold Philharmonic coins are named for the Vienna Philharmonic orchestra, which was founded in 1842 and is considered one of the finest in the world. The design of these Austrian Gold coins was inspired on both sides by the Philharmonic orchestra. Since the Austrian Mint introduced the Gold coin in 1989, it has been one of the world’s bestselling bullion coins. The Gold coin was originally minted in 1 oz and 1/4 oz, but has been available in 1/10 oz since 1991, 1/2 oz since 1994, and 1/25 oz since 2014.

Many investors find that Austrian Gold Philharmonic coins are an excellent addition to their investment portfolios and the Gold coins can be an ideal choice for Precious Metals IRAs. These 1 oz Austrian Gold coins that are .9999 fine Gold exceed the Internal Revenue Service’s minimum fineness requirement for Gold, which is .995 fine Gold. Before buying Austrian Mint coins for a Precious Metals IRA, the IRS first requires that you open a custodian account, and our APMEX specialists are happy to direct you to a number of reliable IRA custodians. Then add these Gold coins and many other Gold bullion products that qualify for a Precious Metals IRA to help create a balanced portfolio.

This is a must have coin

nothing but smiles over this coin.

Finally - a gold coin that matches it's silvery mate

Ever want to stack all your coins, but couldn't because of their different diameters? Well, problem solved. The Gold Harmonica is the exact same diameter as it's silver side kick. So no more silver stack and gold stack side by side - now both together in one really neat stack.

Have wanted the 1 oz. coin but really like the 1/4 oz. for some time. Received the 2015 1 oz. today and couldn't be happier. I like the size especially. Very nice and will be buying more.

WOW, what a beauty!

What a beautiful coin. Larger and thinner than other 1 ounce gold coins, but what a great coin. Came in excellent condition. Thanks APMEX!!!!

The large diameter of this coin allows the designs to show very clearly. The gold one ounce is as large in diameter as the silver one ounce, which was a good decision by the Austrian mint in my opinion. Your Buffs, Eagles, Krugs, Maples and Roos are all about the same size, so this stands out. Apmex had a super price and delivered promptly and securely as always.

I purchased this coin as a gift for a recently born child. While value was important, I also wanted a beautiful coin. I've seen all the major gold coins at one time or another. IMHO, the Austrian one-ounce is the most beautiful gold coin - particularly the obverse with the musical instruments. I also received good service from APEX - the coin is mark-free and shiny, and shipping from prompt.