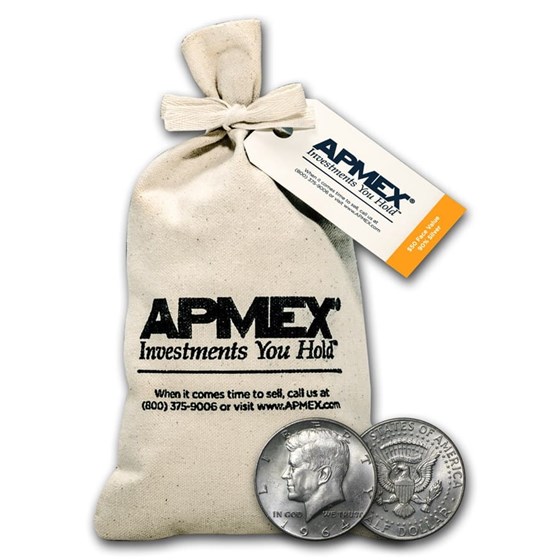 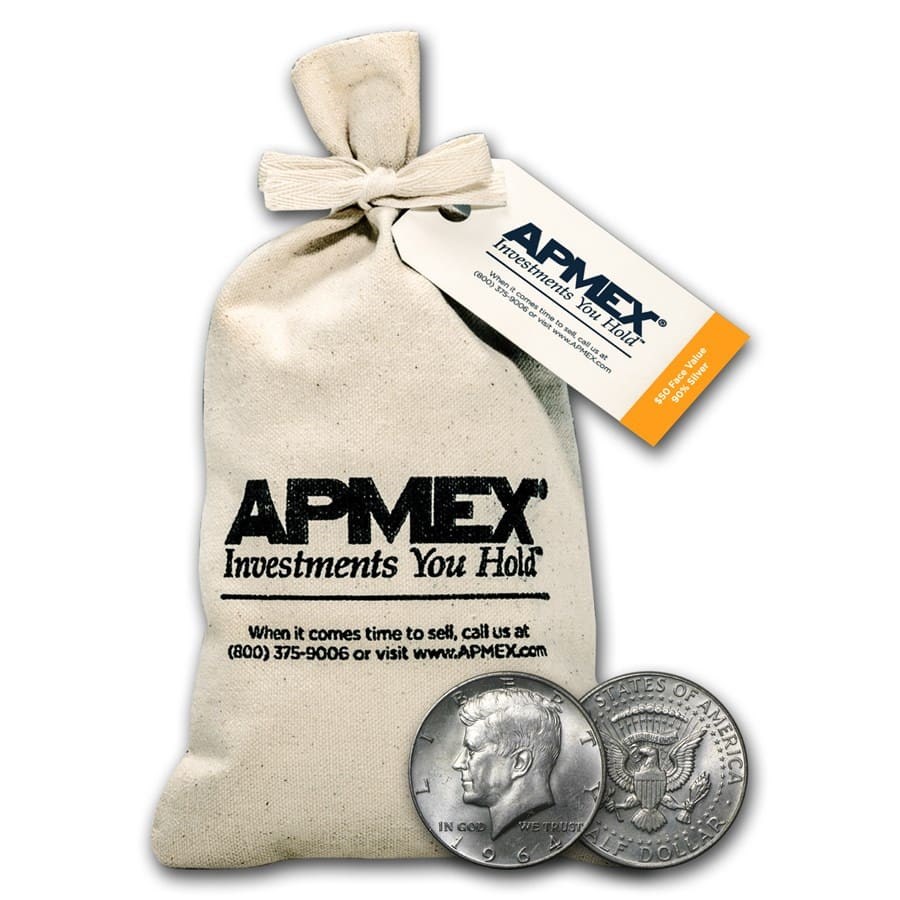 Product Details
Product Details
These coins are struck to honor the 35th president of The United States: John F. Kennedy. As a one year only type (circulation quality 90% Silver) these coins are highly desirable among many Americans, especially those that lived during his presidency.

Pre-1965 90% Silver coins, sometimes referred to as junk Silver or scrap Silver, are a great way to start your Silver investments. These Silver coins were pulled from circulation with the introduction of copper/nickel clad coins and the rising demand of Silver. The public saved them for their 90% Silver content as a rainy day fund they can fall back on.

$50 bag of avg circ kennedy halves.... Came in better than expected quality... no wear, some AU, some almost BU, some with slight toning... only 1 coin with abrasion... a very nice batch overall... very pleased, especially at the low $ amount over spot.

The 1964 Kennedy halves are mostly in fantastic shape. Thick, weighty silver steaks. My $50 face bag had $49.50 face in '64 halves and one 2002...looks like someone cracked open a silver proof because the edge shows no copper cladding and the clink says, "I'm silver." Still it's only 80% silver whereas the rest are 90% silver, so it feels like I got a slightly dented new car, if you know what I mean.

Good variety. Many bu's. Will buy a larger bag.

a good buy for my investment purposes

1964 kennedy half dollars. some were in excellent condition.

FULL WEIGHT - THAT'S WHAT IT IS ALL ABOUT! GET IT HERE NOW!

One of the aspects of purchasing 1964 Kennedy halves is one's assurance of full-weight. Often bags or rolls of circulated silver coins are significantly worn due to handling during years of active circulation. This never happened to 1964 Kennedy halves. They began to be extracted from circulation by the general public, banks, and other entities the very MOMENT that silver was removed from US coins in 1965. Yes, I know. 40% Kennedy halves went into the flow from 1965-1969, with only Proof 90% coins still being minted into the future, in order to replace the expensive 90% coins. As you know, that didn't last long, and the CLAD or 40% halves were even scooped up by hoarders of precious metal. Therefore, our subject coins, the 1964 Kennedy half dollar never got a chance to get worn out. They were pulled out of circulation almost as fast as they were minted. It is rare to get a worn out 1964 Kennedy half. Just as a funny side note, I DID get one half dollar that was a slug. Wow, amazed, I called Ampex and they sent a replacement coin immediately, and without question. I got to keep my rare slug. It must have been a "large pocket coin" for some gentleman for decades, as all features are GONE. Neato. Special slug. Anyway, 'nuff said. Get your 1964 Kennedy halves NOW, don't wait people. Let's corner the market and take 'em all. Happy Thanksgiving! May 2017 bring retirement to the old gold and silver bugs! Sincerely, SilverManiac!!!

600 CENTURIES of INDISPUTABLE VALUE & status as the ONLY REAL MONEY!

NOTHING BETTER THAN A NICE BAG OF SILVER COINS! Thank APMEX! Received a NICE bag of Kennedy halves (XF-BU). Many actual MS60 level specimen! My friends, anyone who is interested in seeing silver increase in value, needs to get on the bandwagon NOW, and start a great habit of routine buying. WE THE PEOPLE are far more powerful due to our numbers than Nelson & Herbert Hunt ever thought of being. The tiny silver market is on the edge of a monumental breakout. Over $100 an ounce is coming soon! Be part of it. WE THE PEOPLE can stop the cheatin', thievin', banksters from hiding the true value of precious metals by making them disappear. Get your stash. SILVER IS THE LINCHPIN OF THE FINANCIAL MARKETS OF THE WORLD. These silver coins are globally-recognized and nearly universally-accepted as money! Known and trusted forever. Kennedy halves are always popular, and resale is excellent. However, I'd say, "Grab a giant sack of circulated dimes, too!" We don't wanna use a Kennedy half for a loaf of bread, or a gallon 'o gas either! BUY SILVER, BUY GOLD, Have faith! APMEX is a great source for us, and they operate on very reasonable, transparent margins for such a big outfit. Free shipping, too! 10/1/16 (If we can clear the shelves at APMEX, we can control the financial world and turn the tables on the banksters with our favorite element nobody can fake or make. Stop hesitating! BUY NOW, and help us all get the return WE DESERVE for being the true smart money! Physical is the only way! BUY MORE!

"I will buy again"

I am happy with my Kennedys, and a few Frankland's jumped in my bag, Thank's APMEX

Worth the price for this product! Love the bag!

Waited and waited for this value! Coins are in almost perfect condition and will be buying this again to add to my investment.