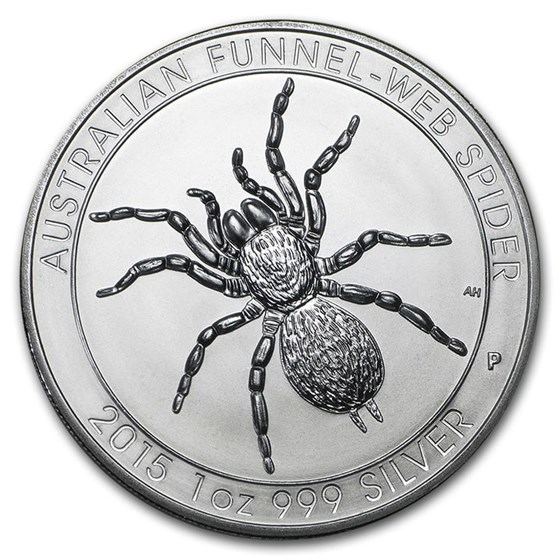 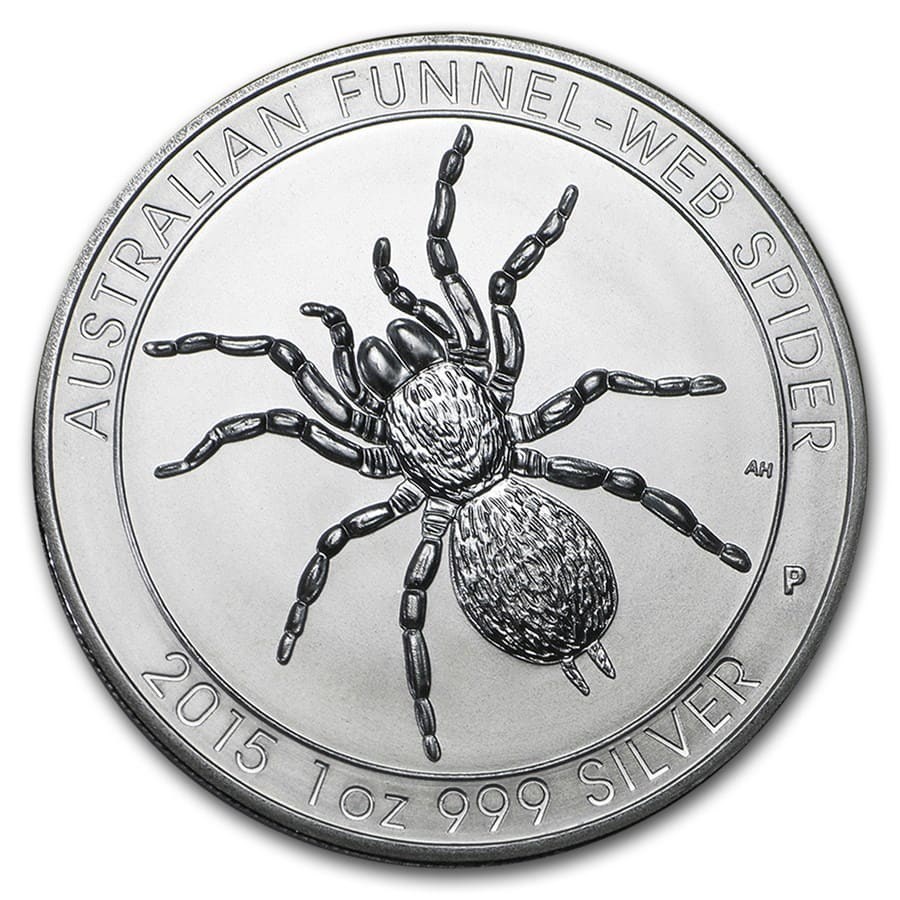 $31.42
As Low As
Product Details
Product Details
The Perth Mint is known for their designs of exotic and dangerous creatures. This exquisite 2015 1 oz Silver Funnel-Web Spider coin combines .999 fine Silver value with a unique and stunning visual image.

Coin Highlights: Protect your Silver Spider coin in style by adding an attractive display box to your order.

Start your Silver coin collection by collecting coins from a series.

When collecting for the very first time, it is good to get an idea of what kinds of coins interest you most so that years from now you have a true collection rather than odds and ends. Many collectors start with a Silver coin series such as the Perth Mint’s Deadly Animal series or the Royal Mint’s Chinese Lunar Year series because the prices of these Silver coins tend to be close to the Silver spot price when they are initially issued. When buying Silver coins, some collectors choose ungraded coins initially in order to determine which coins they find most appealing. After deciding which Silver bullion coins you like best, you can consider adding mint state 70 grade coins to your collection.

The history of the 1 oz Silver Funnel Web Spider

APMEX has these Silver coins for sale that continue the Perth Mint’s focus on creating Australian Bullion coins featuring deadly animals of Australia. The first Silver coins with this theme were the 2014 Saltwater Crocodile coins. Like its predecessor, 1 oz Silver Funnel Web Spider coins are struck from .999 fine Silver, and their mintage is limited to one million. Buy the Australian coins for investment or for collecting, and browse our other wildlife-themed Australian coins for more options.

Why invest in the 1 oz Silver Funnel Web Spider?

Investing in Silver coins is one way that many investors choose to preserve their wealth. Adding these Silver coins to your investment portfolio can also help you hedge against inflation because the Silver price has historically remained stable when the economy has weakened. Silver coins like the 1 oz Silver Funnel Web Spider are an excellent choice for investment because the bullion coins are priced close to the Silver spot price, providing an opportunity to acquire more Silver bullion for less. The Australian coins are also sovereign coins, which means the bullion coins are guaranteed for purity and weight by the Australian government.

It came in mint condition and looks great

I purchased this coin because I like Perth Mint and Australian coins. The coin is in perfect condition with no marks. I like the spider detail. The hair on the spider looks absolutely awesome. I love this series of coins! I hope to get more of these coins. APMEX delivered in a flip, with fast and secure deliver. If you have any doubt, buy this! Buy with confidence!

I bought a few of the animal coins for my kids to get them started in collecting silver coins. They love the coins.

This is a beautiful design. The details on the spider are very lifelike. I am looking forward to purchasing more designs from the Perth mint.

New to Coins, Good for kids

My first venture into coins and gold/silver buying. This came quickly and is brilliant and beautiful! I bought this for my son who is spider obsessed and he loves it. It fits nicely into the disc I bought to hold it and he carries it and looks at it and tells strangers about it. Thank you! He's a happy kid and I will expand my silver and gold banks.

Bought this for my 5 yr old nephew for Christmas he loved it. Can't go wrong w/this purchase. CH in NJ

Gave these as a Christmas gift to my nephews they loved them and loved the spider on the design, and as always wonderful service with APMEX.

I liked the design of this as well. I wanted to get something to add to my collection that had an attractive design and was eye catching and this was just that. Also it is well protected when it is shipped and it really great condition

Not as shiny as some coins but already sold out at the Perth Mint. Got this to go with my Saltwater Crocodile , and condition was excellent. Love variety in my collection and this Funnel Web Spider is really cool and creepy! APMEX was great to deal with.