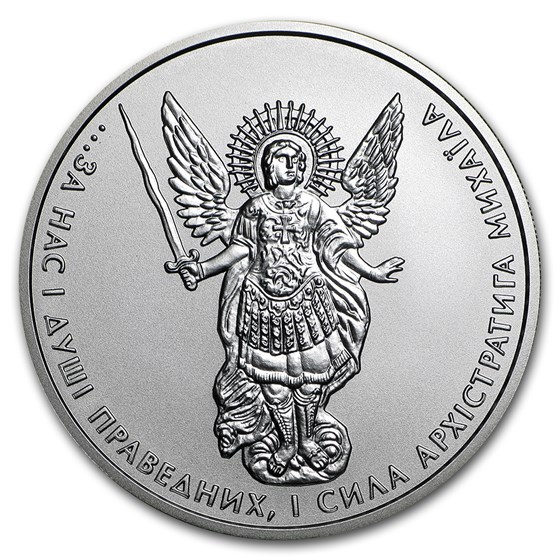 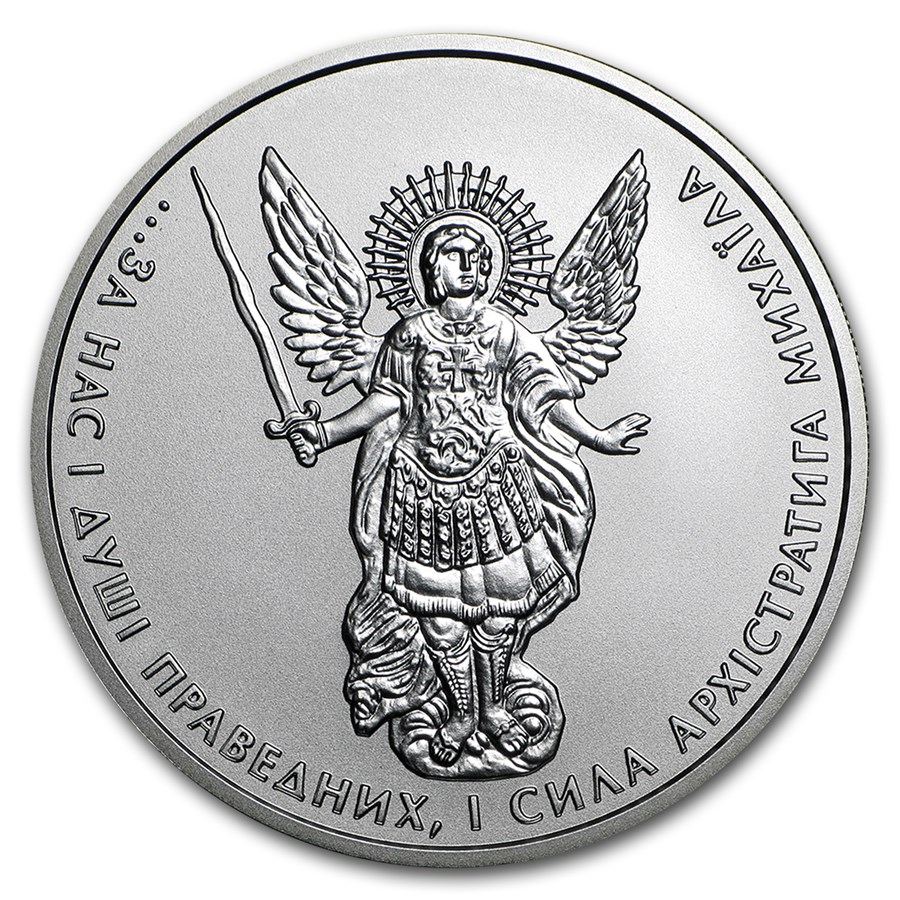 $38.04
Any Quantity
Product Details
Product Details
A mintage of only 24,705! The Archangel Michael is exquisitely displayed in this 1 oz Silver coin from Ukraine. These coins are legal tender of Ukraine and are known for their uniqueness and rarity.

Coin Highlights:
Archangel Michael is the honored protector of the Ukrainian capital and estate. In his legacy, the National Bank of Ukraine has commemorated an elaborate coin with acute craftsmanship for collectors worldwide. Its distinctive characteristic and scarce availability has increased collectors demands for it from all over the world. The Archangel Michael is one of the most honorable Bible characters, and is well-known for winning a victory over evil and being a patron of warriors, the sick and the suffering.

Don’t miss out on the opportunity to add this magnificent 2014 Ukrainian 1 oz Silver Archangel Michael coin to your cart today!

Michael is an archangel in Judaism, Christianity and Islam that is sometimes referred to as Saint Michael, Saint Michael the Archangel or Taxiarch Archangel Michael. Michael is seen as a healer, leader of the army of God against the forces of evil and protector of children. The Archangel Michael notably is known as being the angel that led the defense of Heaven, defeating the dragon, sometimes referred to as Satan or the devil, and his angels. Scholars believe Michael is the unnamed angel used by God in multiple significant stories of the Old Testament.

Artistic depictions and religious iconography vary in their portrayals of Michael. The Archangel Michael is sometimes seen with a full suit of Roman-inspired armor, a flaming sword in his right hand and his bird-like wings spread open in full display. One of the most famous depictions of Michael is of the Archangel standing tall above the dragon ready to slay it with a spear or sword.
Related Searches
Gold and Silver Ukraine Archangel
2017 1 oz Silver Ukraine Archangel Michael BU

This is an unusual coin from Ukraine. My received coin was virtually flawless, with good luster. As a bullion piece or as a collectable, this coin is recommended.

I was very satisfied with the Ukraine Silver Angel.

Very nice looking coin, I'm very pleased. The original case was shattered when I received this coin. Luckily I ordered a case for it during the same purchase. So it's good to go.