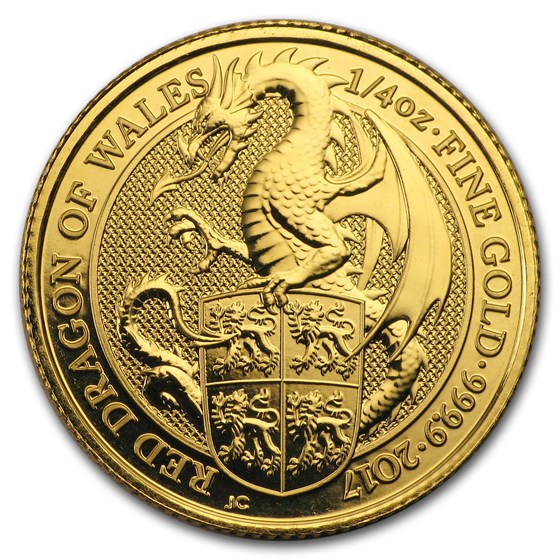 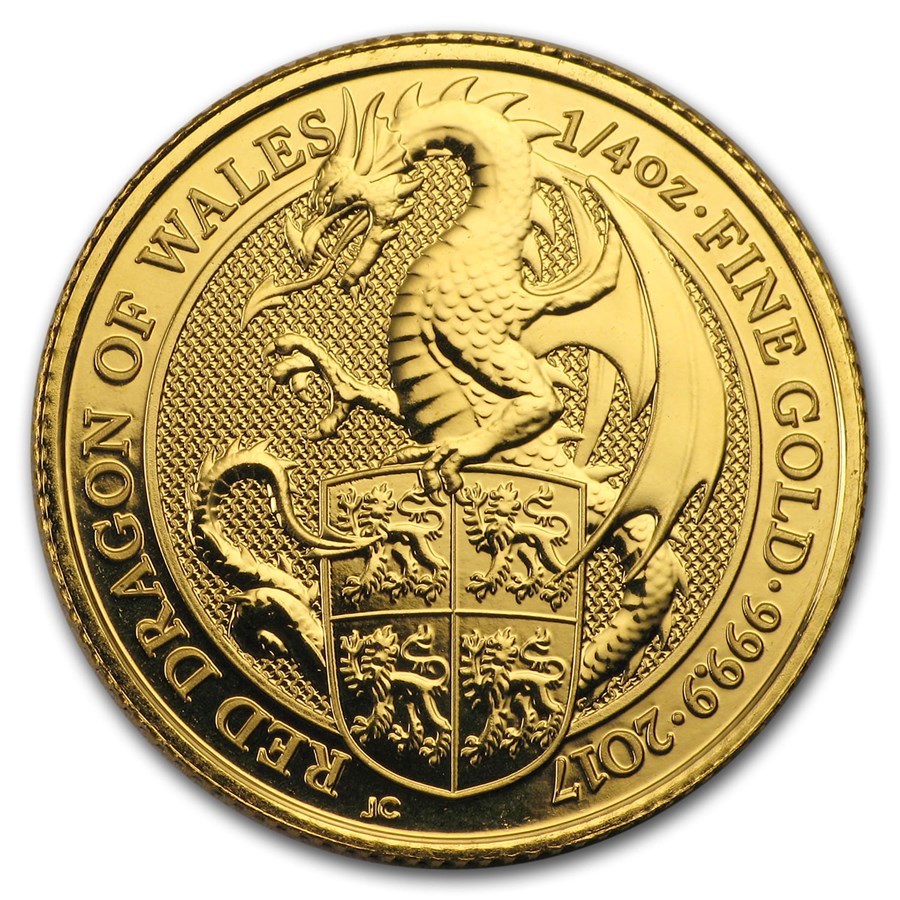 Your purchase will match the quality of the product shown.
Product Details
Product Details
Intricate details add a sense of power to the Red Dragon of Wales, the third release in the popular Queen's Beasts series.

Coin Highlights:
Display your 1/4 oz Gold Queen's Beasts: The Dragon in style by adding an attractive display box to your order.

Add the third coin of this exciting new 10 coin series to your cart today!

The Red Dragon is the third release of The Queen's Beasts Commemorative and Bullion Collections. These popular coins are sought after by collectors and investors alike. The 1/4 oz Gold coin size is affordable and will work within any level of investor today. You can own these popular, well designed Gold Queen's Beasts Dragon coins at competitive prices.
The 2017 Great Britain 1/4 oz Gold Queens' Beasts Dragon Coin is one of three new releases from The Royal Mint.
See More +

The fractional Queen's Beasts Gold Dragon coins are affordable and add diversity to any investor portfolio. Each Gold coin contains 1/4 oz of .9999 fine Gold. The coin displays the fierce and heroic mythological red dragon. It is a symbol of strength and used as a supporter in the English Crown's coat of arms. Buy 1/4 oz Gold Queen's Beasts Dragon Gold coins today at competitive prices.

The detail is wonderful on this coin. I enjoy it in my collection.

great service from Apmex. This series is a winner from The Royal mint

Just received this coin and it is absolutely stunning. It's small but there is a noticeable weight behind it. I'm very pleased with this coin, well worth saving for. A must have for any collector.

A beautifully struck coin. Lovely motif and design. The series tells a story of Empire and history. Nice addition in pure gold to any collection.

I figured if a person could buy only one Queen's Beast coin in gold, get the dragon. It was a reward choice. The dragon looks strong even on the 1/4 coin I bought. While this is "just" a bullion coin, its going to be treated as a collectable just to keep this beautiful coin blemish-free.

Love it, as beautiful as it's co-pieces in the Queen's Beasts Collection!

The queen's beasts series is a beautiful offering and of interest to anyone who likes coins and has a British heritage. The coins were at a reasonable price, delivered quickly and arrived in mint condition.