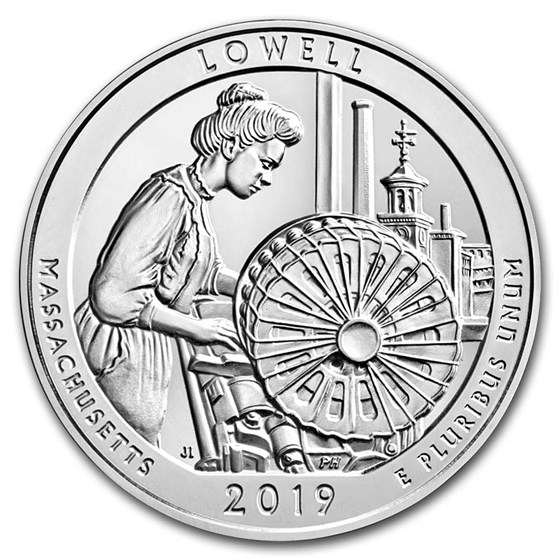 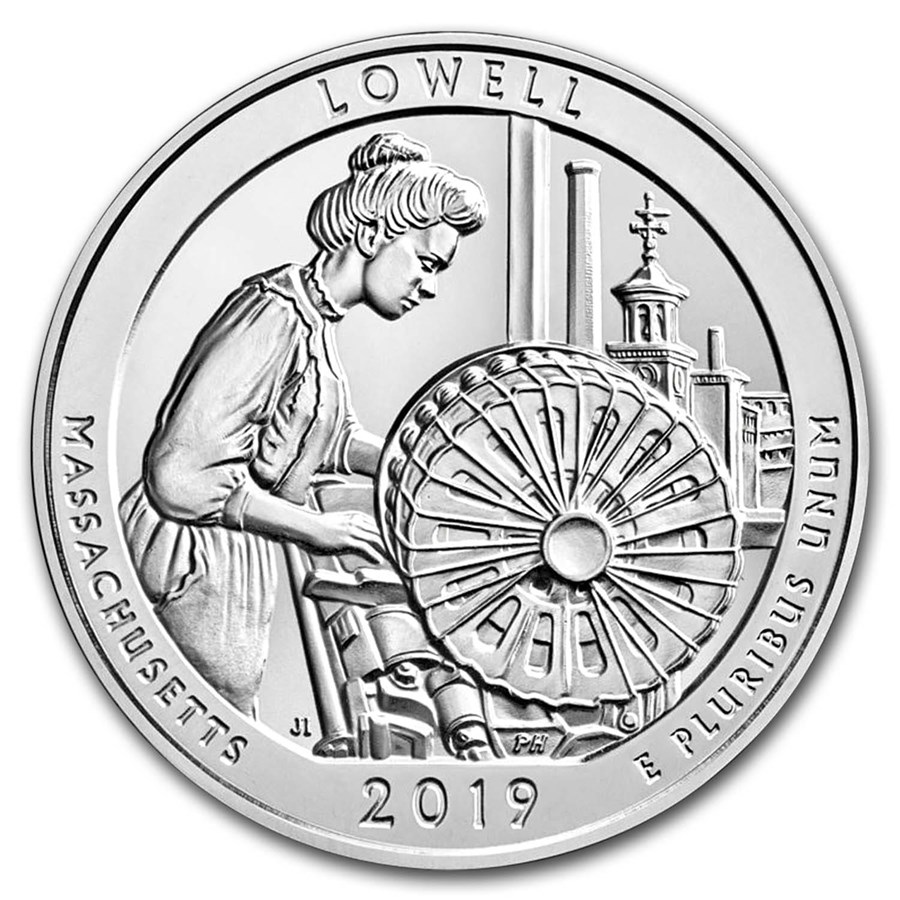 Product Details
Product Details
Lowell National Historical Park was established to preserve the area's textile manufacturing heritage, which played a crucial role in America's Industrial Revolution. This is the first 2019 release in the popular 5 oz Silver America the Beautiful series.

This coin commemorates Lowell National Historical Park in Massachusetts. This is the 46th release of 56 coins. These coins are sought after by investors for their .999 fine Silver content, and demanded by collectors for their artistic value.

Lowell National Historical Park includes a variety of significant sites in the historic mill town of Lowell, Massachusetts. Because of its proximity to the Pawtucket Falls on the Merrimack River, which provided a crucial source of power for local industry, Lowell became the largest industrial center in the U.S. by the middle of the 19th century and is considered the Cradle of the American Industrial Revolution. Industry in Lowell focused on the textile industry, drawing immigrants from Canada, Ireland, and all over continental Europe. After the end of WWII, the textile industry declined, and many of the mills in the area fell into disuse. The Lowell National Historical Park was established in 1978 to preserve this important piece of American history.

The 5 oz Lowell Historical Park coins are part of the 2019 America the Beautiful series. The coins are comprised of 5 troy oz of Silver, which makes them among the highest quality bullion coins issued from the United States Mint. The design of these large investment coins is also used on a series of circulating America the Beautiful Quarters.

This series of bullion coins from the U.S. Mint pays tribute to the National Park System, which was created through legislation by President Theodore Roosevelt, who proclaimed 18 national parks in the latter part of his time in office. Subsequent presidents have continued this tradition through the Antiquities Act. At the program’s peak, there were more than 100 national parks. Forty-nine of them remain open today. ATB Silver bullion coins use the natural wonders of these parks in their designs, with artwork depicting different National Park appearing on the coinage each year.

All coins from the series are struck with the same design on the obverse, depicting George Washington in an updated version of the portrait rendered by John Flanagan for the 1932 Washington Quarter. Inscriptions surrounding the picture include “United States of America,” “Liberty” and “In God We Trust.”

Jack Kerouac described the National Historical Park pictured on the 2019 Lowell 5 oz Silver coins in several of his writings.

Lowell National Historical Park is located in Lowell, Massachusetts. Popular with travelers from all over the United States, it was established in 1978. Made up of several different sites in and around the city of Lowell related to the era of textile manufacturing in the town during the Industrial Revolution, it is operated by the National Park Service. Because of the beauty and historical relevance of Lower National Historical Park, it was chosen as one of the motifs for the 2019 5 oz Silver coin series.

First settled the 17th century by European immigrants from numerous countries, East Chelmsford, as it was known back then, became a significant production center across the Merrimack River from the early 1820s. The community was later renamed Lowell in honor of the business partner of one of the area's founders. Lowell attracted both immigrants from overseas and migrants from inside New England and Quebec who lived at the dormitories and worked at the mills. The textile business in New England declined after World War II, and from the 1960s onward, a lot of Lowell's textile mill buildings were vacated. Through the hard work and promotion of many local citizens and organizations, the National Park was established to honor the unique history of the area.

These beautiful coins are exceedingly popular among American investors and collectors. Silver America the Beautiful coins are fully guaranteed by the United States of America under strict quality guidelines initially issued by Congress. This promise of quality provides a level of security in your investment you will not always find elsewhere. Like many other respected bullion pieces, these 2019 Silver coins meet exact specifications for .999 fineness. Because the U.S. Mint is respected across the globe, you can rest assured that these coins are a secure investment.

A Good Price and A Good Coin