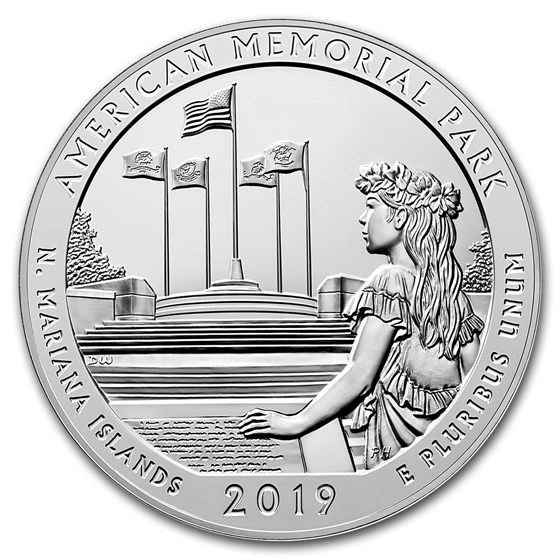 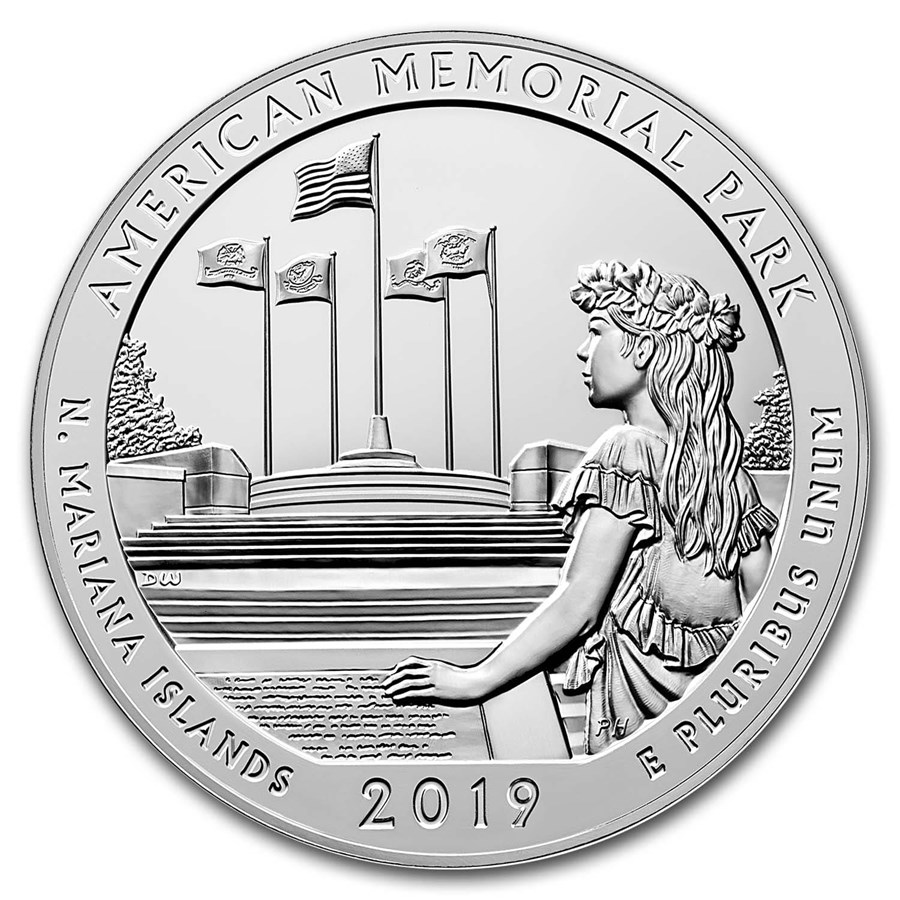 Product Details
Product Details
American Memorial Park on the island of Saipan in the Northern Marianas serves as a memorial to those who lost their lives in the Marianas Campaign in the summer of 1944, a pivotal battle which gave the Allies a key strategic foothold against Japan.

The 5 oz Silver American Memorial Park coins, part of the America the Beautiful series, are only issued for one year, corresponding to the same year the matching, circulated quarter design is also struck. The coins can only be sold by the U.S. Mint's network of licensed bullion dealers, ensuring anyone who purchases an American Memorial Park coin from an authorized dealer is getting one of the most impressive coins made.

All coins from the ATB series have an obverse depicting George Washington in a rendering made by John Flanagan for the 1932 Washington Quarter. The 2019 America the Beautiful series offers five different designs on the reverse, each paying homage to a national park or historic site. The reverse of this unique coin features the natural beauty of the American Memorial Park, located in the Northern Mariana Islands.

The American Memorial Park ATB Silver coins are sure to be one of the most-talked-about United States Mint bullion products released this year. Like the other four designs chosen for 2019, each celebrates essential locations in the history of the United States that have been memorialized as National Parks. The National Park System was created through legislation initiated by President Theodore Roosevelt. Through an act of Congress, Roosevelt was allowed to protect and highlight several historic sites and natural landmarks.

This tradition of preservation is perfect for inclusion on a series of collectible, investment quality coins. While each American Memorial Park coin has a face value of a quarter dollar, the 5 oz of Silver contained within is worth a great deal more. Those who have traveled to American Memorial Park are sure to enjoy the graceful imagery used on the reverse.

A coining press from Germany was installed at the Philadelphia Mint in March 2010, which is used to strike the America the Beautiful Silver Bullion coin series. The press supplies around 1,000 metric tons of pressure and can produce more than 1 million coins per year. This impressive machine is one of the reasons the imagery depicted on the American Memorial Park coins is so exquisite.

American Memorial Park on the island of Saipan, Northern Mariana Islands, was established as a living memorial honoring the sacrifices made during the Marianas Campaign of World War II. The park includes baseball diamonds, bicycling tracks, tennis courts and swimming facilities. The park is owned by the Government of the Commonwealth of the Northern Mariana Islands and is handled in collaboration with the United States National Park Service. Recreational facilities, a World War II museum and a flag monument maintain the memory of more than 4,000 United States military personnel and local islanders who perished in June of 1944.

Each of these 5 ounce America the Beautiful coins are struck to an exceedingly high standard. The high collectible value placed upon U.S. Silver coins is noticeably reflected in the finish and beauty of each piece. Silver America the Beautiful coins are authorized by the U.S. government through an act of Congress, so the designs and production standards are highly regulated. This trusted system offers another level of confidence for collectors and investors as to the composition of these investment-grade coins.

Beautiful coin of the American the beautiful collection