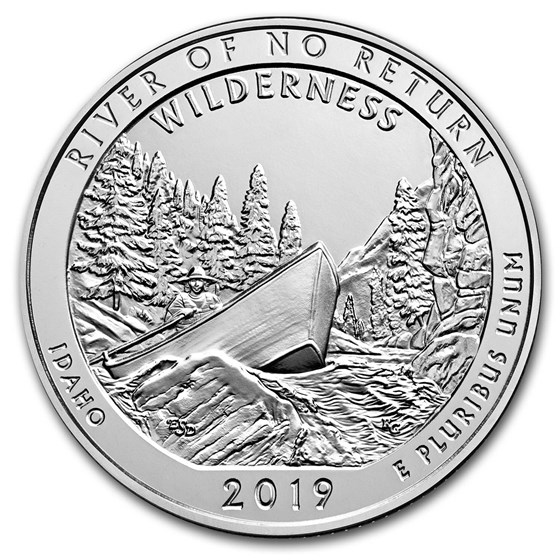 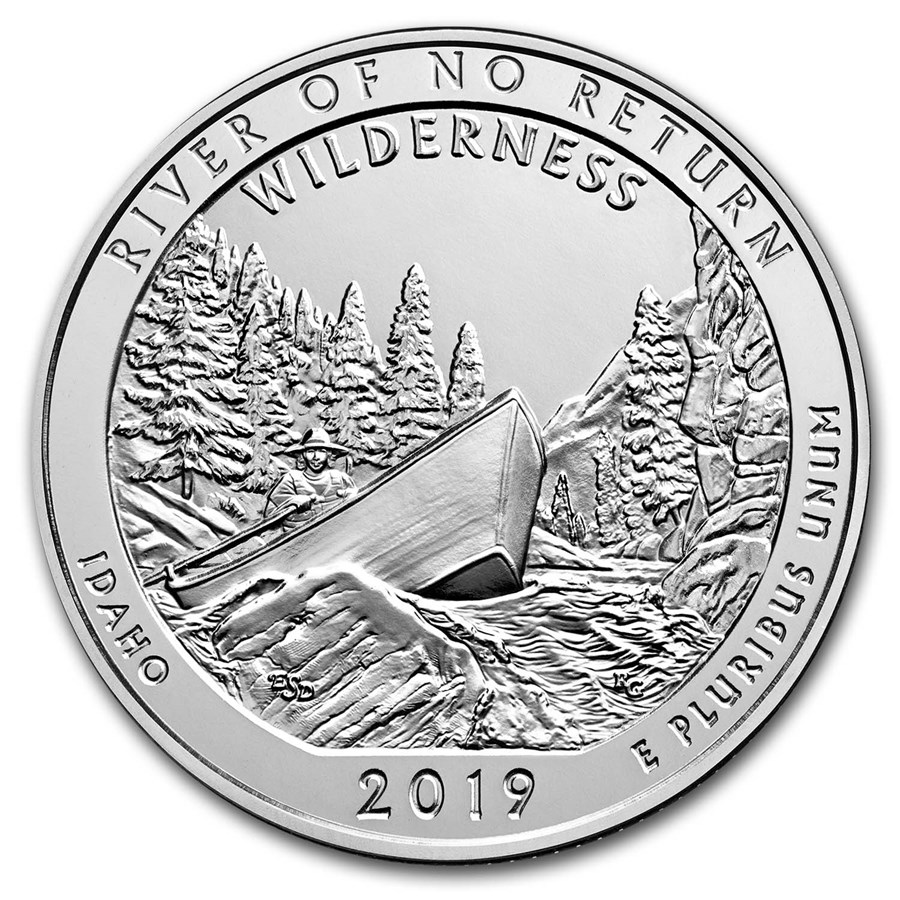 Product Details
Product Details
Frank Church River of No Return Wilderness, Idaho protects wild habitat in the center of the state including parts of the Salmon River. This coin is the fifth release of 2019 in the U.S. Mint's popular 5 oz Silver bullion America the Beautiful series.

This coin commemorates Frank Church River of No Return Wilderness in Idaho. This is the 50th release of 56 coins. These coins are sought after by investors for their .999 fine Silver content, and demanded by collectors for their artistic value.

One of two distinct forms of ATB coins for released each year, the Frank –Church-River of No Return Wilderness 5 oz Silver coins are designed to be a unique way to invest in Precious Metals. A special edition quarter featuring the same artwork was also produced for circulation. The coins are distributed only by dealers authorized through the U.S. Mint, allowing for a sense of security and authenticity. The United States National Park Service approves the coins, which pay tribute to the nation's most beautiful national landmarks.The reverse of the 5 oz Silver Frank –Church-River of No Return Wilderness coin is struck with a new representation of the native wonders found in the area. The park includes sections of the Payette, Challis, Salmon, Boise, Bitterroot and Nez Perce National Forests. The obverse of all 5 oz ATB Silver bullion coins is the same as the corresponding quarter-dollars, with a famous portrait of George Washington, the first President of the United States.

Theodore Roosevelt is recognizable today as one of the four faces on Mount Rushmore. His presence there is because of his tireless efforts to create a National Park System that preserves America's most valuable treasures for future generations to enjoy. The original 18 National Parks established by Roosevelt have grown through the years and 49 operate today.

The National Parks chosen for the 2019 America the Beautiful series were selected based on their splendor and historical significance. Depictions of nature’s treasures add value to these coins above and beyond the price of the Silver bullion. Lovers of the great outdoors and United States history find joy in collecting these coins, preserving them to be enjoyed by future generations of heirs and loved ones.

The wilderness area featured on the 2019 Frank –Church-River of No Return 5 oz Silver coins is home to several species, including bighorn sheep, mule deer and whitetail deer.

A wilderness refuge located in central Idaho, the River of No Return Wilderness Area was designated in 1980. Approved by the United States Congress, it was renamed in 1984 as the Frank –Church-River of No Return Wilderness Area to honor the influential U.S. Senator Frank Church. It is the most significant contiguous wilderness area currently managed by the federal government, except for Alaska. Spanning 2.367 million acres, this National Park includes a number of mountain ranges, many kinds of wildlife and the Salmon River.

Senator Frank Church served as the floor sponsor for 1964’s Wilderness Act. This act provided protections for several million acres of land through the National Wilderness Preservation System. He also introduced the Wild and Scenic Rivers Act in 1968. This legislation called for new protections of the Middle Fork of the Salmon River, asking that they be “preserved in free-flowing condition and that they and their immediate environments shall be protected for the benefit and enjoyment of present and future generations."

America the Beautiful River of No Return Wilderness Coins

America the Beautiful coins are approved by the U.S. government, initiated by an act of Congress to promote safe investing and the natural wonders of North America. From the striking design that highlights an historical landmark to the quality guaranteed by the United States of America, these coins are an investment meant to be enjoyed. Coins can easily be passed down from generation to generation and enjoyed by friends and family alike.

Idaho ATB is in my Top-5 Best Designs of the Series!

Scenes, such as this Swift Boat design, exist all throughout the state that is my home. Haven't been on a vacation since 2004...so now you know why. I have an extra that I use as a paperweight.

This is my favorite coin in my collection. The detail is stunning. While the premium was higher than I would have liked, I am pretty confident that I could get it back if I choose to sell it.

Something cool about a large quarter. The deign of the forest looks great

Another beautiful coin, if you are a invester a collector or an outdoor enthusiast this is for you.I'am very well pleased with this purchase. Thanks Apmex.