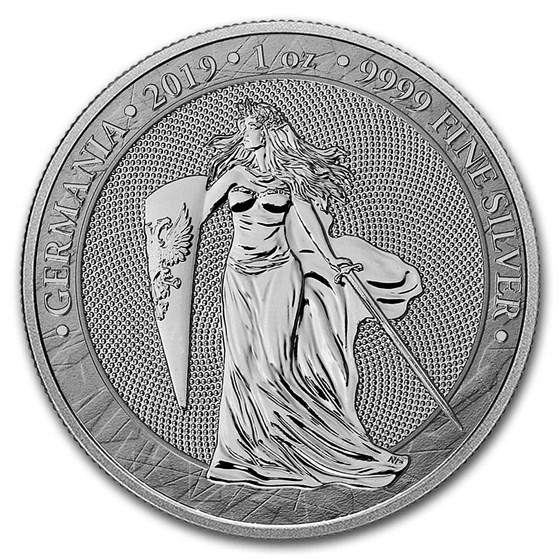 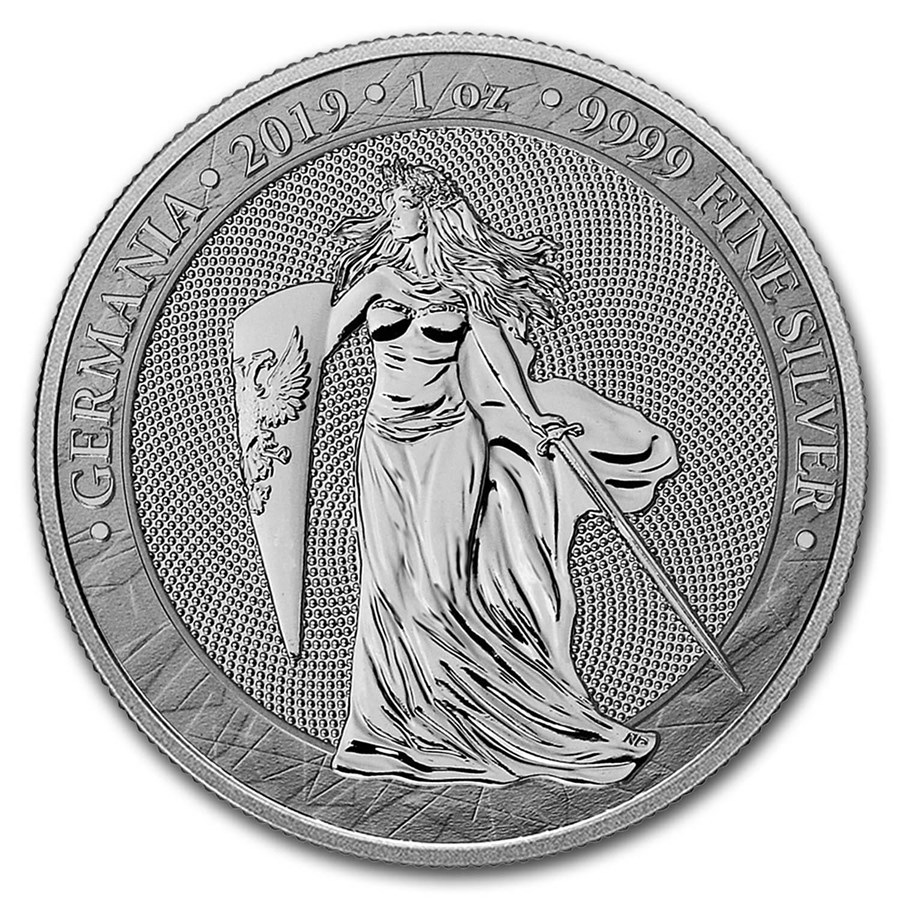 Your purchase will match the quality of the product shown.
Product Details
Product Details
"Germania" is the Latin term for Germany, from which the name "Germany" is used in English language today. The Germania Mint is introducing their brand new and limited bullion series with this beautiful Germania 2019 Silver round.

The Germania Mint features various historical important elements in the design of their first-ever 1 oz Silver bullion round release.

The Bicephalous Eagle (two-headed eagle) is a Roman mythology symbol associated with Janus - the god of all origins, guardian of doors, gates, passages and bridges, the patron of contracts and alliances. Heads facing the opposite direction symbolizing the past and the future.

The Shield Attribute of gods and heroes, symbol of truth, faithfulness and trust. A defensive part of the weaponry used by horse and foot formations from the Bronze Age through antiquity to the Middle Ages. It has accompanied the images of the greatest warriors.

The Laurel Wreath is a symbol and prize for victory in equal fight inseparably associated with success and outstanding achievements. In ancient Greece athletes were honored with it, while the Romans crowned the head of a victorious commander during his martial triumph.

The low mintage is why I bought them

Wish I had bought more as well

Every Germania Mint Coin will be a HOMERUN! The only one over minted & least desired is the Silver Oak Leaf. Also the 2oz is the exact same Diameter as the one Ounce just double as thick. I have 1 Blister Pack of 1 oz and 1 of the 2oz. Plus 5 with COA but no blisterpack. The resale value is AMAZING & it doesn't take long...

When I first saw this come up for pre order last year, I knew this would be a hit. I could only get 2 hands full of them. Wish I could have been allow to buy 500 of these but these were hard to a hold on a lot of sites. Awesome coin. Missed out on pre order of the 2nd one. Hate myself for that. Watch this line for future insurance investments

I was reluctant to order this coin as it was a little pricey. I am not so much of a coin collector but I am glad I purchased this one. It's one of my favorite coins with beautiful artwork. I had to get another one

I was initially hesitant due to the high price over spot, but am very glad that I purchased this coin. The design is both novel and beautiful with the detailed central themes skillfully offset by the fine cross hatching. A very low mintage might mean that this coin will substantially increase in value over time. Will definitely be keeping an eye on this mint in the future.

A truly superior coin in stunning detail with its fine lines, frosted and polished combination with a reeded edge. Even the frosted segments have fine cross hatching. The price is still a little high for my taste but if you like art and precious metals, this one is worth owning.

Just got this coin. The design is remarkable. With a 25k mintage limit, this coin is worth it.

Beautiful lady in an amazing silver round. I love it.

Beautiful new piece. For the price I wish it would have come in a capsule though. This piece is beautiful in hand.