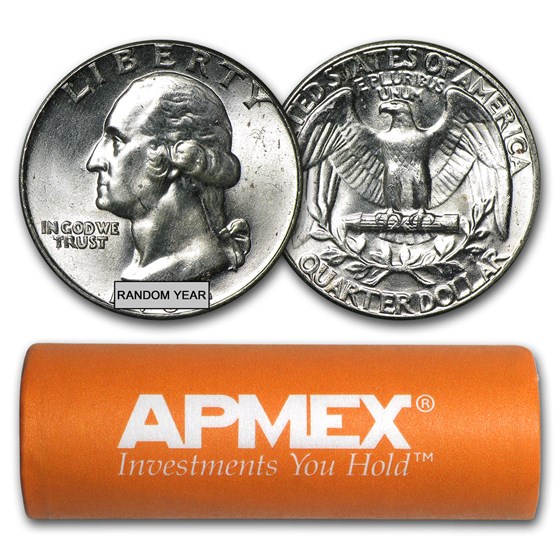 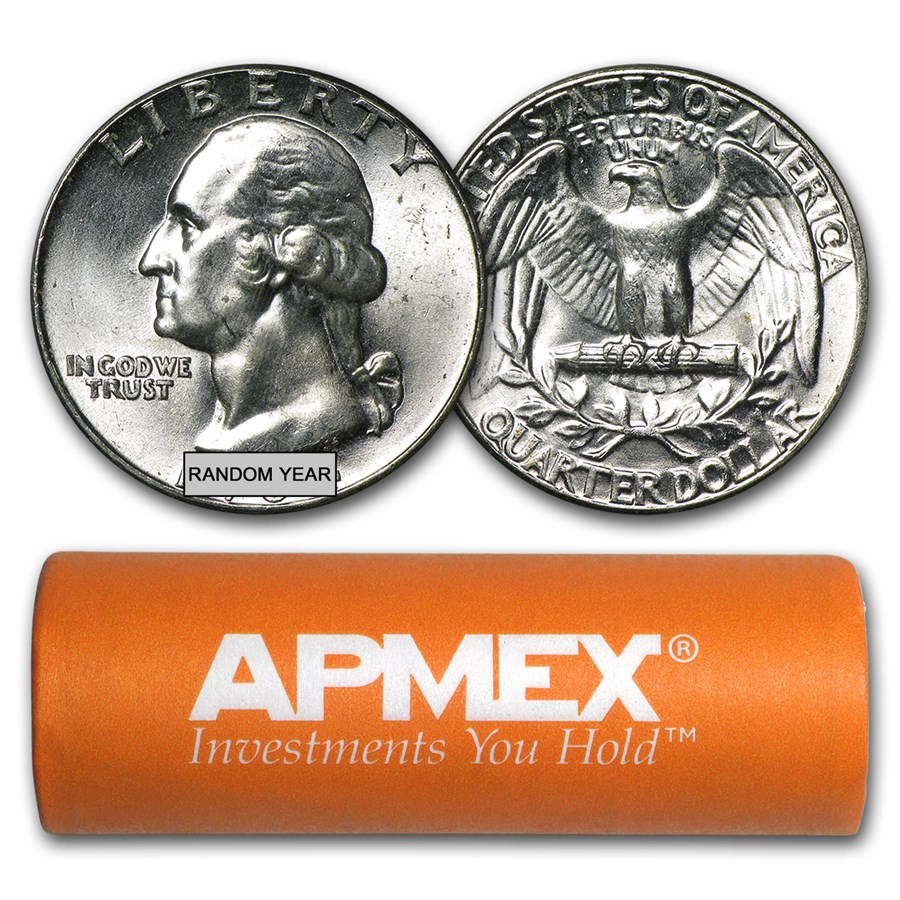 Designed by John Flanagan, the Washington Quarter was released in 1932 to celebrate the bicentennial of George Washington’s birth, and the design is found on quarters to this day. The obverse design features a portrait of the first President of the United States, George Washington. The reverse features an eagle with wings spread, standing on a bundle of arrows with two olive sprays beneath it.

Coins are packaged in a tightly sealed roll.

Quarter Silver coins, such as Silver Washington Quarters, were composed of .900 fine Silver since they were introduced to the market in the 1790s and until 1965 when the Coinage Act of 1965 mandated the use of a Copper-nickel alloy. Before Washington Silver Quarters, the design of the U.S. Silver coins depicted Lady Liberty on the obverse and an eagle on the reverse. In 1932, the U.S. Mint decided to pay tribute to George Washington’s 200th birthday by replacing Lady Liberty with a portrait of George Washington. Often referred to as Junk Silver coins because the coins have no collector value but a higher Silver value than face value, the quarter’s design remained the same until 1999 when the reverse of the coins started to be replaced by designs to honor each of the 50 states.

Junk Silver is a slight misrepresentation of these items. Many of America’s coins circulating before 1965 were made of 90% Silver, or Junk Silver. They are now referred to as Junk Silver because their value is solely based on their metal content instead of collectibility or condition. “Junk” means they are not numismatic, but Junk Silver coins still have value and a place in portfolios.

See what APMEX customers are saying about Washington Quarter Rolls and more.

All coins are dated 1932-1964. Some rolls will be mixed years, and some will be solid-date rolls.

one out of 40 had some black tarnish the rest nice and shiny, will be back

best deal I've made got some rare dates

I have not opened the roll and do not plan to anytime soon. That said I am happy with the end coins and the overall roll compactness and presentation.

Received a BU roll of silver Washington quarters today. Very nice true BU coins. Many from 1963, but 5 from the 1950's. That was a nice treat. Time to place another order.

I'm new to APMEX but so far I'm impressed. These coins are in beautiful condition. Most were 1964D with a few 1963 and was hoping for a little bit more of a variety. I'm happy with what I got and will buy more and see what dates I get with those.

I will be buyng again

Very nice roll, about 75% were 64 D. Couple of real gems were included. Earliest was a 1955. Two coins has some very pretty toning.

All AU or XF

Merchant response: Thank you for your feedback. We are very sorry to hear that these rolls did not meet expectation. Our Post shipment department will follow up with you soon.

Dissapointed, opened the wrapper to count coins and was unhappy

Merchant response: Thank you for your feedback. We are sorry to hear that the Quarters did not meet expectations for BU quality. Our Post Shipment team will contact you soon.

Have not opened since purchase. a nice item to sock away.