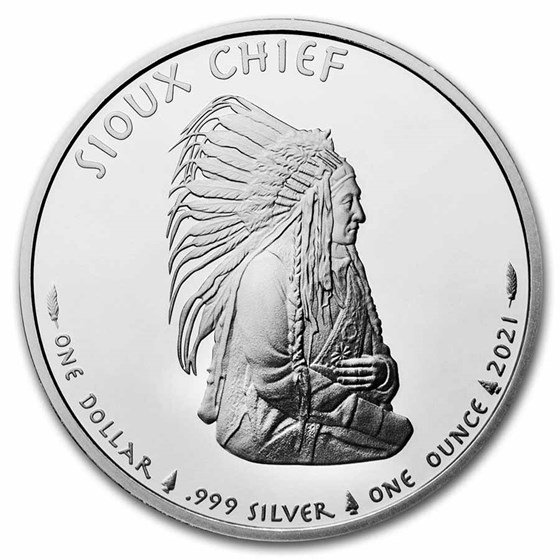 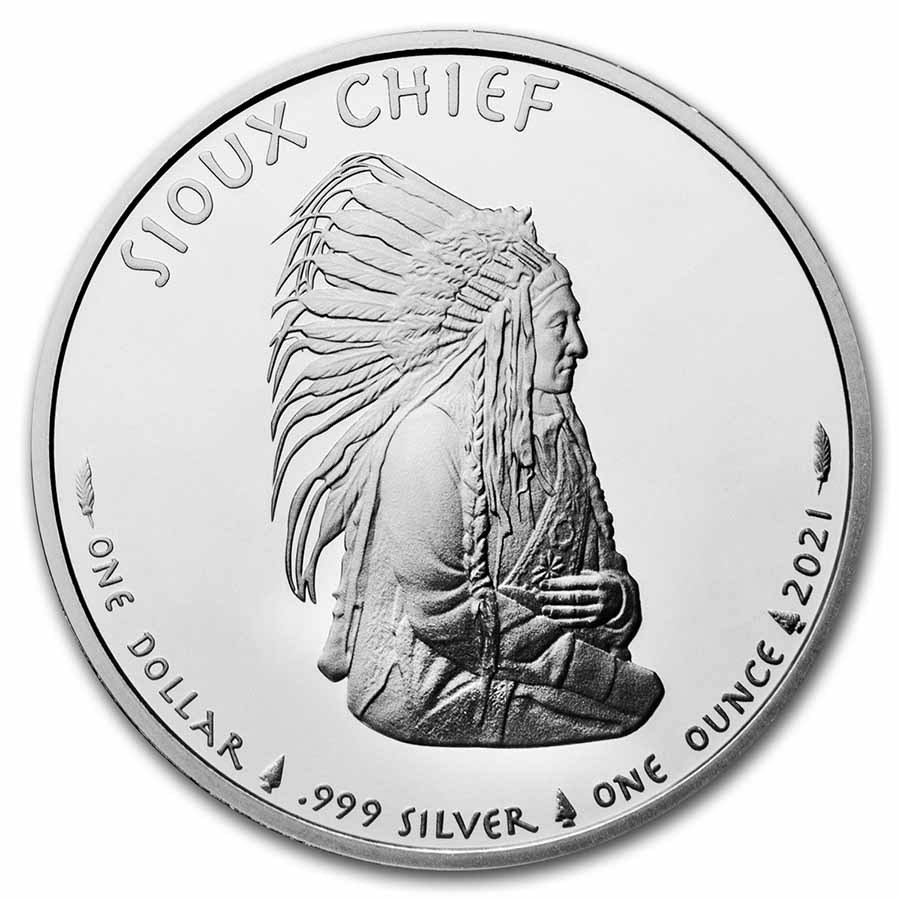 Product Details
Product Details
As low as $7.99 per round over spot
This APMEXclusive® Native American Mint 1 oz Silver bullion coin features a portrait of a Sioux Indian chief. This coin is authorized by the Oglala Sioux Tribe, which is the largest of the Sioux nations and is located at Pine Ridge, South Dakota.

This is the fourth coin in the Sioux Buffalo series. Available only at APMEX, these coins reflect the sovereign status of Native American tribes and are instrumental in honoring tribal history and culture spanning centuries. Adding to their collectibility is the fact that they are the only American, non-U.S. government coins available in the marketplace.

Beautifully display your Sioux Indian coin by adding an attractive presentation box to your order.

Sioux Bullion Series
The Great Sioux Nation consists of groups of Native American tribes and First Nations peoples in North America. The tribes are comprised mostly of the two language groups, the Lakota and Dakota, which means "the allies." The Native American Mint Silver coin series is an APMEXclusive®. Inception of this popular series began in 2015, as it continues to offer exclusive Sioux designs representing the tribes with great dignity and honor while also pairing with top notch quality. This Native American coin series is expected to be an annual release.

Native American Portraits
In the early 1900s, a man named Edward Curtis set out to do the unthinkable – capture portraits of every indigenous tribe in North America. This was no easy task and his incredible photographs came at a great personal cost, but he believed in the people and his work. In 1906, banker and financier J.P. Morgan backed his project and offered to pay him $75,000 over the course of five years to photograph the tribes.

Edward considered documenting this culture to be a race against time, for it would only be a matter of time before these civilizations were destroyed forever. He had to photograph these Native Americans while their traditions still existed, presenting an accurate vision of the land of the people. In his time photographing the Native tribes, he would take more than 40,000 photos. The end result included a 20-volume book set containing over 2,000 photographs, titled "The North American Indian."

Last year I bought the 2020 Sioux Chief and loved it. Just received the 2021 Sioux Chief. Very fine details from the feathered headdress to the creases in the garment. If you have magnifying glass I'm sure you'll see those details much better. I like it. If there's a 2022 version coming, I look forward to seeing it.

This coin is nice but I was a little disappointed by the busy design on the back side and the lack of detail in the chief profile. There seems to be a lot of empty space on one side and not enough on the other side.