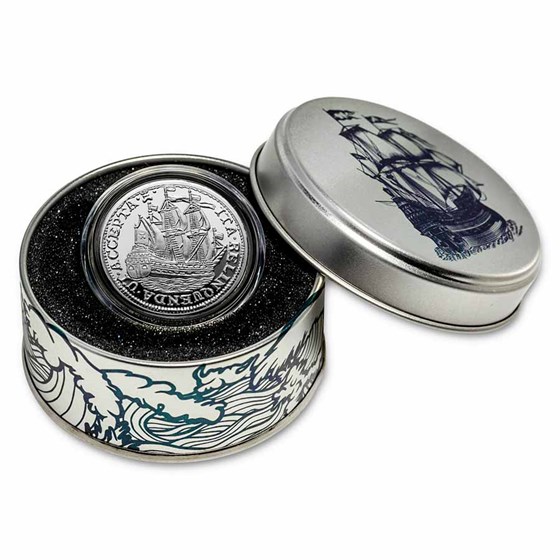 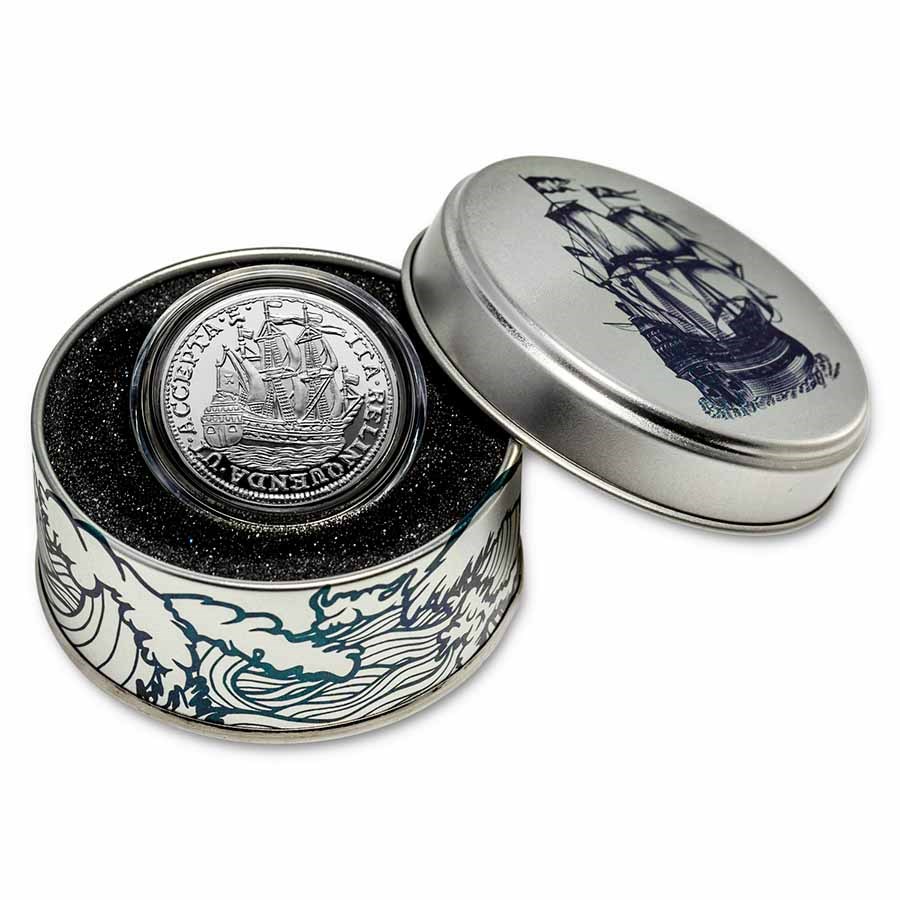 $26.21
As Low As
Product Details
Product Details
The Royal Dutch Mint is proud to present the Official Restrike of an original Utrecht “Scheepjes-Schelling,” or “Ship Shilling,” from 1761. With a limited mintage of only 750 worldwide, this Silver Proof coin is perfect for any World coinage collection.

The “Schelling” is a Dutch coin type which has been around in many varieties since 1670 with the nominal value of six stuivers (5 cent coins). The Ship Shilling was introduced into circulation due to many mediocre pieces circulating previous varieties of the coin. The name of the “Scheepjes-Schelling” is derived from its use in trades, mostly used internationally.

Shield your 1 oz Silver Proof Ship Shilling coins from marks by adding a 12-pack of cotton gloves to your order.

Popular around the world for its metal content and iconic design, add this unique 2022 Netherlands 2 oz Silver Proof Ship Shilling with a special box and Certificate of Authenticity to your cart today!

On September 17, 1806, when The Netherlands was under the rule of King Louis Napoleon, he decided the striking and distribution of coins should be completed by one national body. This was in direct contrast to the Middle Ages practice of large cities having their own mint to produce coins, resulting in various coins circulating throughout the same country, and many levels of influencing bureaucracy.

The original choice was to have the mint in the city of Amsterdam, the capital of the Netherlands, but the city proved to have insufficient finances available. Once that discovery was made, it was then decided to place the National Mint seat in Utrecht.

After Napoleon was defeated in 1813, and the Kingdom of The Netherlands was founded, the mint was renamed and became known as Rijks Munt. A second mint was also established in what is now known as Belgium, a sprawling into a new kingdom at the time. When Belgium achieved its independence in 1839, the Rijks Munt once again became the only mint in the Kingdom of The Netherlands. The years that fall in this time frame gave rise to interesting coins which were officially taken out of circulation in 1849, giving those coins an incredible value today due to their rarity.

When the company was placed under supervision of Ministry of Finance in 1901, it became an official state-owned organization. At the end of German occupation during Second World War in 1944, the coins were produced by United States. Assistance from the U.S. was necessary so The Netherlands could produce enough currency for their people to purchase goods and services after their liberation. In 1994, the Rijks Munt was renamed once again as De Nederlandse Munt NV. The mint became a company with 100% of their shares being owned by the Dutch State. The Queen later awarded the company the prefix Koninklijk (Royal) five years later, and the company was now allowed to call itself De Koninklijke Nederlandse Munt (The Royal Dutch Mint).