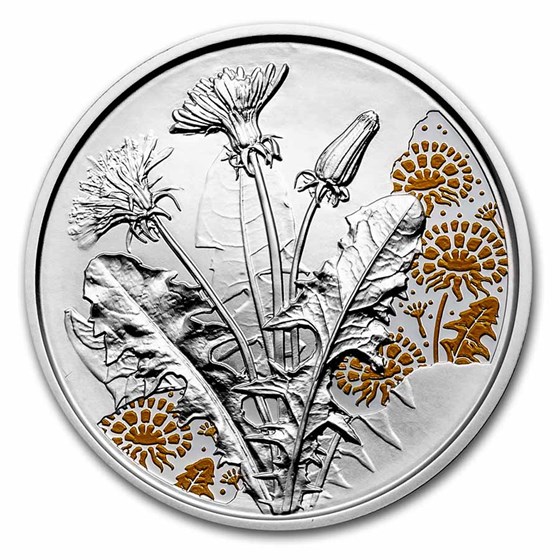 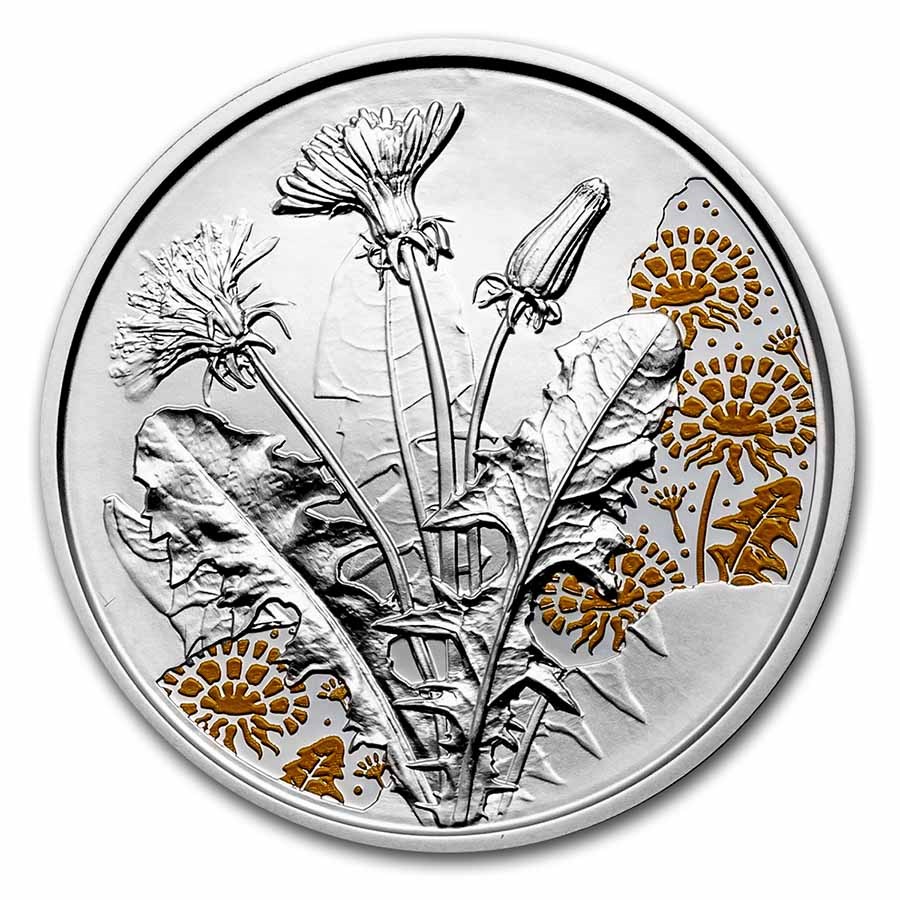 Product Details
Product Details
The dandelion’s golden-yellow flower, serrated leaves and spherical puff of seeds make it instantly recognizable, but not everyone sees the plant in the same way.

This coin is a fantastic addition to anyone whose love language is flowers. Add this 2022 Austria Silver €10 Language of Flowers Dandelion Proof coin to your cart today!

The Dandelion
For many it is just an annoying weed, while for others it is the most underappreciated of plants, which provides an important source of food for birds and insects early in the season. Humans have used the dandelion both as a food stuff and herbal remedy for centuries and many believe it to have mystical and magical qualities, with much of its folklore relating to its ability to answer questions or bring good luck. In the language of flowers, the dandelion represents "a wish come true."

Unlike most other plants, the dandelion accounts for numerous myths and superstitions that are specifically related to its seed head. Some say that wishes made while blowing off the plant’s seeds will be granted, and others believe that you can send a message to a loved one by concentrating on what you would like to convey while blowing the seeds in their direction. Dandelions are linked to perseverance, strength in adversity, clarity of purpose and are thought to impart lion-like courage and bravery even in everyday battles. They are said to represent the qualities of warmth, radiance, illumination, healing, hope, transformation and growth. On top of all that, the dandelion is one of the most joyful signs that winter is over and spring has arrived. So what’s not to love about this resilient little "weed?"

In all major religions, flowers are linked to the miracle of love, which has led to their main symbolic meanings. With its exceptionally beautiful petals, intoxicating scent and the delicacy of its unfurling blooms that suggest lips parting for a kiss, sensuality and fertility, the rose has indeed been an important symbol of love in its many forms for centuries.

Austrian Mint
APMEX is proud to offer products from the Munze Österreich, or Austrian Mint. With more than 800 years of coin-production experience, the Austrian Mint in Vienna has become world-renowned for coin production and Precious Metals processing. As a subsidiary of the Austrian Central Bank, the Austrian Mint's foremost task is to produce all of the circulating euro coinage for Austria. The mint also strikes an impressive range of collector coins and medals, along with producing some of the world's best-selling bullion coins. In addition to the popular Silver Philharmonic coins, the Austrian Mint produces many beautiful commemorative coins to honor people, places and events of its history. More than 400 million coins are produced at the Austrian Mint each year.