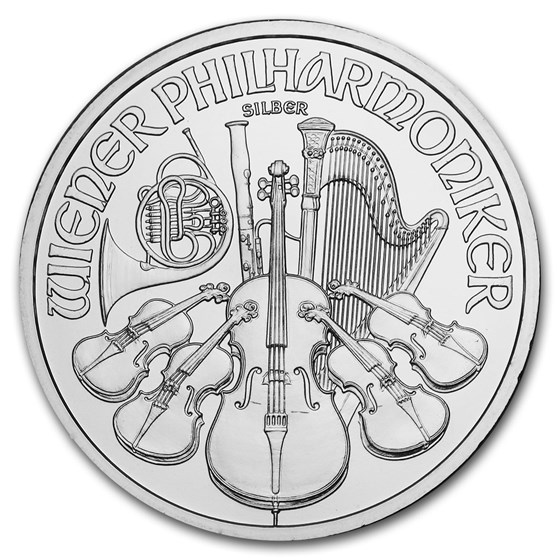 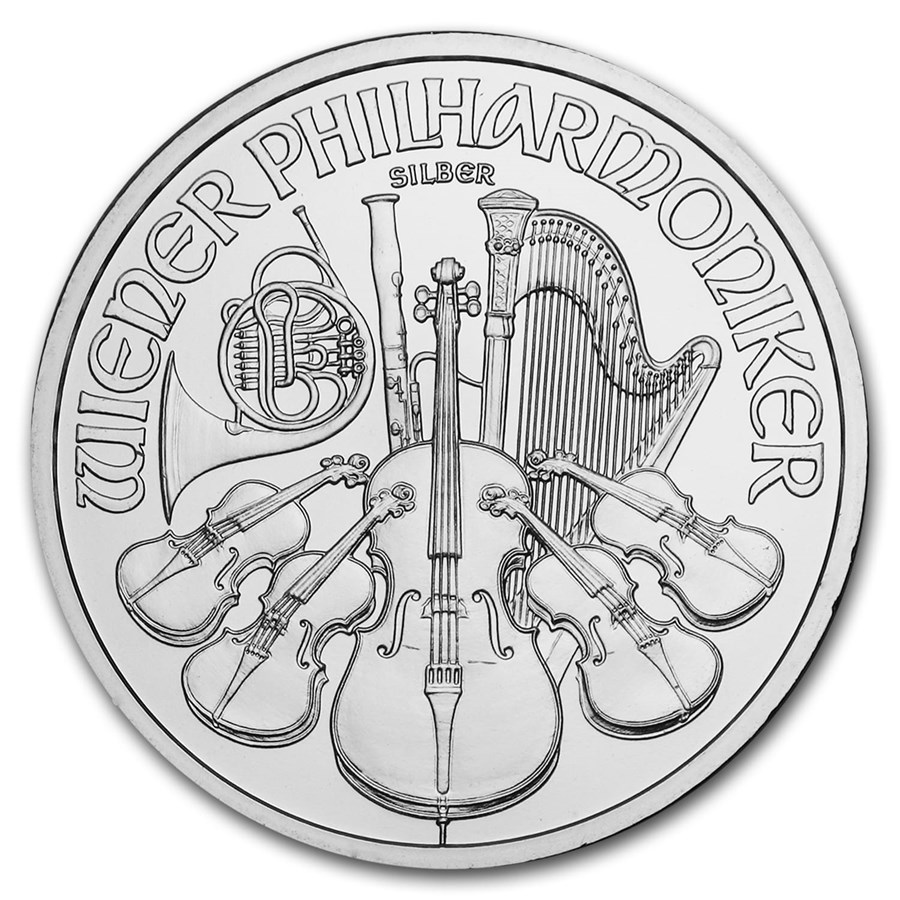 Product Details
Product Details
Any quantity only $7.99 per coin over spot
These 1 oz Silver Austrian Philharmonics feature worldwide popularity with their .999 purity content and classic design of the Musikverein with its array of instruments, including the cello, violin, harp, Vienna horn and bassoon.

Protect your Silver Philharmonic with this clear plastic capsule or display it in style by adding a presentation box to your order.

This stunning Silver bullion coin is loved around the world for its 1 oz metal content and classic, recognizable design. Add the random year 1 oz Silver Austrian Philharmonic to your cart today!

The Silver Philharmonic Coin:
First offered as a Silver Bullion investment option in 2008, this silver coin features the same beautiful design of the Gold, honoring the Vienna Philharmonic and the Great Organ of the Golden Hall. These coins are struck in 1 oz of .999 fine Silver and are also available in tubes of 20 and quantities of 500 in the Austrian Mint's signature red monster box packaging.

The Austrian Philharmonic Series:
Beginning with the Gold Philharmonic first released by the Austrian Mint in 1989, the series was expanded to include the Silver Coin containing 1 oz of .999 fine silver, and then two sizes in .9995 fine Platinum in 2016 & 2018. All releases in the Philharmonic series pay tribute to Vienna Musikverein’s Golden Hall and the various instruments of the Vienna Philharmonic and share a common obverse and reverse design. To mark the anniversary of the Gold Philharmonic in 2004 a 1,000 oz version was created, and for the 20th Anniversary a 20 oz Gold coin was released. Today, several sizes are released in the Gold yearly including 1/25 oz, 1/10 oz, 1/4 oz, 1/2 oz, and 1 oz, in addition to the Silver & Platinum coins.

Dates on these random year coins will be of our choosing and may or may not vary, determined by stock on hand. Larger quantities may contain all one date.

Find Precious Metals charts and the Silver price per ounce today with APMEX.

I picked up three random 2021 Philharmonics! Seriously, they're beautiful, and I figured that would happen. It's OK. No problem. Weight is weight.

APMEX is an excellent company to do business with, the 20 coin rolls of 1 oz silver philharmonics are an affordable way to stack real money. I highly recommend them.

IMO one of the most visually pleasing coins in the world. I now have a tube of 20! Prefer this type of design to a head profile of some human.

I ordered 5 Philharmonics random year and received 5 different years in awesome condition. I am close to filling another tube. Apmex is the go to place for a variety of products keep up the awesome work and thank you to all the staff at Apmex.

All 20 I received were 2013 in an unsealed Austrian Mint roll. Great condition, low premium over spot, exactly as advertised, my favorite design on the silver 1 oz. coins. Fast shipping, all round great purchase, will buy again

Exactly what I ordered, perfect condition...

"Random" years were all 2015. No big deal I care more about the silver itself then the numismatic value. Arrived in good condition

"Random" years were all 2015. No big deal I care more about the silver itself then the numismatic value. Arrived in good condition