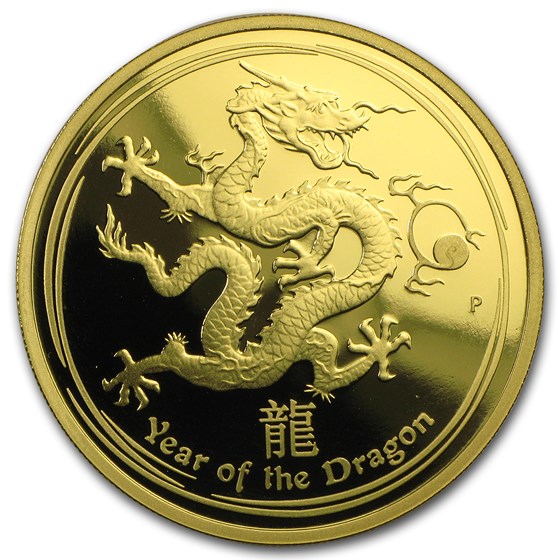 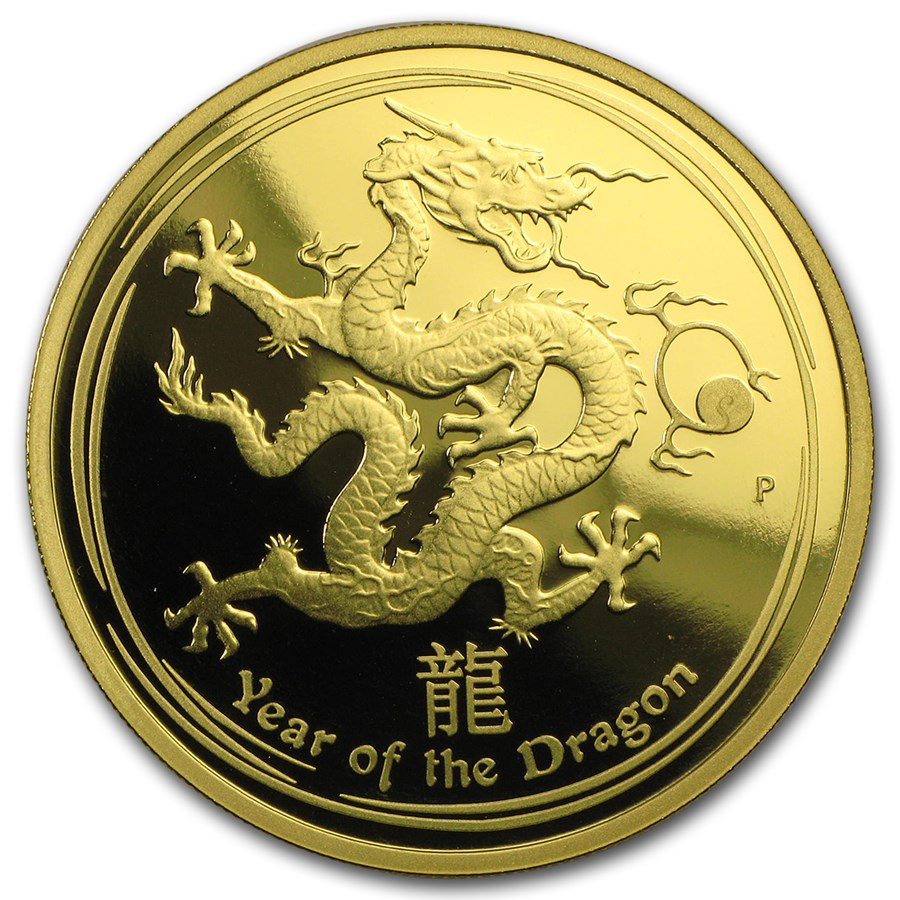 Product Details
Product Details
The 2012 Year of the Dragon 1 oz Gold coins were highly anticipated around the globe. A limited mintage of only 3,000 coins makes them highly desirable!

Coin Highlights:
This coin has a limited mintage making it highly collectible. Add this 1 oz Lunar Year of the Dragon Gold coin to your cart today!

Choose these 2012 Gold Lunar coins and different dragon coins from other series and world mints to build a dragon world coin collection. This 1 oz Gold coin is a perfect companion piece to the dragon coins from the Perth Mint’s Gold and Silver Lunar Series 1 and 2, each featuring a different dragon design. Different Year of the Dragon Gold coin styles are also available at APMEX from other world mints like the Royal Canadian Mint’s Canada Gold holographic dragon coin which will add a stylish twist to your dragon coin collection. In addition to Gold coins, there is also a variety of Silver bullion selections like the 1 oz Silver Maple Leaf with a Lunar Dragon Privy from the Royal Canadian Mint and the 1 oz Silver round from Sunshine Minting honoring the 2012 Year of the Dragon to expand your world dragon coin collection.

These 2012 Gold Lunar coins featuring the image of a dragon make powerful companions to other mythical creature coins from various world mints. This 1 oz Gold coin looks great beside the Perth Mint’s Mythical Creature Series which features other legendary animals like the griffin and the unicorn. The Year of the Dragon Gold coin can also be accompanied by Palau’s Mythical Creatures Silver coin collection with coins depicting vampires and werewolves. In addition, these Gold coins from the Perth Mint can be paired with the New Zealand Mint’s Creatures of Greek Mythology Silver bullion coins which feature images of Cerberus and a centaur.

The dragon represented on this 1 oz Gold Proof Year of the Dragon coin is the only mythical creature of the 12 in the Chinese zodiac.

The 2012 Gold Lunar coins commemorate the Year of the Dragon, the only imaginary animal in the series and one that has been part of Chinese culture for over 6,000 years. This 1 oz Gold coin honors the dragon’s place in the Chinese ancient lunar calendar and is said to give power, strength and luck to those who are born under its symbol. In addition, the Year of the Dragon Gold coin is a tribute to the dragon, one of the four benevolent spirit animals for the Chinese people and a symbol of all things male. The dragon depicted on these Gold coins is also a symbol for nature and the seasons, bringing rain for crops in the spring and descending from the heavens in the fall.

Why invest in 1 oz Gold Lunar Year of the Dragon proof coins?

All variations of the 2012 Gold Lunar coins are highly collectible, but the proof quality and limited mintage of the 1 oz Gold Lunar Year of the Dragon proof coins make the bullion coins perfect additions for even the highest quality proof coin collections. This exclusive 1 oz Gold coin is one of only 3,000 minted by the Perth Mint and comes with a display box and certificate of authenticity. In addition to the Year of the Dragon Gold coin, there are also proof strikings available at APMEX from other lunar series coins and all from similarly limited mintages. Browse other proof-quality Gold coins from other world mints and other series to build a collection of coins of the highest caliber and exceptional finishes.

I was really blown away, by the intricate quality of this coin, it is proof, it is encased, it is gold!! In the year of the 'Dragon', to own is an 'Honor'...

What a great coin. Beautiful and it was my first purchase from APMEX. They are great to deal with and I would definitely buy from them again. The price is great too so don't wait and buy this coin and buy it from APMEX.