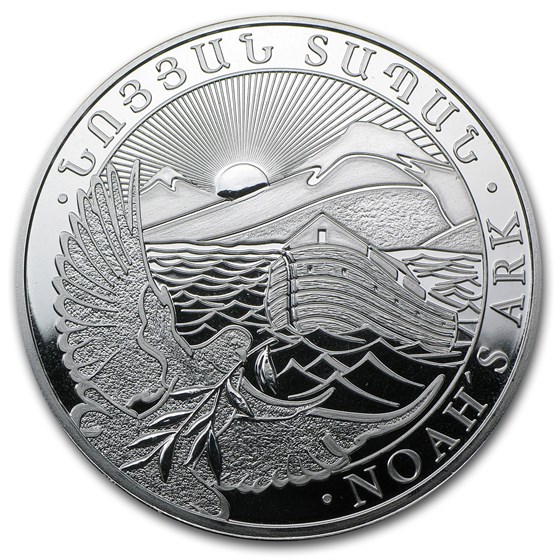 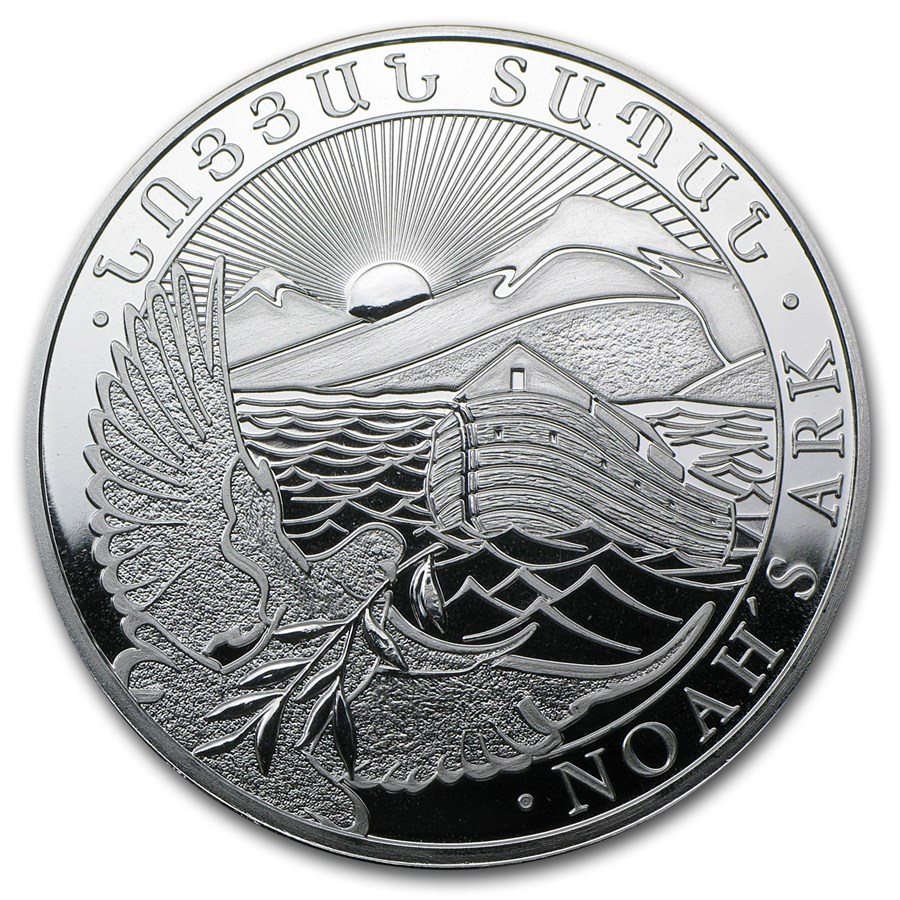 $36.78
As Low As
Product Details
Product Details
The Noah's Ark coin features supreme minting quality and purity produced by one of the most modern private mints of Germany. Each coin is legal tender at its face value and is issued by the Central Bank of Armenia.

The fourth year of issue, these Armenian Noah's Ark Silver Coins embody the beauty of faith and conviction amongst adversity. Transcendent in spiritual and physical beauty, these coins capture this story of tribulation, promise, and of blessing embraced in 1 oz of .999 fine Silver. Each coin tells a story directly connected with Armenia where Noah's Ark is believed to have rested on Mt. Ararat after the flood waters receded.

Silver 1 oz Noah's Ark Coins are great for diversifying your portfolio at a low price, for collecting, and for presenting as a gift. Add this 2014 Armenia 1 oz Silver 500 Drams Noah's Ark coin to your cart today!

Download Silver Coins from Armenia Specifications
The Armenian Silver Noah’s Ark bullion coin is a tribute to Armenia’s connection with the tale of Noah’s Ark. First released in 2011, the Noah’s Ark bullion coin is issued by the Central Bank of Armenia, although it is not produced in the country. Available in a wide variety of sizes including 1/4 oz, 1/2 oz, 1 oz, 5 oz, 10 oz, 1 kilo and 5 kilos, all containing .999 fine Silver, this coin is valued all over the world for its purity, quality and beautiful homage to Noah’s Ark.

One of my favorites.

I'm new at collecting silver, I'm doing it for preparation purposes. got a good price for 20 oz. of silver.

Although the Ark is not in Armenia, I like the design

I got these to "just have". They are beautiful. We are very pleased with the coins.

I bought it for my many nieces and nephews that very young and I hope to show them the different designs on the different coins of the world such as the elephant,koalas, eagles. In hopes they will someday enjoy collecting coins a much as I do.

Coins to have in your hands

I purchased these coins to strengthen my portfolio. Also, I really thought the design was very cool indeed. The coins come in great condition and I would highly recommend these coins to any investor looking to support his or her portfolio. Again, great coins to have and own.

beautiful,one of a kind alot of history

my wife is of armenian descent, and she love,s the coin.

great coin at a good price.

A unique coin to go with other silver coins from around the world. Price was very close to spot and was delivered in 4 days. As always, excellent service from Apmex.