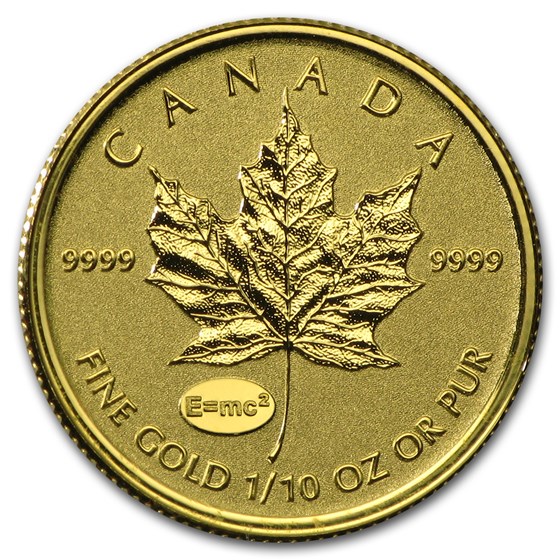 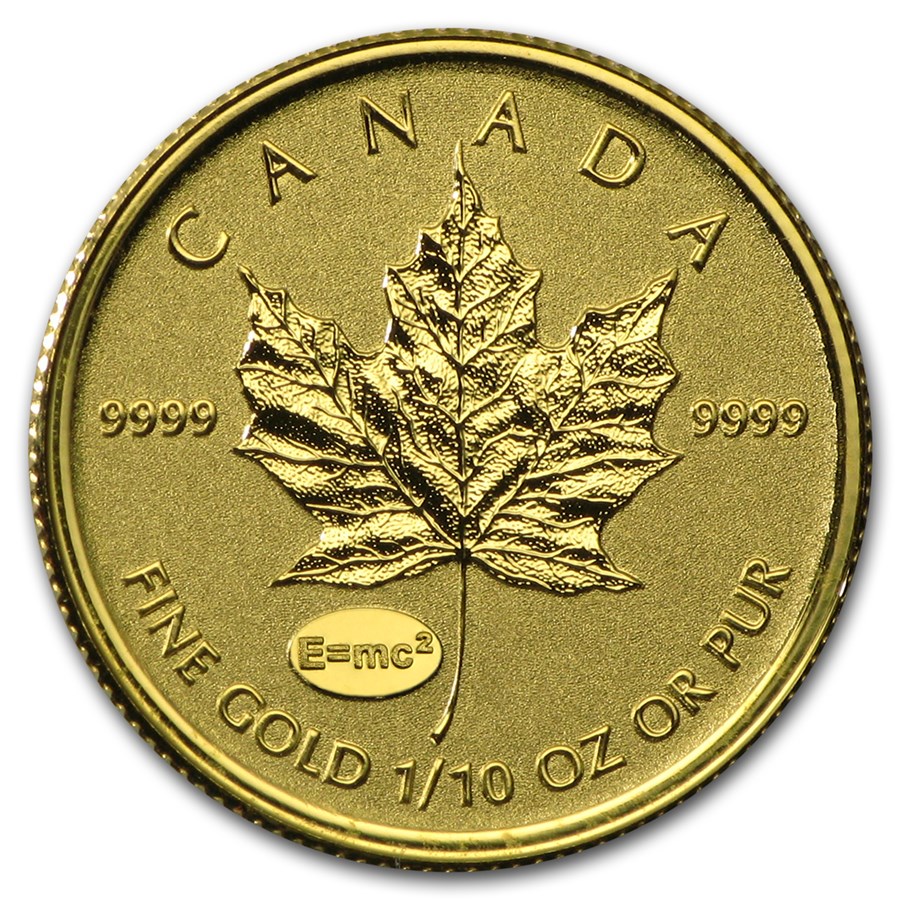 Coin Highlights:
Display your Gold Maple Leaf in style by adding an attractive display or gift box to your order.

Albert Einstein (1879-1955) shattered long-held beliefs and propelled physics and astronomy into completely new directions. He revolutionized the way we understand our world, and 60 years after his death, continues to inspire scientists to trust their creative powers as they push the envelope in scientific thinking.

It was 1915 when Einstein completed his masterpiece, the General Theory of Relativity—cutting-edge ideas on gravity and the motion of large-scale objects like stars, planets and galaxies. An earlier form of Einstein’s iconic formula (E=mc2) had been unveiled ten years prior as part of his Special Theory of Relativity (1905). It described what happens when objects reach the speed of light—a concept that must have seemed pure science fiction 110 years ago!

When the Canada 1 oz Gold Maple Leaf coins were first minted in 1979, they were the only other bullion coin in production in the world apart from the Gold Krugerrand from South Africa; however, because of the economic boycott of South Africa due to apartheid, the Canadian Gold Maple increased in popularity. The design of this Gold coin has remained mostly unchanged but over the years, there have been added security features to ensure the authenticity of the bullion coins.

In 2013, a security feature was introduced into the Canadian Gold Maple Leaf bullion coin to ensure its authenticity: a textured maple leaf, micro-engraved with the year of issue using laser technology that is only visible only under magnification. In 2015, radial lines were added to the coin to make it even more secure and resistant to counterfeiting. Additionally, every line pattern is unique to each coin and creates a specific light-diffracting pattern, adding to the beauty of this classic Gold bullion coin.

In 1908, Canadian Governor General Earl Gray struck the first domestically produced coin at the Royal Canadian Mint. Later, in 1931, the British government transferred the institution solely into Canadian hands, permanently eliminating any involvement from The Crown. The creation of the new Royal Canadian Mint coincided with a Gold boom in British Columbia and the Yukon. To refine the vast amounts of raw Gold being mined, there needed to be a way to treat the Gold without shipping it all the way to the United Kingdom, so in 1911, the Canadian Mint finished its original refinery in Ottawa. Years later in 1982, the Royal Canadian Mint became the first refinery to manufacture .9999 fine Gold bullion coins. In 1999 it became the first mint to ever achieve .99999 fine Gold purity.

Perfect gift for my son the Physicist

I like the RCM products with higher purity than most and nice designs. AMPX delivered in perfect condition as all my orders so far