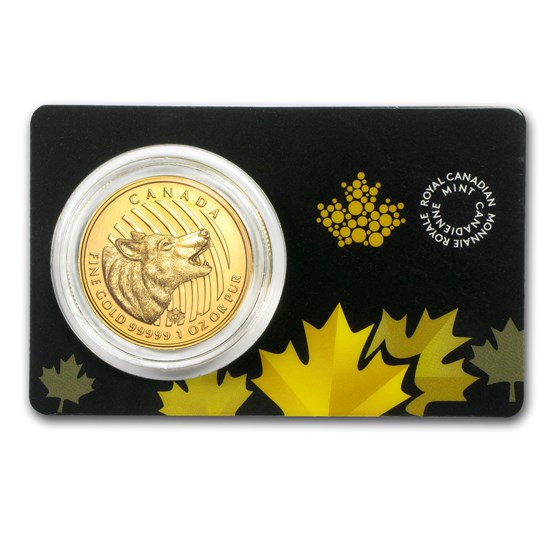 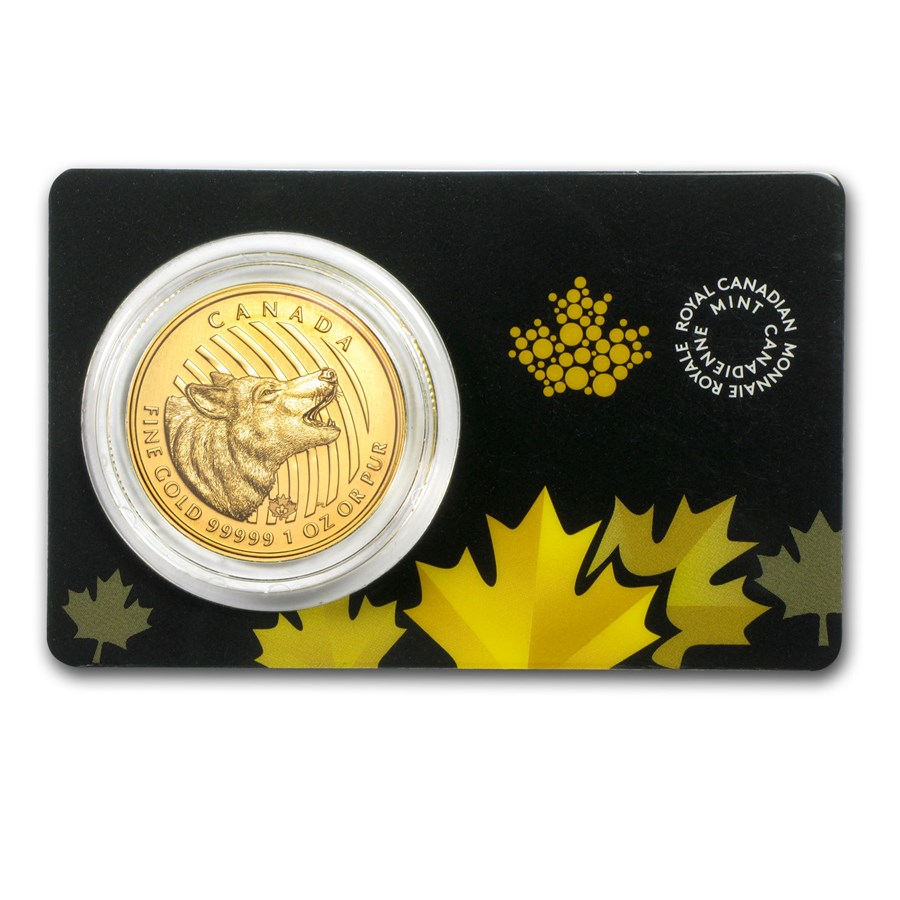 Your purchase will match the quality of the product shown.
Product Details
Product Details
The howling wolf is the first release in the Royal Canadian Mint's Call of the Wild series. These beautiful .99999 fine Gold Maples are highly collectible and have seen appreciation over the years.

These 1 oz Gold .99999 fine coins have been out of circulation for a few years and may have scratched assay cards, but the coin is in mint condition.

Coin Highlights:
About 30% of the world's population of Grey Wolves is currently found in Canada, though the population extends into the United States. Once hunted to near extinction, Grey Wolves have made a remarkable comeback and now this legend lives in Gold. Join the pack and add this symbol of perseverance to your cart today!

A world leader in producing high-quality coins and bars, the Royal Canadian Mint was founded in 1908. They are most admired for their iconic Canadian Maple Leaf coin series but are also responsible for many breathtaking depictions of North America’s natural wonders and wildlife.
Related Searches

So glad this one has becomes available again! Beginning of a series of .9999 gold coins. Awesome!

What is more there to say! The more that can be said about these "THE MOST FABULOUS" sovereign bullion coins on earth, it's not enough. Apart from 1 of a kind .99999 standard, incredibly beautiful wildlife design, low mintage, certificate of assay authenticity, everything about these coins is WORLD CLASS!

I would buy again very happy

I think this item and all the call of the wild series coins are going to go up in value . very collectible items.

I love Canada Howling Wolf coin very much because its design is so attractive , I bought it second time for my collection, naturally I will recommend this to my friends.

So far there are 3 of these coins in this set. I hope they come out with more. I had some extra ones of the cougar that I recently sold and they sold as soon as I put them up. Beautifully designed. A true treasure.

The product is 99999 pure and well struck but the assay card bends/ gets damaged too easily.

I love this series.

Apparently the assay card has value. I bought the cougar first, and was not able to find a wolf until recently. I am pleased that I was able to buy one recently, but without the assay card. Still in the plastic, without the card, the price was $100 less than with the card. What is next for 2016? Grizzly?

I have the wolf and the cougar waiting on the third installment to complete set!!!

The product was in mint condition - excellent service

Mint condition. Excellent brokerage service. Will definitely buy other items in the near future