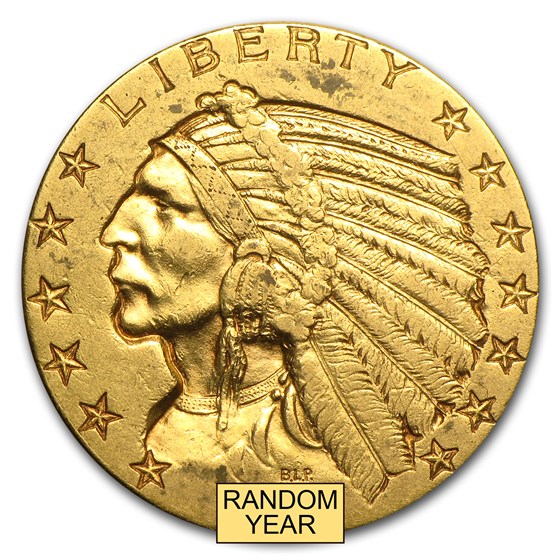 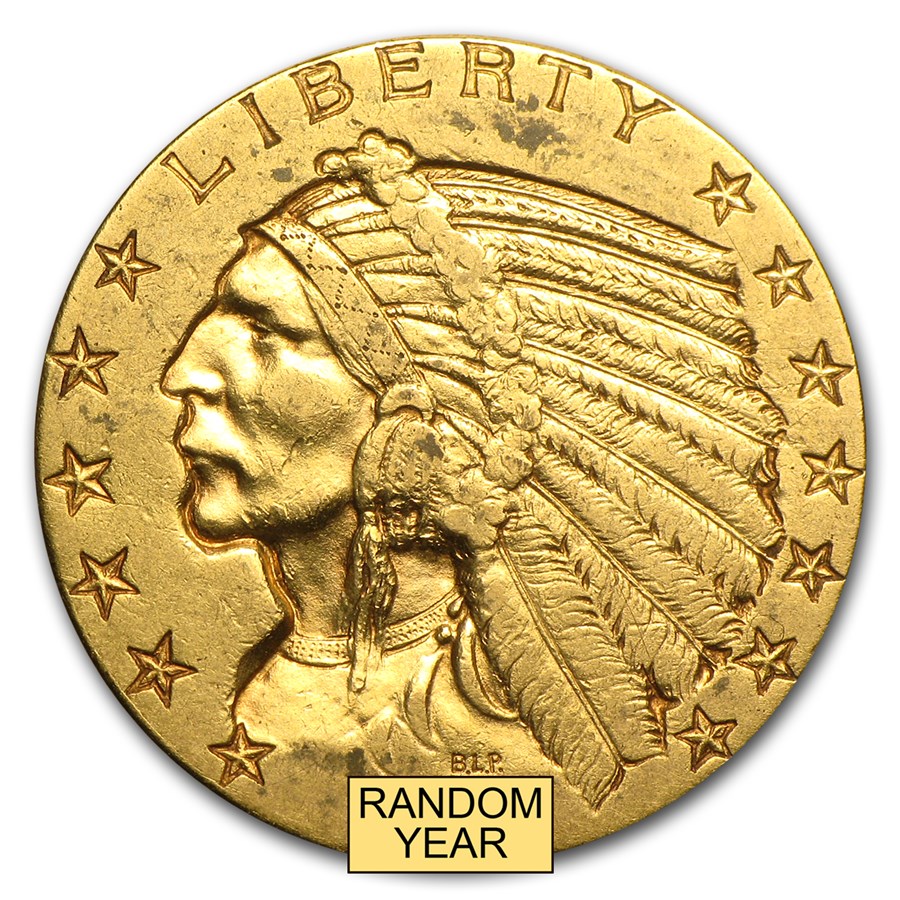 Product Details
Product Details
Recognized as part of the early 20th-century renaissance of American coinage, these beautiful coins are an investor favorite that saw minimal circulation in the U.S. close to a century ago!

Coin Highlights:
Protect your $5 Gold Indian with this clear plastic capsule or display it in a coin bezel as well.

Add this $5 Indian Gold Half Eagle to your cart today!

Dates on these random year Gold coins will be of our choosing and may or may not vary, determined by stock on hand.

Get to know the designer whose collectible Gold Eagle coins were overshadowed by Saint-Gaudens’.

When you think of collectible Gold Eagle coins, the first name that comes to mind is usually Saint-Gaudens, and not surprisingly so. His Double Eagle and Eagle are considered to be not only the most beloved and beautiful U.S. coins, but these Gold coins also rank high among world coins. The designer of the Gold Half Eagle, sculptor Bela Lyon Pratt, however, was also influential in the Renaissance of American coinage. His iconic U.S. Mint Gold coins, the Half Eagle and Quarter Eagle, featured the stunning Indian Head design, but were smaller and more understated. Plus, most Silver and Gold coin designers were working in the shadow of Saint-Gaudens, who had an established reputation and following. Pratt’s Gold coins are considered by some to be more daring and groundbreaking, as his Gold coins were the first to feature a realistic representation of a Native American.

The Gold Half Eagle hiatus: What happened to Gold coins during WWI?

The Gold Half Eagle was minted from 1908 through 1916 and then was halted until its last year in 1929. In the West, Gold coins were circulated, but in the East, banknotes were more common. U.S. Mint Gold coins took a backseat to banknotes in 1913 when the Federal Reserve System was established. Another factor contributing to the disappearance of collectible Gold Eagle coins was economic instability that resulted from WW I, which caused the price of Gold to rise to levels higher than the face value of Gold coins.

The Indian Half Eagle Gold coin, minted 1908-1916 and 1929, was produced in incuse, or inset, seen for the first time on this Indian Head design.

The history of the Gold Half Eagle

The Gold Half Eagle coin, the only U.S. Mint circulating coins with a recessed design, was struck from 1908 to 1916 and then in 1929, as part of President Roosevelt’s mission to update U.S. coinage. The collectible $10 Gold Eagle coins and $20 Double Eagle coins were designed and minted first, but there was a number of complications in their production, so the remaining coins in the Gold Eagle series were produced later. Due to the delay with these smaller denomination Gold coins, Saint-Gaudens did not design them, as he died of cancer in August 1907. Initially, officials thought these U.S. Mint Gold coins would simply duplicate the Gold Eagle and Double Eagle design, but they could not fit inscriptions on the much smaller coins, so a new design, “The Indian Head” was born.

Why invest in the Gold Half Eagle?

This Gold Half Eagle features an incuse, or sunken relief, design, which adds to its collectibility. The design features of these U.S. Mint Gold coins are not the only appeal. These Gold coins had minimal circulation and display the beautiful Indian Head design, part of the early 20th Century renaissance of American coinage. Each of these $5 collectible Gold Half Eagle coins contains .2419 oz of Gold and are packaged in a protective plastic flip. These Gold coins allow collectors to hold Gold and a piece of U.S. history.

I ordered an XF and that is what I received. happy with the purchase.

Nice pre 33 US coins are a good addition for a diversified bullion stash. Two different commons dates in specified condition were recieved promptly for very reasonable expense. Thanks again APMEX??

Posted By:2 to Tango

Merchant response: We appreciate your feedback and are sorry to hear that the XF grade did not quite meet expectations. We will follow up with you soon to discuss a resolution.

Awesome design! but more common 1911 mintage. slightly disappointed in the coins condition, it appears less than XF grade and seems more Average Circulated. I'm not overly concerned. I have been buying my bullion from Apmex since 2012 and this would only be the second time I would have considered myself underwhelmed by a purchase. Thanks Again

I ordered two of these coins and to my surprise, I received the coins in XF/AU condition with original surfaces. Beautiful conditions on a beautiful gold coin!

Hard to fine $5 Indian Gold Half Eagles at APMEX price anywhere else. Grading was accurate.

The coin I received was absolutely stunning! No black spots, no noticeable scratches and lots of luster. Way better then the image shows. A happy camper!

I'm very pleased with the coin.

I'm pleased with the coin. It has a nice design and detail, and will be a nice gift one day for the next generation. I had no problems with shipping.

Wanted a half eagle Indian for years. Very pleased with the condition and value.