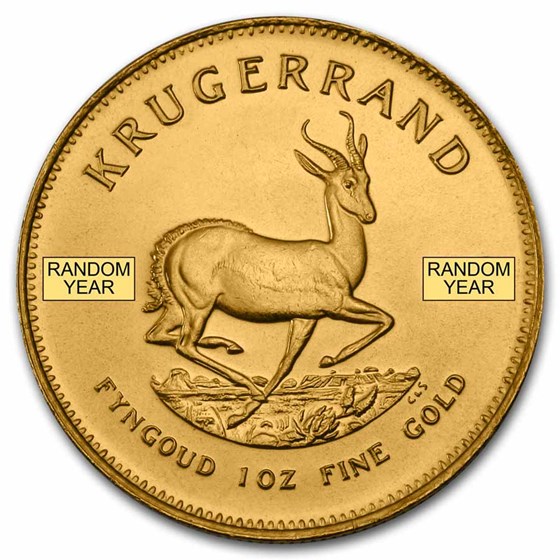 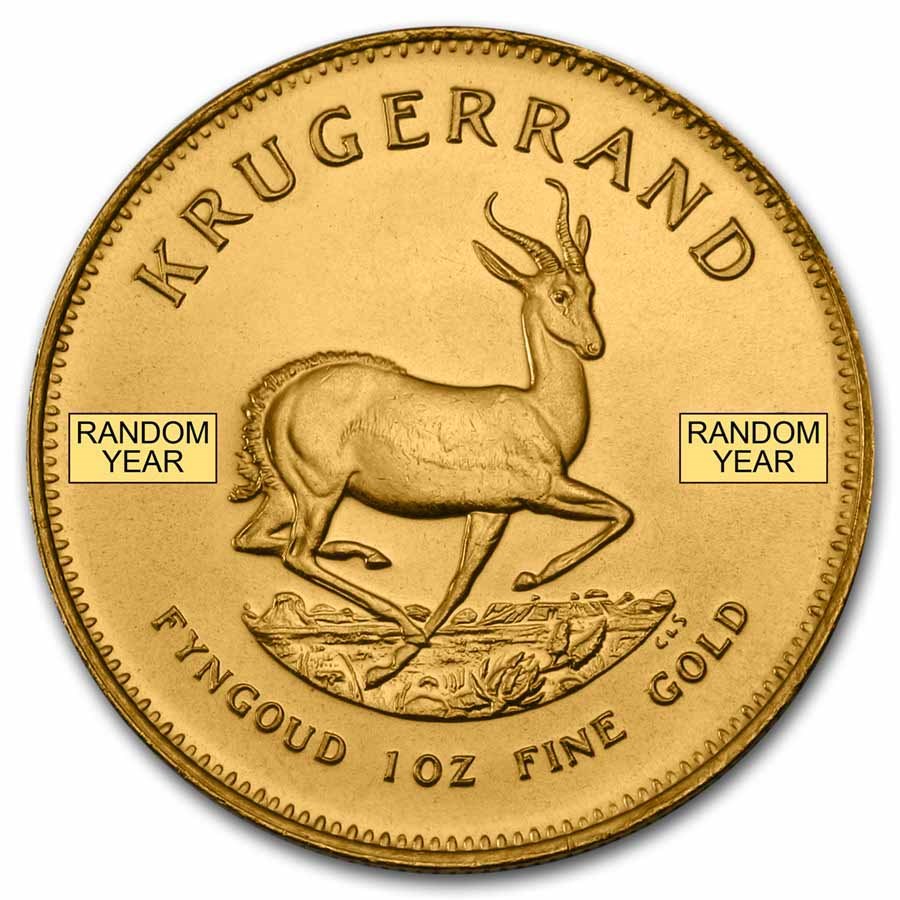 Product Details
Product Details
As low as $89.99 per coin over spot
Since its release in 1967 to help market South African Gold, the Gold Krugerrand has seen worldwide popularity with a simple, classic design depicting two key South African figures: Paul Kruger and the Springbok antelope.


Secure your Gold Krugerrand in a clear plastic capsule or show it off it in a stylish presentation box. You can even add a lovely coin bezel to make your Krugerrand fine jewelry.

This classic Gold bullion coin is beloved worldwide for its fine Gold content and iconic design. Add a 1 oz Gold Krugerrand to your collection today.

Important Note
Dates on these random year coins will be of our choosing and may or may not vary, determined by stock on hand.

Krugerrand Series
The Krugerrand was the world's first modern Gold bullion coin, initially introduced in 1967, and this Gold bullion coin series is still a favorite of collectors and investors today. The Krugerrand were minted to help promote South African Gold to the international markets. Krugerrands were never given a face value but were made to derive their value from the price of Gold at the time they are traded. The Gold Krugerrand is valued around the world due to the highly sought-after design. The coin depicts the South African Republic's first president, Paul Kruger. On the reverse, a springbok, which is the national animal, in addition to the date of minting. On the Krugerrand Gold coin, the springbok seems to be jumping into action, while President Kruger is a reminder of 19th century South African political and military affairs.

Understanding, my Kruger was minted in 1975. That's twenty years before it would have even been allowed to come to the States. I selected "random year" for the premium reduction. There is a noticable dent along the edge. Some patina in the crevices. It is 47 years old, 22k, and it still shines up. I would not have bought this particular coin from a less reputable dealer.

Apmex always have variety of products.

Always a great purchase from APMEX.

Ordered a rando year, got a flawless 2021 coin. Very pleased. The Krugerrand is the granddaddy of the modern bullion coins we know now - and what a coin it is. Flawless strike and finish, easily a match for our Gold Eagles. Do note, if you buy a rando year coin, you get exactly that - and there was a subtle but nonetheless distinct change in the coins around 2000. The older ones are more yellow, vice more of a rose gold color for the current ones (remember they are .9167 gold and the rest an alloy metal, which makes the metal more resistant to damage), and a different font. Both versions are beautifully made, but if you prefer one over the other you’re literally getting dealer’s choice.

Another addition to real money

I bought this the end of May 2019 for my son's college graduation present. I think he got "the bug". He came over for dinner this week and said, "Hey, can I have my old baptism bracelet?" ... And then he weighed it on my gram scale.

Above and beyond expectations !!

The Quality was outstanding, and above what i was expecting! I have purchased silver before with APMEX but this was my first online gold purchase and would not hesitate to purchase gold again through APMEX.

I've been wanting to purchase some gold coins as an investment for awhile, but hadn't pulled the trigger until recently. I plan to purchase at least one coin from each of the major mints, but started with the Krugerrand because it was on sale. I'm not familiar with what BU is supposed to look like, so I can't say with impunity that this coin matches that level, but it's in what I would consider to be excellent condition. APMEX made this transaction very pleasant. I've already placed my second order!

This is a classic gold bullion coin so I wanted to have one. With a low premium, I bought a random year coin from APMEX and hoped for the best, knowing that a lot of the coins out there are 40 years old and may not be in great shape. I was pleasantly surprised to get a 2015 coin that seems to be in great shape. Well packed (really too much packing for just one coin) by APMEX and another smooth transaction. Thanks!

Some flaws noted along the perimeter edge. Mid 1970s. Next purchase will be a current year Maple Leaf with the hope that it is in better shape.