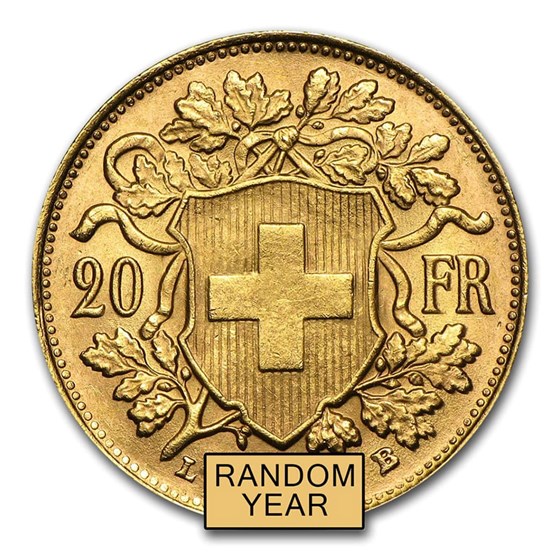 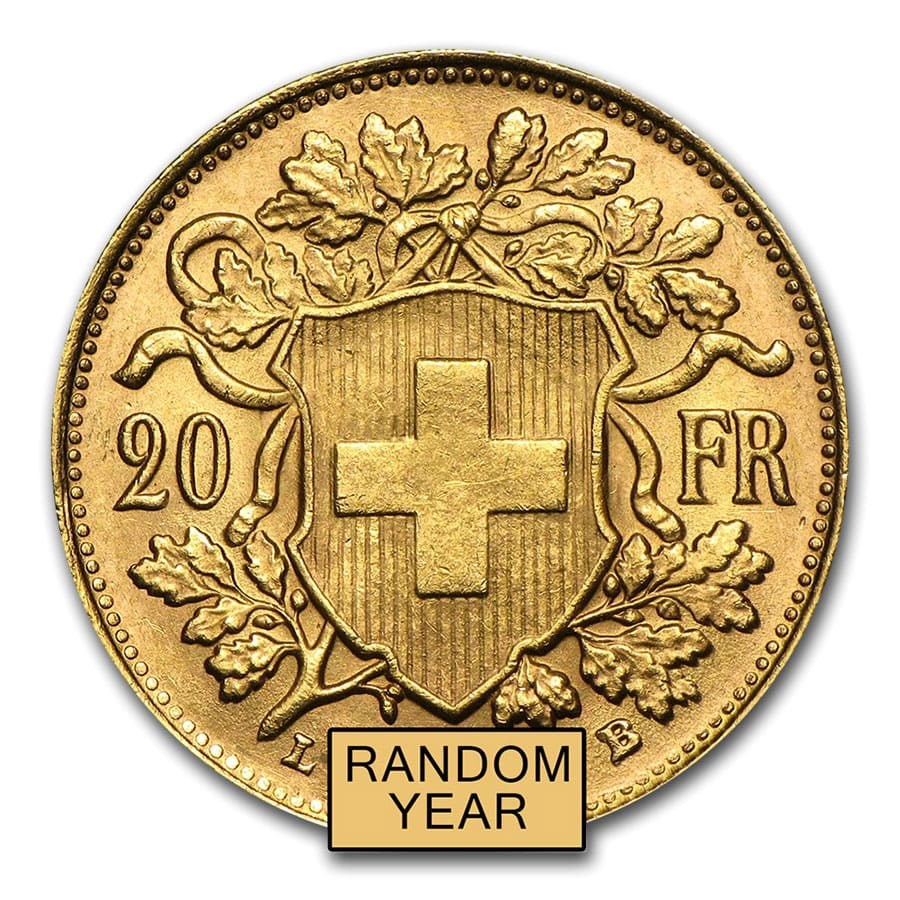 Product Details
Product Details
Swiss Gold 20 Francs are enjoyed throughout Europe as a collector's coin due to their representation of history, having been minted starting in the late 19th century. These fractional Gold coins are attractive to look at with a distinct design.


Protect and display your coin in style by adding attractive capsules recommended for this coin.

The Swiss 20 Franc Helvetia Gold Coin
The 20 Francs Gold Helvetia coin was minted from 1897 through 1949 with a total mintage of 58.6 million coins. Following the formation of the Swiss Confederation in 1848 the Swiss Franc became the officially recognized currency based upon the French Franc. The 20 Franc denomination and metal purities established by Napoleon for 1803 France were followed for its production. The Federal Council of Switzerland decided in 1895 that the 20 Swiss Franc Gold coins should have a new design which has been affectionately referred to as Vreneli and become its informal designation for all Swiss Francs of this design.

European Gold Coins
Minted primarily from the early 1800s to the 1930s, historical European Gold coins were used heavily as currency during the times of their issuance, so specimens surviving in uncirculated or mint state condition today are relatively scarce. Benefits to these rare European coins include, true scarcity, high demand and true historical significance.

Important Information:
Dates will be of our choice and may or may not vary, determined by stock on hand.

Happy with this piece, will be ordering more soon!

Another great coin and service from APMEX.

I got a Lightly circulated AU 1935 LB which is common and was minted after the war in 1945-47. Few small scratches from being with other coins.

Nice Coin, Not Many Date Varieties

Received a 1935 LB (Restrike) and 1949. I'll start off by saying these are in great condition, possibly higher than AU to my eye and they have a great luster. This is the second time buying the Swiss 20 Franc and the second time getting a 1935 which would bring me to my only negative, not many early date varieties. I suppose it makes sense with the number of coins in the later years minted, that would be what you receive. Something early would be nice once in awhile though.

A great gold coin to stack at a great price!!

shipped and in my hands within days very nice ,I was VERY PLEASE ...would and will recommend to friends and family..l

I love this coin! I got a 1907 (looked it up and it was a low mintage year). This is a beautiful coin. Large enough to make out all the details too. Highly doubtful I'll ever go back to buying 1/10 oz gold when I can pick this beauty up! Very happy customer.

A beautiful coin! Couldn't be happier with my purchase!

I have been collecting and investing in many silver coins and bars, as well as a few gold bars and nuggets for some time. However, I had not added any gold coins to my collection. This was the one I chose to be the first, and I couldn't be happier with my choice! A recognizable and widely liked coin among collectors and investors alike. The coin I received is in beautiful condition and was shipped very securely. I will certainly look to APMEX for more gold coins in the future. I'd highly recommend this product to anyone interested in collecting and investing in coins and metals. Thank you!

As of today I have for these now. Honestly I couldn't be happier with them they are amazing. Once again Apmex delivers. These coins are great way to add to your gold portfolio. I plan on buying many more of these.