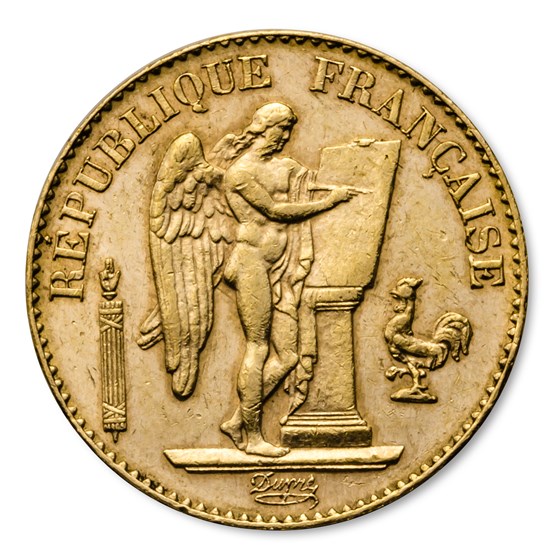 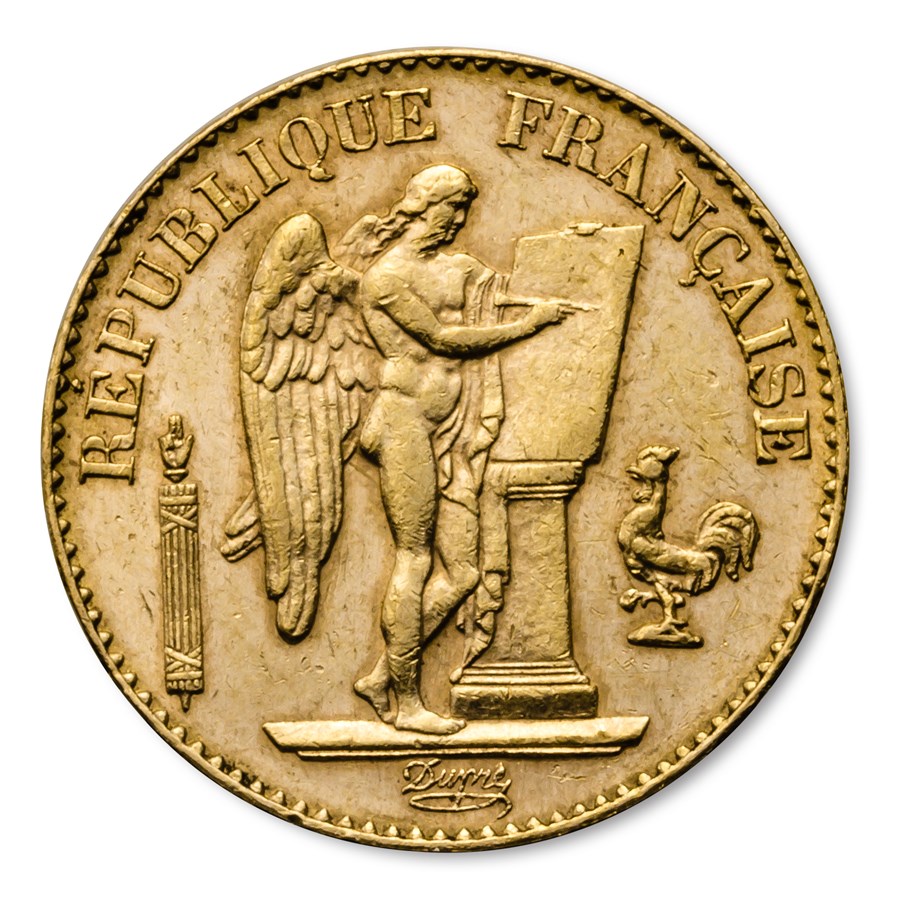 Dates you receive will be of our choosing and may or may not vary, determined by stock on hand.

Collect French Lucky Angel Gold coins and learn about the legend surrounding them.

The legend surrounding these Gold coins began when their designer, Augustin Dupre, was to be executed on the guillotine after losing favor with King Louis XVI. There are several stories about what happened next, however they all boil down to Dupre somehow using the Lucky Angel coin he had with him to escape. Some say he used the world coin to bribe the guard to let him escape, while others say he quickly prayed while rubbing the Gold coin and lightning struck close by, causing enough chaos to halt his execution that day. Either way, these Gold coins earned a reputation as being lucky and became known as Lucky Angels.

Prior to designing these Angel coins and various medals for King Louis XVI, Napoleon Bonaparte, Thomas Jefferson and Benjamin Franklin, Augustin Dupre was employed as an engraver at the royal factory of weapons in 1768. While working at the armory, he gained the patronage of the Spanish ambassador and began studying sculpture, which led to him becoming a leading French medalist, producing medals such as the General Daniel Morgan medal and the Libertas Americana medal. In 1791, a contest to design Gold coins was introduced to reinvent French currency under the rule of King Louis XVI and Dupre was the winner. His designs graced French coins until the introduction of the euro in 2000.

The "lucky angel" design visible on the Gold 20 Francs was first designed by Augustine Dupré in 1792.

The French Lucky Angel Gold coin is an example of the quality Gold bullion produced by the Paris Mint, or Monnaie de Paris, officially founded in 864 under the rule of Charles II. The obverse of the French coin is a replication of Augustin Dupre’s “winged genius” design originally used on the French 24 livre Gold coin in 1793. Created during the French Revolution, these Angel coins also feature the iconic French rooster to symbolize French patriotism, and a bundle of rods, known as fasces, to symbolize authority. The world coins were minted from 1871 until 1898 and these Gold bullion coins are popular among both investors and collectors.

Why invest in the French Lucky Angel Gold coins?

Gold coins have long been considered valuable and these French Lucky Angel Gold coins are no exception. Many buy these French coins as safe-haven investments, as Gold prices typically remain stable or even increase when other investments falter. Angel coins also have added numismatic or collector value, which contributes to their Gold coin price. As vintage sovereign world coins, these Gold coins have far greater value than the basic Gold bar. Other popular sovereign Gold coins that many add to their investment portfolio include American Saint-Gaudens Gold Double Eagles and Austrian Gold Philharmonics.

The religious in me likes angels, and I like coins from the 1800s too so this was perfect for me. I received an 1895 that I'd say is in better than avg circulation condition. I'm new so I wouldn't be able to accurately grade it but I would definitely recommend to a friend. A+ for APMEX!

Very pleased with both coin and service

Once again an Apmex going coin listed as "avg circ" comes in looking more like AU (almost uncirculated). I got an 1877 coin, which together with the "lucky angel" is extra cool. Amazing that Apmex sells a coin that is beautiful and 140+ years old so close to spot. I put it on my digital scale and it came in at exactly 6.45g as it is supposed to. Not even 1/100 of one gram in wear!

Pleased with coin, was offered same coin by another site. I got a lot better value by going to APMEX.COM, I will definitely buy from here again.

Just received 10 of these and as always with Apmex I am very pleased. These are advertised as average circ but the coins received were in the AU-55 to MS-61 grade range. Good mix of dates.

Best coin to get for close to spot price. With the price I'm able to buy at least 1 every other week and they will add up in no time. Great investment!

Love the history behind this coin. Wonderful specimen for an average circ product. Thanks APMEX!

Avg Circ means just that, the coin I received looks like it was pulled out of a vending machine receptacle. Low premiums are reflected in coin quality.