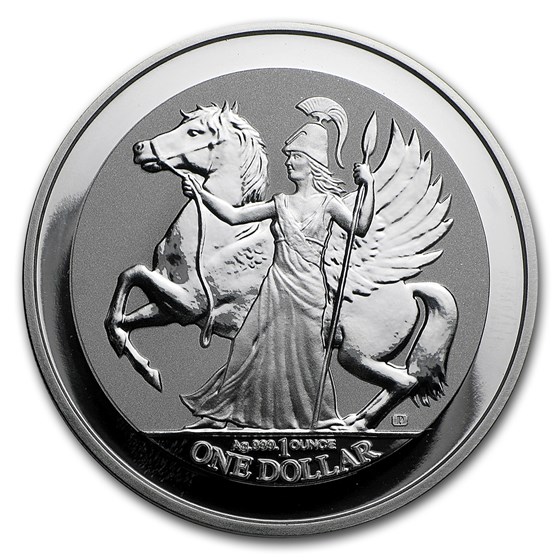 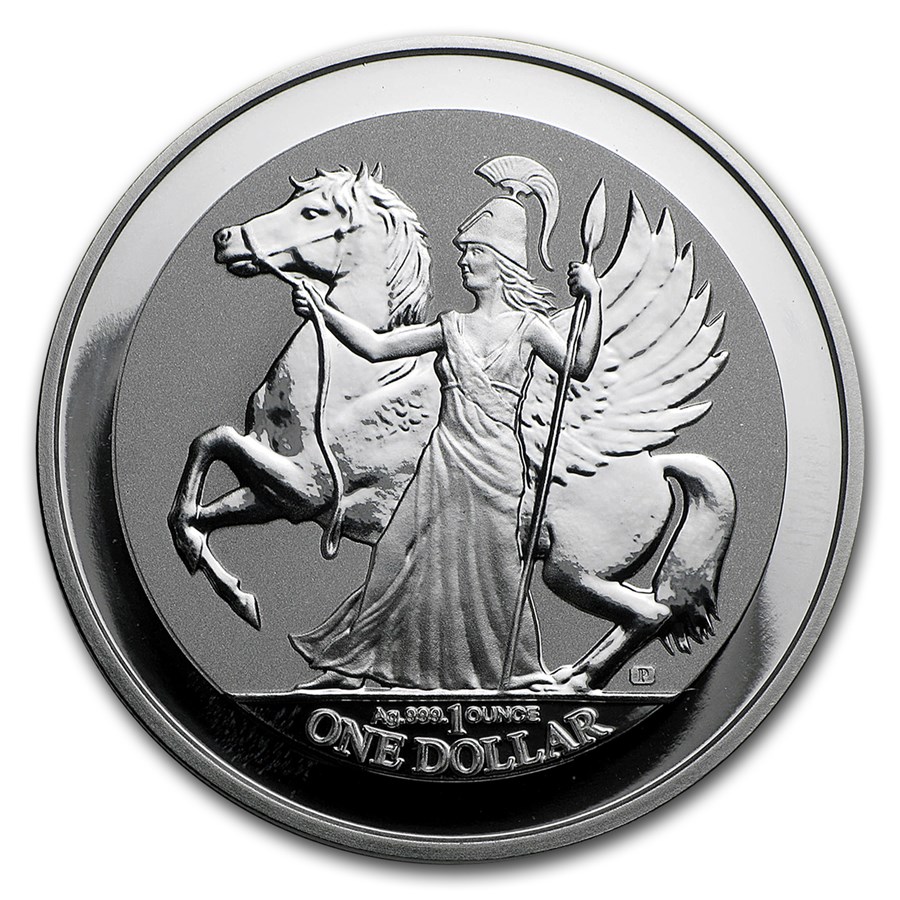 Protect and display your Silver Pegasus Reverse Proof coin in style by adding an attractive display or gift box to your order.

This coin would be a great addition to any coin collection. Own the first bullion coin minted for the British Virgin Islands by adding this stunning 1 oz Silver Pegasus Reverse Proof coin to your cart today!

The story of Pegasus begins when Perseus is sent to kill Medusa, one of the three Gorgons, who had writhing snakes instead of hair. It was said that anyone unfortunate enough to gaze on her face would turn to stone. The God Hermes and the Goddess Athena came to aid Perseus with special gifts, including a shield which Perseus used as a mirror so he did not look directly at Medusa. When Perseus beheaded Medusa it is said that Pegasus was born from the blood of the Gorgon. Pegasus is then tamed by the Goddess Athena, and given to Perseus to aid him on his quest. After Pegasus had helped Perseus rescue Andromeda, he was carried to Mount Helicon where he was entrusted to the care of the Muses.

Another hero, Bellerophon, wanted to capture Pegasus but could not work out how to tame such a magnificent creature. After being advised to sleep in the temple of Athena, Bellerophon saw the goddess before him holding a golden bridle. When he awoke he was alone, but the bridle remained. He ran from the temple and found Pegasus drinking at a spring. Bellerophon put the charmed bridle on the winged horse’s head with little difficulty and, with the bridle in place, Pegasus became gentle and tame and Bellerophon became his master. Pegasus allows Bellerophon to ride him to defeat the Chimera. Later, Bellerophon tries to ride Pegasus to Mount Olympus, but Zeus knocks him off allowing Pegasus to enter alone. Zeus then transforms Pegasus into the constellation Pegasus and places him in the heavens for all to see.

It's a nice designed coin.

Not Bad at all

Mine is OK. Still silver...

Seems like many of other customers have been having the same issue with the black spots on these coins. Both coins had significant and obvious spotting on them. The coins were a replacement for another coin I purchased (and then informed was out of stock) and I was disappointed again. I have never had this problem with APMEX but this is back to back mishaps with their systems.

Merchant response: Thank you for your feedback. Unfortunately, we were led to terminate sale of this product as a result of the poor quality. Our Returns department will contact you soon to further assist.

We buy a lot of collectible silver form Apmex and was really excited about this coin. The design is really nice but for a Reverse Proof, the condition of the coin wasn't was we expected. It looks as if there are chips out of the frosted parts of the coin.

Merchant response: Thank you for your feedback. We are sorry to hear that the condition of the coin did not meet expectation. We will contact you soon to offer a return.

I love this reverse proof of the Pegasus

I bought two of these coins.. one a few months ago which was in very good condition.. ( I'm guess because the coin was still new.. the second one I bought recently was not in very good shape.. the rust spots and marks are very noticeable..

Merchant response: Sorry to hear that the coin was received in subpar condition. We will be glad to replace it for you. Our Returns Dept will contact you shortly.

Very disappointed, I had ordered one of these just "ONE" for my 2017 1 oz silver bullion collection and It was in poor condition with a rust looking spray on the reverse. I had it RETURNED and the second on I received was in worst shape with a huge rust looking spot below the Queens chin.

Merchant response: We are very sorry to hear that the replacement coin also did not meet expectations. Please expect a follow-up from our Customer Service team.

Beautifully Struck Coin!!!! Great addition to my Coins from Around The World !!