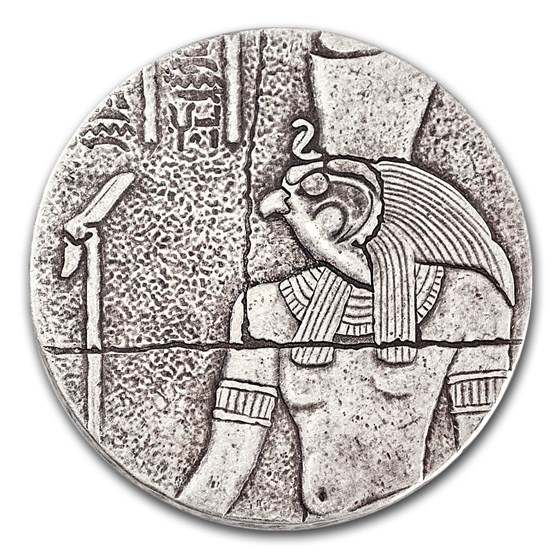 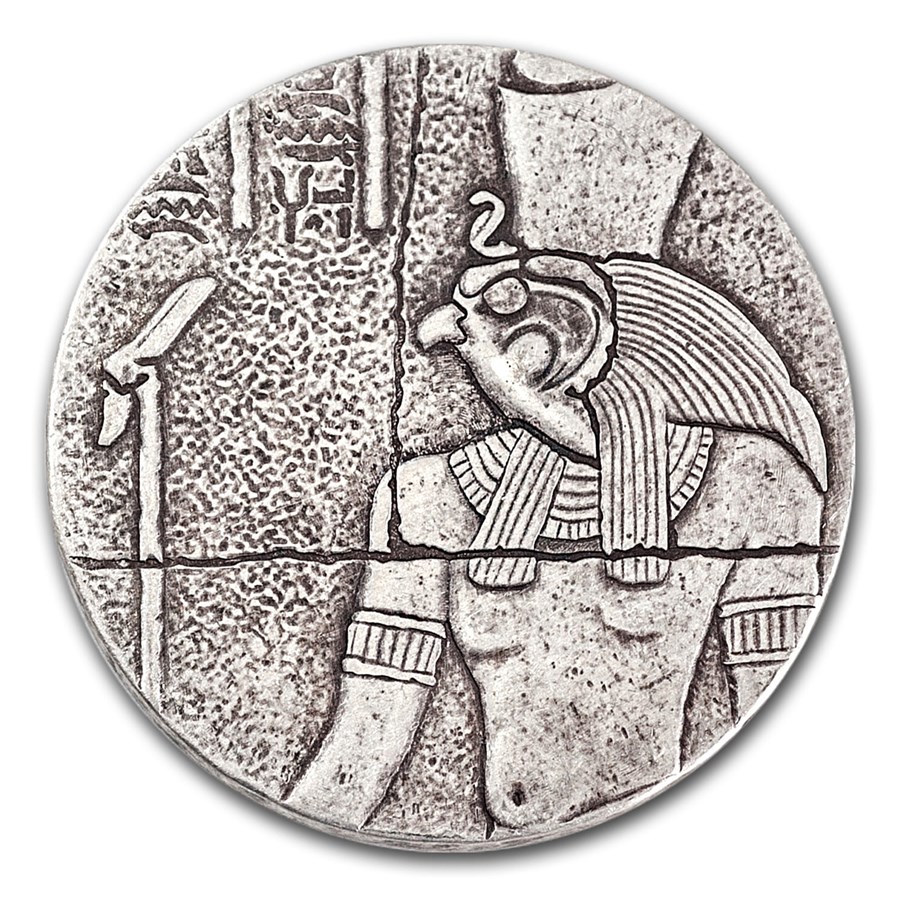 Product Details
Product Details
Only $8.99 per oz over spot
Scottsdale Mint used their high-quality minting techniques and rimless design, on a remarkable 4.75 mm thick coin, to replicate a hand-carved Egyptian relic. Horus is one of the most significant ancient Egyptian deities.

He was worshiped from at least the late prehistoric Egypt until the Ptolemaic Kingdom and Roman Egypt. This 2 oz Silver coin is the 2nd and final release for the 2016 Egyptian Relic series and features a hand-brushed Antique Proof finish and chiseled granite edge to bring Horus to life. The coin has a distinct incuse design and a rough finish, giving it the appearance of an ancient coin in use for thousands of years.

These exceptional Silver coins would be perfect for any collector. Add this 2 oz Egyptian Relic Horus coin to your cart today!

Since Horus was said to be the sky, he was considered to also contain the sun and moon. It became said that the sun was his right eye and the moon his left, and that they traversed the sky when he, a falcon, flew across it. Later, the reason that the moon was not as bright as the sun was explained by a tale, known as The Contendings of Horus and Seth. In this tale, it was said that Set, the patron of Upper Egypt, and Horus, the patron of Lower Egypt, had battled for Egypt brutally, with neither side victorious, until eventually the gods sided with Horus.

As Horus was the ultimate victor he became known as "Horus the Great", but more usually translated "Horus the Elder". In the struggle, Seth had lost a testicle, explaining why the desert, which Seth represented, is infertile. Horus' left eye had also been gouged out, then a new eye was created by part of Khonsu, the moon god, and was replaced.
Only 50,000 of these 2 ounce Silver Horus coins are available worldwide, get yours today online!

Different forms of Horus are recorded in history and these are treated as distinct gods by Egyptologists. These various forms may possibly be different perceptions of the same multi-layered deity in which certain attributes or syncretic relationships are emphasized, not necessarily in opposition but complementary to one another, consistent with how the Ancient Egyptians viewed the multiple facets of reality. He was most often depicted as a falcon, most likely a lanner falcon or peregrine falcon, or as a man with a falcon head.

The earliest recorded form of Horus is the tutelary deity of Nekhen in Upper Egypt, who is the first known national god, specifically related to the king who in time came to be regarded as a manifestation of Horus in life and Osiris in death. The most commonly encountered family relationship describes Horus as the son of Isis and Osiris, and he plays a key role in the Osiris myth as Osiris's heir and the rival to Set, the murderer of Osiris. In another tradition Hathor is regarded as his mother and sometimes as his wife. Horus served many functions, most notably being a god of the sky, war and hunting.

Horus was born to the goddess Isis after she retrieved all the dismembered body parts of her murdered husband Osiris, except his penis, which was thrown into the Nile and eaten by a catfish, or sometimes by a crab, and according to Plutarch's account used her magic powers to resurrect Osiris and fashion a golden phallus to conceive her son (older Egyptian accounts have the penis of Osiris surviving).

Once Isis knew she was pregnant with Horus, she fled to the Nile Delta marshlands to hide from her brother Set, who jealously killed Osiris and who she knew would want to kill their son. There Isis bore a divine son, Horus.

Very nice and interesting. Picture doesn't do it no justice.

I have a collection of Egyptian themed Silver, and this was a beautiful addition to that collection. Hope to purchase the 5oz piece in the future. Nice detail, great depiction of Egyptian art. Very happy with purchase! As always, APMEX delivered fast and as described.

As a government denominated issue with a mintage of only 50,000 and considering the art and quality production of this coin this is an exceptional value.

Another great product from the Scottsdale mint and APMEX. The image of Horus looks like it came right off of a wall from an ancient Egyptian tomb. This 2 ounce silver coin is a great compliment to the 5 ounce King Tut silver coin.

An absolutely beautiful addition to my Egyptian art collection. Looks as if it had been removed directly from the stone.

I love this coin .. am a newbie but this is one of the best looking coins i hav come across

Only reason I gave four stars is the back of the coin doesn't seem to belong with the front design. I still love it and would recommend.