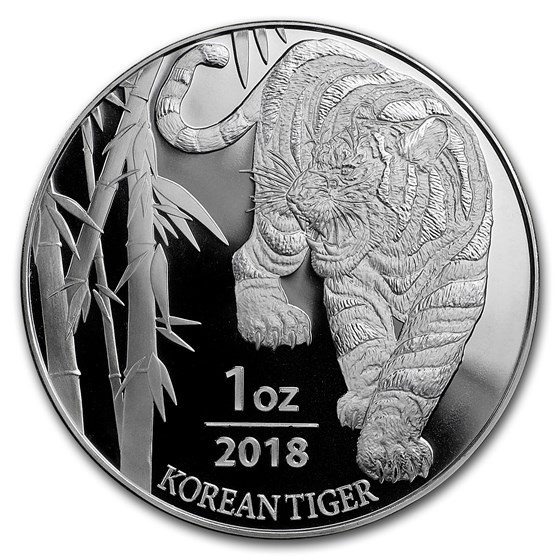 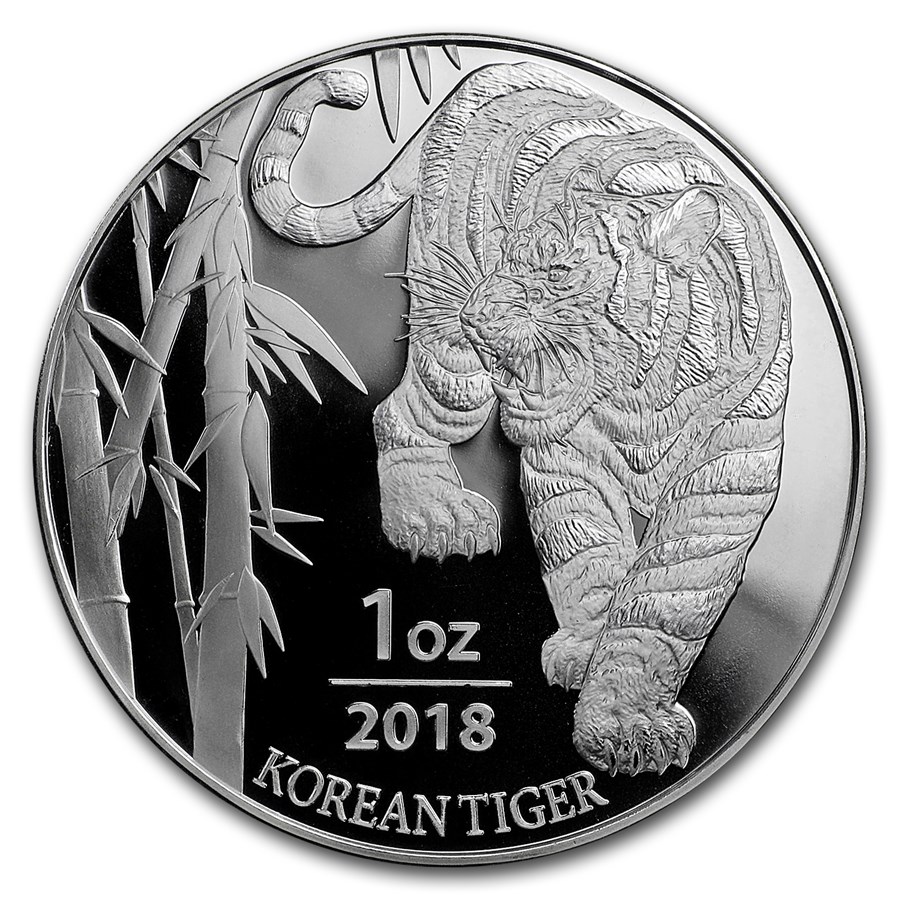 Don't miss the chance of owning the inaugural 1 oz Silver release of Korea's Tiger bullion series. Add one of these Korean Silver Tiger medals to your cart today!

After the Tiger bullion series was launched by KOMSCO in 2016 it was only available in the sizes 1/10 oz, 1/4 oz, 1/2 oz and 1 oz Gold. Now in 2018 the 1 oz Silver Tiger makes its debut with a limited mintage of 30,000, is significantly lower than the highly sought after Chiwoo Cheonwang series.

The tiger has been known as the animal that represents South Korea. There was no better fit than the tiger as the design for the bullion series produced by the official mint of the country. With the increasing demand for low mintage premium Silver bullion, KOMSCO made the decision to extend its range of Tiger bullion medals by the 1 oz Silver in 2018.

With only 30,000 Silver medallions in the world today, the new 2018 South Korean Tiger coin is highly sought after by Precious Metals investors and collectors.

It is a really good looking coin. I bought one and like them so much I am going to get more.

What's not to absolutely love?

These are basically ultra-cameo proofs--absolutely beautiful. They're low mintage, 1st in series, protected in capsules and look amazing. As these sell out and following years with different designs add on just watch the premiums rise on this one. Buy them up!

This is a beautiful depiction of a tiger. He is very majestic.

The moment I saw that Apmex had this coin for sale I knew I had to get it. With a mirror like finish on the front and back really makes the design on both sides pop out , I purchased it mainly because I like the design of the tiger on the front but what really surprised me was the back and have the security feature was well placed and it worked and the country of South Korea is displayed in such a unique way and with the mirror like finish it’s almost like it’s around it in water. Very cool I do recommend for any collector to get at least one of these cones .

This coin could have been soil for 2, or 3 times it's price. Simply list it as a Proof coin. The background is a perfect mirror finish. The tiger jumps off the coin at you. On the back there is the chemical Silver symbol Ag in a circle, at looks like a water mark, or a hologram. Simply dazzling. Only 30K, first coin of a new series, Promises to sell out fast. I only wish i could have rated this coin 6 stars, a must have coin.