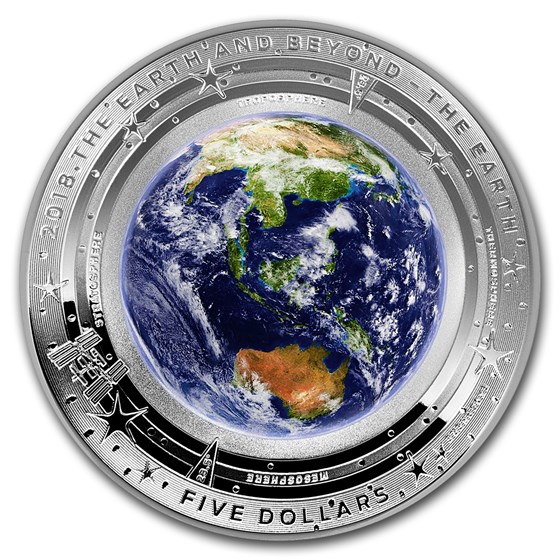 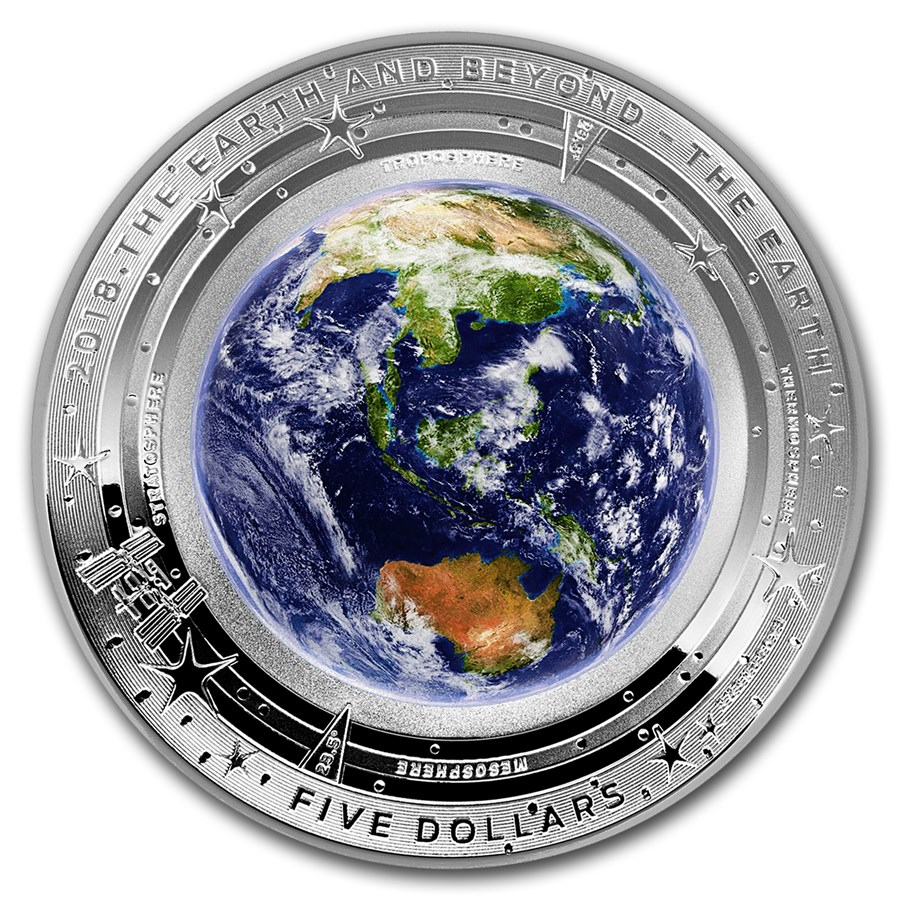 Product Details
Product Details
APMEXclusive® Celebrate our home planet with this enthralling Royal Australian Mint Domed coin featuring the planet Earth. The first in the three-coin The Earth and Beyond series, this .999 fine Silver coin is beautifully colorized.

Coin Highlights:
Following their sold-out series of the Silver Southern Domed coins and Silver Northern Domed coins, the Royal Australian Mint has once again produced a coin enjoyed by all. This is the first coin in the three-coin series, with the second release being the moon domed coin. Add the Silver $5 Australia Colorized Domed The Earth coin to your cart today!

First in The Earth and Beyond Silver Domed coin series features our beloved home planet, the Earth. The beauty of our planet is displayed in a convex shape, giving a realistic look to the coin. Our planet Earth was thought to have formed around 4.54 billion years ago, with the first photograph of the full view of Earth taken on December 7, 1972. That famous photograph, called the "Blue Marble" was taken as the Apollo 17 crew left Earth's orbit for the moon, and shows a captivating view of the Earth.

First let me say, if this coin jumps out at you from photographs, it looks so much better in person. There is a buyers market for coins like these, especially the previous constellation series the Australian mint has come out with. Premiums have only gone up with these coins that I've seen. From personal experience on this particular coin, it has seen at least a fifty percent increase in price when I bought it, and it was not on sale at the time of my purchase. Buy while you can for sure.

This coin is an absolute stunner! The presentation box and coin design will leave you satisfied with your purchase. Overall very happy with this coin.

First of New Series from ROYAL AUSTRALIAN MINT. Limited 5,000. Supreme quality and interesting design. Has a strong market anticipation of what's to follow. To me it feels like a continuation of the highly successful and still HOT HOT HOT 2012-2016 Southern & Northern Sky Series. I recommend staying on top of this series and not pay higher premiums when market fires up and demand kicks in. Earth looks lonely by itself, but hopefully the sun is next. That's what God did any way. It's impossible to keep up with every coin series, but I think this will be among the classic timeless winners. Not cartoons and extreme packaging. Just my thoughts.

First, it's from Royal Australia Mint, not Perth Mint. Anyone correct me? I hold gold Southern and North domed sky, so beautiful. I love the new earth and beyond series.

First, it's from Royal Australia Mint, not Perth Mint. Anyone correct me? I hold gold Southern and North domed sky, so beautiful. I love the new earth and beyond series.

I have all the silver Southern Sky and Northern Sky coins and enjoy them very much. High quality from the Perth Mint. I also bought the Gold Northern Sky and Southern Sky domed coins. Domed coins are visually attractive to me so I buy them whenever they are offered. Wonder how they are going to cover the other 7 planets (sorry Pluto) on only two coins.

one of the most visually stunning and interesting coins ive ever seen. Already has increased in value by 50% just 5 days after initial offering. This series looks like it could be an amazing one. This is the first year of only three and with such a low mintage i think this has a chance to be a big winner. Another Beautiful coin from the Perth Mint.