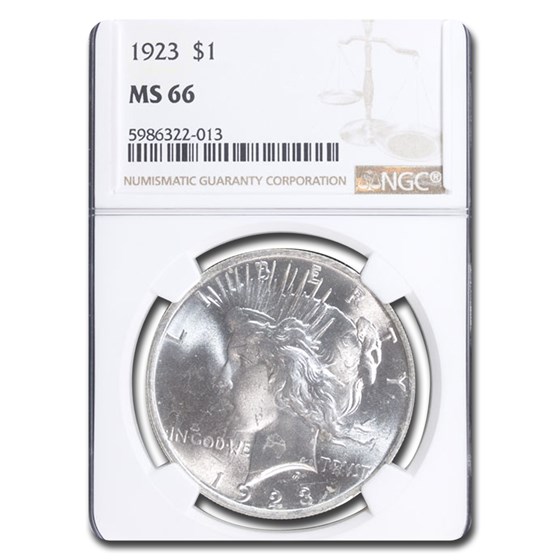 Product Details
Product Details
Used as currency nearly a century ago, these Peace Silver Dollars were minted to commemorate peace after WWI. This NGC graded 1923 Peace Dollar is perfect for any historical U.S. coinage collection!


Safeguard your Peace Dollar by adding an attractive Wooden Storage Box, made to fit up to 50 certified coins, to your order.

Add a piece of U.S. coinage history to your collection with the 1923 Peace Dollar, which will add instant value to any Silver Dollar collection. Add these NGC MS-66 graded Peace Dollars to your cart today!

Designed by Anthony de Francisci, a student of the famed sculptor Augustus Saint-Gaudens, who modeled the likeness of Lady Liberty after his wife – Teresa de Francisci. De Francisci, a young novice coin designer at the time, entered a competition with his designs held by the Commission of Fine Arts to design the new Silver Dollar. De Francisci said his goal with his design was to “capture the spirit of the country – its intellectual speed, vigor and vitality.”

The Mint's primary purpose was to produce coins for the United States. The first coins produced by the Mint were Copper Cents, which were minted in 1793. In 1794, Silver Dollars and Half-Dollars were added to the production line. In 1835, Gold coins were added to the lineup, followed by Platinum coins in 1997. Today, the United States Mint produces coins in a variety of metals, including Gold, Silver, Platinum, Palladium and Copper.