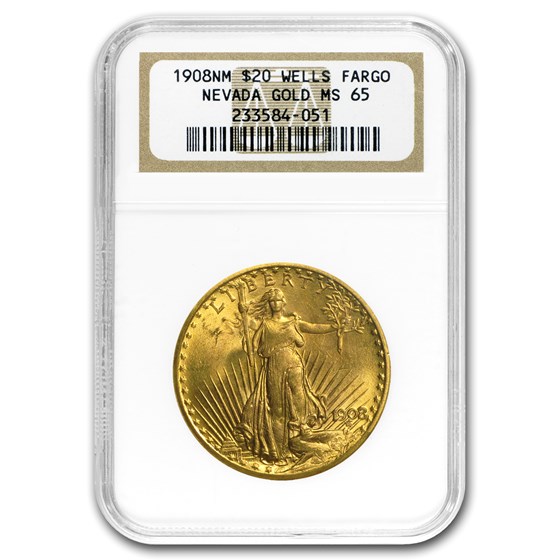 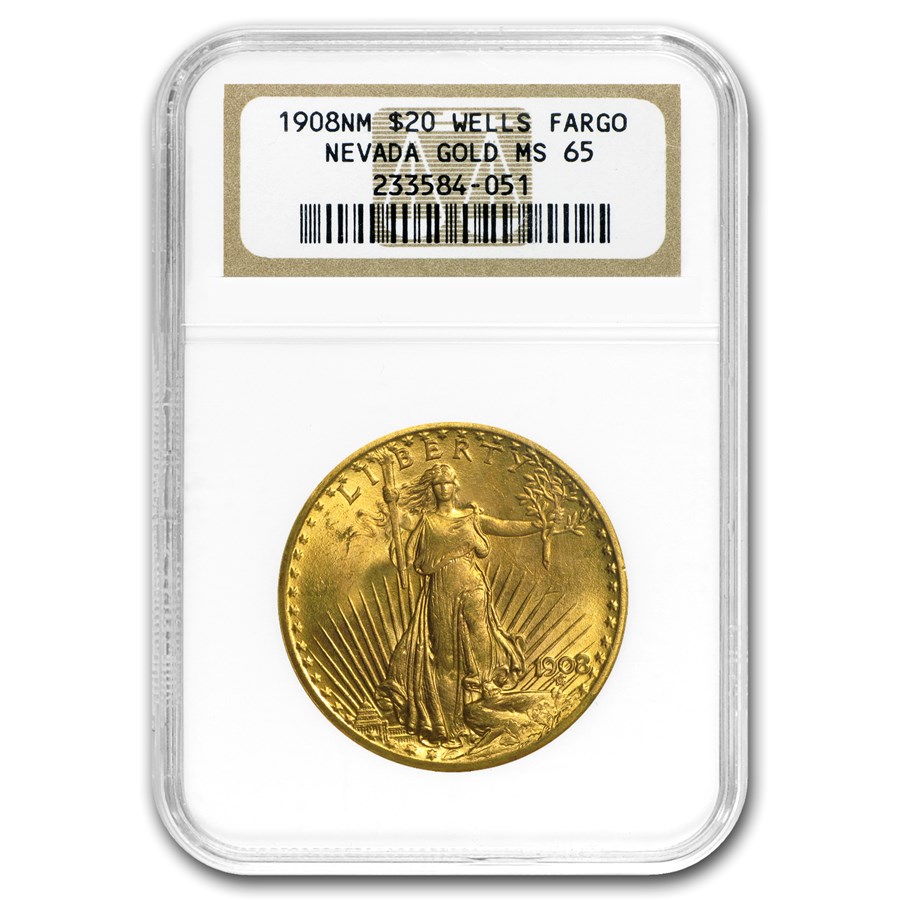 Product Details
Product Details
As a general rule of thumb, all 1908 Wells Fargo pedigreed $20 Saints are extremely nice and eye appealing, this one is no exception.

Protect and display your 1908 $20 St. Gaudens Gold No Motto MS-65 NGC (Wells Fargo) graded coin in style by adding an attractive display box to your order.

The Wells Fargo Nevada Gold hoard is an amazing collection of 1908 No Motto $20 Saint-Gaudens Gold coins. The hoard was purchased for more than $10 million and was the largest price paid for a collection of coins at the time by a very wide margin. In outstanding condition, over 95% are graded Mint State 65 or better.

A collector with foresight and the necessary means acquired this collection of $20 Saint-Gaudens Gold coins in 1917 and promptly hid them for safekeeping. There they remained undisturbed for more than 50 years. Hidden away from the public, these stunning coins survived several significant events that meant the end of many other Saint-Gaudens coins, including Gold confiscation via executive order in 1933.

In the early 1970s, the coins were taken out, sorted, inventoried, and resealed. They did not see the light of day again until their inspection and sale in 1996. Although the buyer is known, the seller is not: the buyer signed a strict confidentiality agreement guarding the privacy of the previous owners. Not until they met again was the true number known: over 15,000 $20 Saint-Gaudens Gold coins. The meeting took place at a Wells Fargo bank in an undisclosed city in Nevada. The coins were held in a large walk-in vault, which formerly served as a Federal Reserve Bank where Silver dollars were stored in the 1960s and 1970s.

The double eagles were rolled in paper tubes, placed in canvas bags, and stored in screw-top boxes in this vault. The coins were still surrounded by Gold dust when first inspected. While Wells Fargo does not claim to be the owner of these coins at any point in their history, their name is used for the pedigree. The name was selected because of where the coins were stored and the deal was negotiated.

Following the Coinage Act of 1792, the United States Mint began issuing Gold coins in 1795 with the Turban Head Eagle. This $10 Gold coin was struck by the United States Mint from 1795 until 1804. There are a wide variety of sizes and designs of pre-1933 Gold coins available but the majority of coins produced were the Liberty Head Gold Eagle, the Indian Head Gold Eagle and the iconic Saint-Gaudens Double Eagle. In 1850, in response to the Gold Rush in California and the increasing amount of Gold available in the United States, the Double Eagle was introduced. American Gold coins struck before 1933 are some of the most rare, desirable and beautiful in the world. From Liberty Head Gold $1 coins to $10 Indian Gold Eagles and the coveted Saint-Gaudens Double Eagle, these coins are a piece of history.

In the early 1900s, President Theodore Roosevelt called for a renaissance in American coinage. Unhappy with the current designs on American coins, he called upon sculptor Augustus Saint-Gaudens to head the redesign of America’s coins. Out of this renaissance came the Saint-Gaudens Double Eagle Gold coin. One of the most sought after and beautiful coins ever produced by the United States Mint, this Double Eagle was minted from 1907 until 1933. The design was later reprised in 1986 when the mint issued the new Gold Eagle bullion coin.

In 1933, President Franklin Roosevelt issued Executive Order 6102 which forbade the “hoarding of Gold Coin, Gold bullion and Gold certificates within the continental United States.” As a result of this order, the possession of monetary Gold owned by any person, partnership or company was criminalized, Gold coins were pulled out of circulation and almost all Gold was exchanged for paper money. Exceptions were made for collector coins and jewelry. As the Great Depression ravaged the economy, it was believed that “hoarding” Gold stalled economic growth and worsened the economic state of the country. In order to combat this, it was ordered that all Gold be turned into the U.S. Mint to be melted down. The belief was that if Gold could not legally be owned, it could not be redeemed, therefore ending the constraints on the Federal Reserve. Thus, the United States abandoned the Gold standard.

The following year, President Roosevelt signed the Gold Reserve Act of 1934. This act required that all Gold (except for jewelry and collector’s coins) and Gold certificates held by the Federal Reserve be sold to the United States Treasury. The law also changed the nominal price of Gold from $20.67 per troy ounce to $35.00 per troy ounce. Because of this, foreign investors flocked to export their Gold holdings overseas to the United States and the dollar devalued to spark inflation. The increase in the money supply increased real interest rates and encouraged more investments in durable goods. After the Gold Reserve Act, inflation drastically decreased from -9.8 percent to 2.3 percent and has not dropped below -2.1 percent since.

Because of Executive Order 6102, Gold coins produced by the U.S. Mint prior to 1933 are extremely rare. The coins that remain today have withstood the test of time and survived a governmental expropriation of Gold. These coins are a beautiful testament to the art and history of the coins themselves and the United States as a whole.

A piece of history

This beautiful coin is a great store of value.