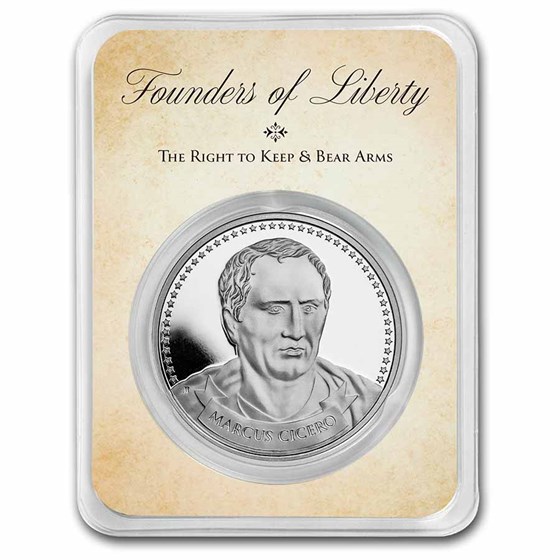 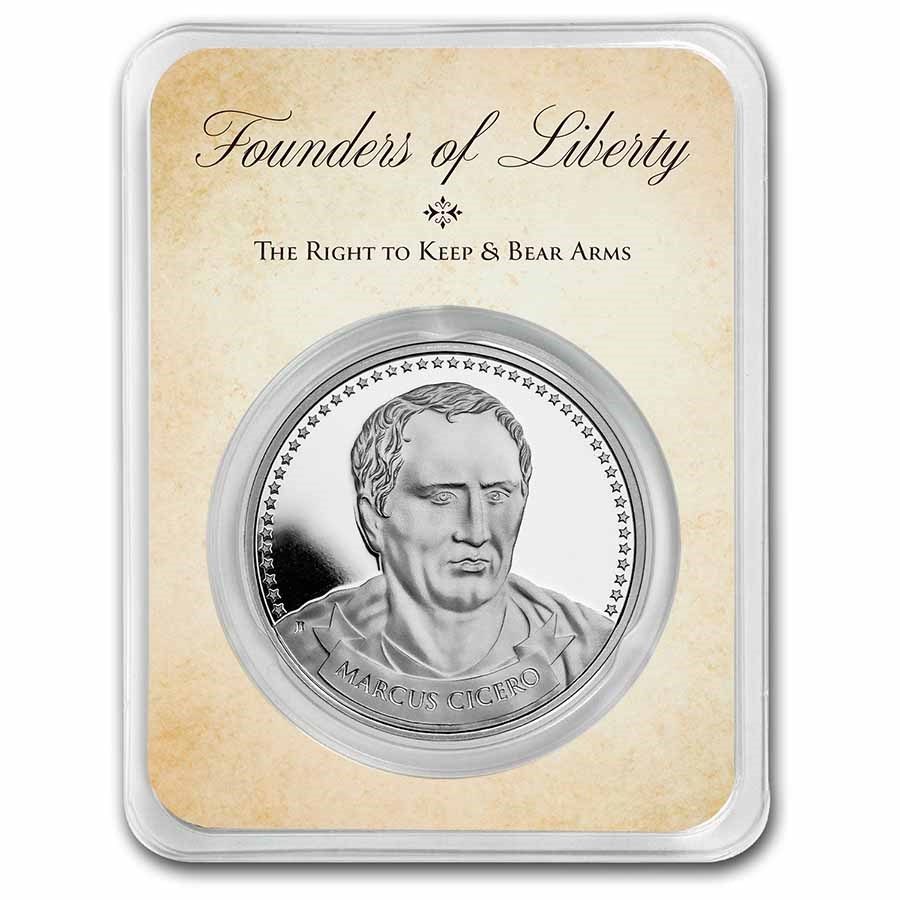 Product Details
Product Details
As low as $9.59 per round over spot
This is the second round in an exceptional collection from APMEX that celebrates the ideas that make freedom achievable, along with the men behind the concepts. Honor the right to keep and bear arms with Cicero.


You can show off your Cicero - Right to Keep and Bear Arms round in style when you add a special wooden display box to your order.

Memorialize the principles of liberty and grow your Silver collection by including this Right to Keep and Bear Arms Silver round to your cart today!

Marcus Tullius Cicero and the Right to Keep and Bear Arms
Marcus Tullius Cicero was a man of many gifts and resided during the time of 106 BC to 43 BC. He was most noted for his extraordinary intellect, but he also made use of his talents as a lawyer, scholar, philosopher and academic skeptic. He was well known for his productive writing and opinions on everything from philosophy to politics and rhetoric. Cicero is believed to be one of Rome’s most notable orators and prose stylists and is also credited with bringing the use of Latin to the academic domain.

The superb thinker was a lawyer and politician throughout his life and was an essential person during many historic moments of the Roman Empire. For example, he contributed to preventing a coup and later, during Julius Caesar’s chaotic rule, Cicero strongly levied for a return to a customary type of republican government.

Cicero’s viewpoint and republican stance motivated the Founding Fathers of the United States. Thomas Jefferson is even documented as stating that Cicero was one of the few key historical people he drew inspiration from when he drafted the Declaration of Independence. Cicero was for every citizen’s right to bear arms so that they could act in self-defense and protect their community from tyranny.

Founders of Liberty
Founders of Liberty is a distinctive series of rounds primarily from APMEX that celebrate the concepts that make freedom possible. These ideas are portrayed with symbolic representations on the reverse of every round while the obverse features a historical figure who either developed the idea or was picked as the idea's best representative. These rounds feature dominant voices for liberty, including U.S. Founding Fathers and the individuals they looked to for inspiration.

Each release in the collection offers a valuable, limited mintage antique round that comes in a special display box and certificate of authenticity, along with unlimited bullion investment rounds of the same design. These bullion rounds can also be acquired in special tamper-evident packaging, which is an excellent alternative to the antique display round if its limited mintages sell out before you can order.

We are never more than one generation away from losing out on freedom. Hand these important principles on as gifts to the next generation or grow your Precious Metal holdings in a way that respects the people and ideas that made such wealth possible.

I just picked up a couple of these in TEP. I already have the Ben Franklin in this series. Cicero's quote about every individuals right to defend themselves and others is the truest I've heard. This is a great series of rounds. I've purchased almost 15 pounds of silver from APMEX and have been fully satisfied every time. The final paragraph in the product description for this product is the reason they have earned my business for life, not to many places would even touch that subject matter these days. Looking forward to the next piece in this series.